Wrestler trains with Olympians to improve after last season 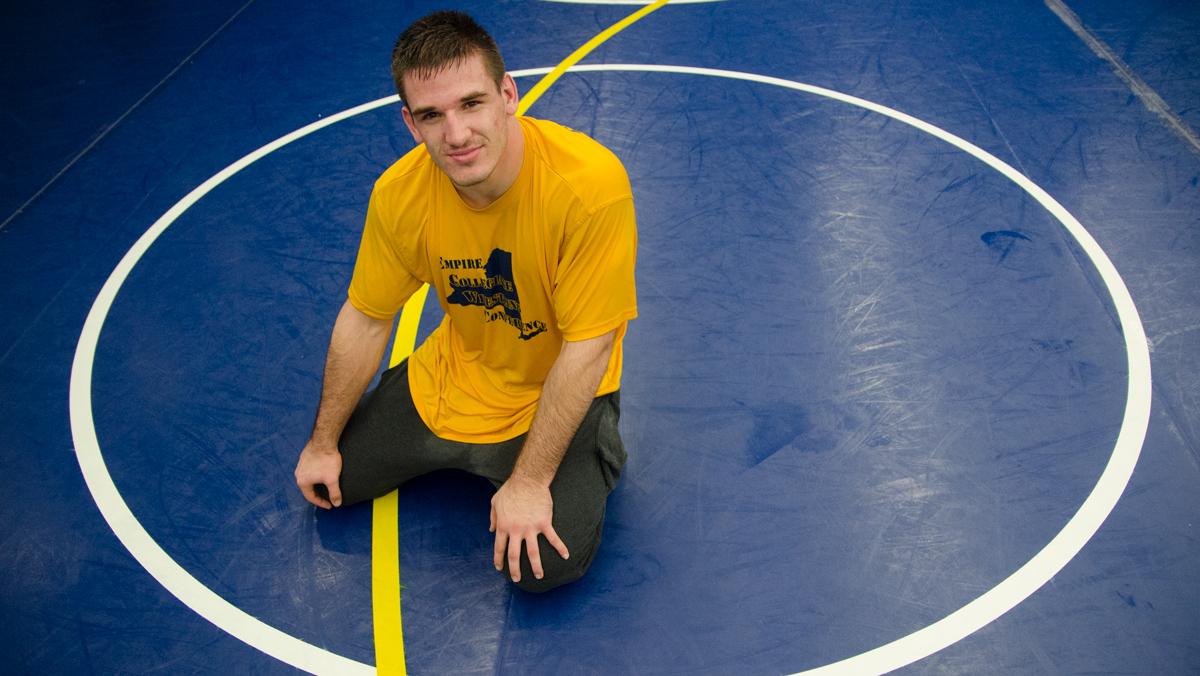 Once the 2016–17 wrestling season ended in March, junior Jake O’Brien, began looking for a training center to help him improve. He then found the New York Regional Training Center at Cornell University, which has trained wrestlers who have qualified for the Olympics, and has been training there ever since.

O’Brien stayed in Ithaca over the summer so he could continue training there. During the summer, he had about four to five training partners whom he trained with Monday through Friday from 4 p.m. to 6 p.m. Now, O’Brien goes to the training center once a week.

“I mainly went to train there because last year at Nationals, I took eighth,” O’Brien said. “I just really wasn’t completely satisfied, and I thought I had a lot more and a lot higher goals. I just wanted to get better at wrestling, and I thought that was the best place to do it.”

O’Brien, who is 285 pounds and a heavyweight, said finding the right partners and coaches to train with is important, and it was not difficult to for him to decide on the New York Regional Training Center.

The training consisted of freestyle and Greco-Roman, but focused on the Greco-Roman style of wrestling. This was new for O’Brien, as he had only wrestled folk–style in the past.

“I wrestled a lot of Greco, which is different than folk style that we wrestle here, so it helped me in positions that I was weak, so I definitely got a lot better from there,” he said.

The Greco-Roman style of wrestling focuses on positions involving the upper body. O’Brien said the upper body is something he wants to improve.

The folk style is the style of wrestling that is used at the high school and college level.

O’Brien said he believes he can now wrestle anyone because some of the wrestlers who train there are the best in the country. O’Brien was training with 2016 Olympic qualifiers such as Zach Merrill and Enock Francois. Kyle Drake, a three-time Team USA member, also trains at the facility.

An average day of training for O’Brien was much different than what he said he was used to because the warm-ups for the two styles of wrestling differ. The warm–up process for the Greco-Roman style included dynamic workouts designed to improve and increase athleticism, body awareness and physical conditioning that the training center called “ocean of motion.”

“The warm–up we do there is different; this is because we take an Iranian-Russian style rather than the traditional,” O’Brien’s trainer Ahad Javansalehi said. “After that, we would do workouts to increase agility and body awareness, work on technique, wrestle a little and end on some strength training.”

Head coach Marty Nichols said he believes that training at the New York Regional Training Center gave O’Brien a more diverse skill set. In collegiate wrestling, wrestlers shoot for the legs, but in Greco-Roman, wrestlers focus on shooting at the arms.

“He wasn’t schooled up very well on the upper-body throws, technique and how to maneuver around, so this has really helped him a lot in that area of his game,” Nichols said.

Nichols said that even though the season has just started, he has seen a difference in O’Brien’s wrestling.

“The last guy he wrestled from Kent State — he’s probably like one of the top 10 wrestlers in Division I — he’s probably like 6’5”, 280 pounds,” he said. “Just being able to fight with him and stay in good position is a lot further ahead than he was last year at this time.”

O’Brien lost the match by a 6–1 decision.

O’Brien currently has an overall record of 1–1 in meets after defeating junior Jesse Webb of Castleton University and losing to Malik McDonald, redshirt junior wrestler at Division I North Carolina State University, on Nov. 11 in Clifton Park, New York. O’Brien will be competing against more Division I wrestlers as the season continues.

O’Brien said he is continuing to go once a week to become a better wrestler and perform at a higher level in the NCAA Wrestling Championship.

Nichols said this is a realistic goal because the wrestlers O’Brien is training with are roughly his size.

“They’re bigger guys — little faster, stronger guys — and getting used to that type of level guy helps you in the big matches, like when you get to the national quarterfinals, semifinals and finals,” Nichols said.

Javansalehi has high hopes for O’Brien and said he believes O’Brien can make it all the way this season.