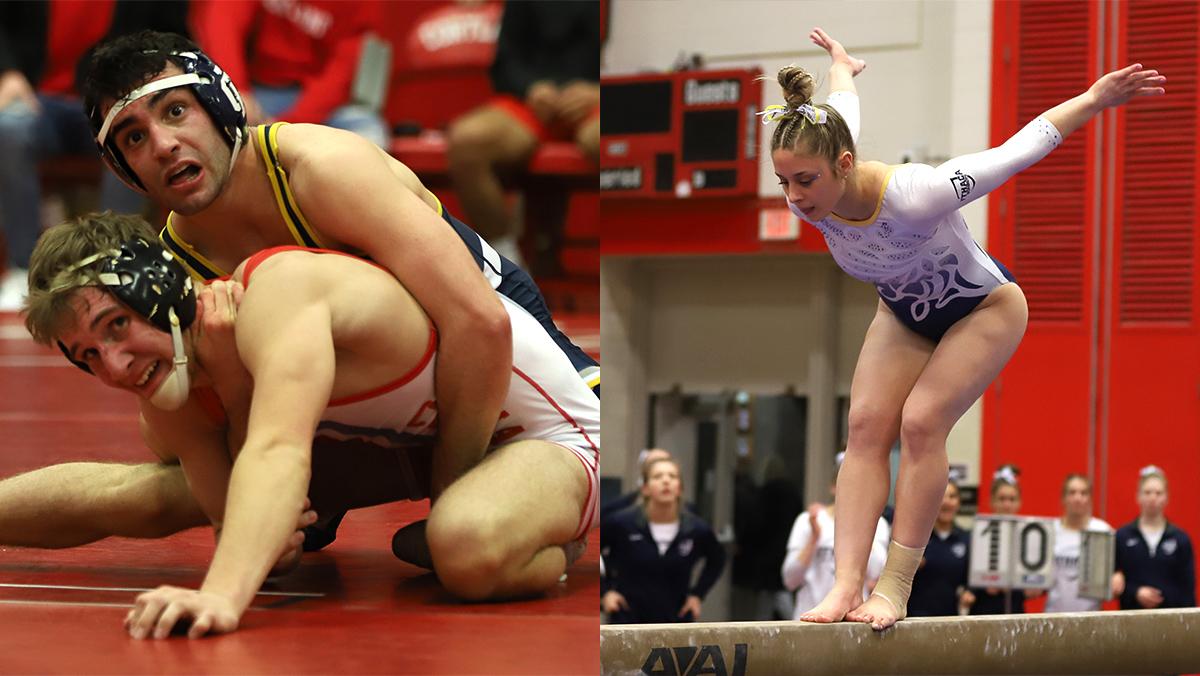 The Ithaca College wrestling and gymnastics teams went head-to-head with the SUNY Cortland Red Dragons in the fifth annual Rumble and Tumble event for the first time in two years Feb. 16.

The Bombers dominated in both sports, posting a 187.90–184.475 gymnastics victory and a 24–21 comeback win in the wrestling portion. The rivals faced off at Whitney T. Corey Gymnasium in the first Rumble and Tumble meet in two years because the Liberty League canceled the 2020–21 winter season as a result of the COVID-19 pandemic. During the event, both the wrestling and gymnastics teams competed at the same time. To junior gymnast Nya Pauldon, the meet is an anticipated event each season.

Pauldon said she and her teammates struggled returning to the mat this season because of the time missed from the canceled season. Although the team was able to get together to practice for the Spring 2021 semester, she said part of being on a gymnastics team is competing and setting goals for higher scores in events.

“Gymnastics is a lot about goal orientation and having a set timeline to get there,” Pauldon said. “I think we felt a little lost at first … but we were thankful to get back into the gym together and start getting new skills, making new bonds and just being able to train.”

Gymnastics head coach Rick Suddaby said the yearly meet has a special significance as a SUNY Cortland alum. He said each year he looks forward to the event as an opportunity to connect with past friends and colleagues.

“It’s always fun to compete with Cortland, and it’s fun to mix the crowds in that, and so we have a lot of fans at either one that hosts,” Suddaby said. “When we go to Cortland, I see people that I know who I’ve worked with or studied with.”

The Bombers posted a solid effort in the last Rumble and Tumble meet, taking home a strong victory in wrestling by a score of 31–9 but falling just short in gymnastics with a final score of 188.150–185.550.

“When you look at our program, after two years, we’re a completely different team,” Suddaby said. “There’s lots of underclassmen who have never been to this event before.”

On the wrestling team, senior Eze Chukwuezi said he enjoys the annual event as well. He was a key contributor to the Bombers’ victory in the 2020 event, defeating Kevin Morgans 14–2 by major decision.

Chukwuezi said the high energy from crowds coming to see either competition adds extra excitement to the sport. Even though the Rumble and Tumble is an important rivalry event, Chukwuezi said he does not let it intimidate him. Over the years, the colleges have developed a rivalry through athletics, with their campuses being located just 23 miles away from each other.

“I treat it about the same as any other match, but the day of is definitely a little more exciting than the other ones,” Chukwuezi said. “Cortland is always a fun event whenever we wrestle them, so there’s a little bit more fire under us, but nothing really changes in preparation.”

“They are a tough team, so I think we’re hoping to blow them out of the water,” Chukwuezi said. “The goal is to have fun, be aggressive when we’re wrestling, and keep the energy high.”

This attitude has helped the Bombers this season, as they were riding a four-match winning streak and had a 4–0 away record prior to the Rumble and Tumble. Wrestling head coach Marty Nichols said he enjoys the atmosphere at the event and believes that this environment can help his wrestlers moving forward.

“The nice thing about it is that with the gymnastics going on at the same time, it’s pretty loud in there, which is great because it really gives you a chance to focus in,” Nichols said. “You’ve got to really listen, you’ve got to really be tuned in on what you’re doing. It’s good practice for the regional tournament.”

Suddaby said the event is a turning point in the season to continue to grow at a consistent rate. At the Rumble and Tumble, he said to look out for freshman Jillian Freyman who competes in the vault, beam and floor events.

“We’ve developed into a well-rounded team, which is nice, but [Freyman] is doing very well,” Suddaby said. “She’s had more scores over 9.5 than anyone else on our team.”

Suddaby said the goal for the gymnastics team this season is for everyone to score in the 9.5 range. Freyman acts as a leader for the rest of the team to follow to score at a competitive level.

“We have a handful of kids approaching her consistency and level,” Suddaby said. “It’s fun to have that kind of leadership, especially from the freshman class.”

The Rumble and Tumble meet closed out the regular season for the wrestling team, while the gymnastics program will conclude the campaign March 6 against Springfield College.

Let’s Get Ready to Rumble and Tumble!