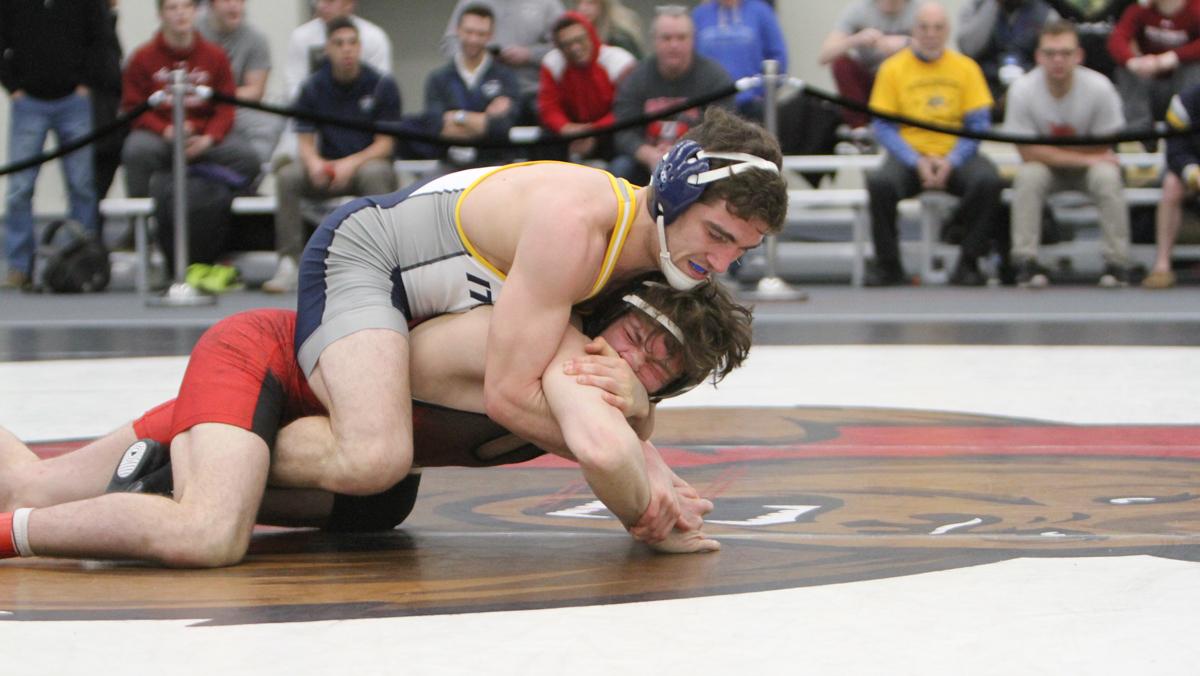 The No. 3 ranked Ithaca College wrestling team won the Mideast Regional Tournament over 16 other teams with 145 points.

In the two-day tournament, the Blue and Gold came out with a commanding lead after day one posting 82.5 points to put them 26 points ahead of second-place Stevens Institute of Technology at 56.5 points.

The Bombers had a very successful start to the tournament. During day one, they qualified for the second day in all but one weight class, which was the 197-lbs class. In 22 matches, the team took just three defeats on the day to set the tone heading into day two.

The only defeats that the team took on the first day were from the 149-lbs weight class where Junior Demetri D’Orsaneo was 5–4 on the day and in the 197-lbs weight class with freshman Dymir Davis-Carruth who was 1–2.

Day two for the Blue and Gold began just as they hoped. The team pushed its way through the beginning of the day placing six of the nine wrestlers into finals matches while the other three took top six finishes.

After being defeated in his first match of the day, 133-lbs sophomore Tito Colom found a way to fight back all day and finish in third. D’Orsaneo kept his fight going by working his way into the 3rd place round where he fell to sophomore Dylan Van Sickell of Stevens. The other non-finalist for the Bombers was 157-lbs junior Austin Whitney who did not record a victory after being injured in his second match to place sixth.

Although the team had six finalists, all but Ashcraft were defeated in their matches.

Named NWCA Mideast Region coach of the year on Feb. 23, Coach Marty Nichols said that he was proud of his team’s performance this weekend.

“It was an awesome job,” Nichols said. “Obviously we would have liked to have won some more of the weight classes but we had six in the finals and some of those matches might be NCAA finals matches.”

“The team goal and the individual goal is the same and that is to win it all,” Ashcraft said. “To win a national title.”

With only the NCAA tournament ahead, Nichols said that this team has the potential to become the next champions.

“We’re pretty solid and that’s why we are ranked third in the country,” Nichols said. “We’ve got a good group of guys going to Nationals and anything can happen when you get going.”

The next match for the Bombers will be the season finale as the team will head to Cleveland, Ohio on March 9 and 10 for the NCAA national championship meet.

No. 3 wrestling dominates against Wilkes University