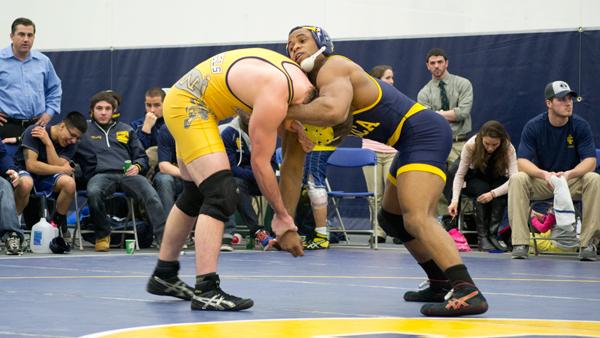 For more than 10 years, the wrestling team has punched its ticket to the national championship via the Empire Conference Wrestling Championships. This season, the road will be a little different.

With a new format put in place for the championship run, obtaining a championship title may be more difficult for the Bombers.

In May 2012, the NCAA drafted a new arrangement increasing the number of teams in the postseason from 170 to 180 teams. All teams will take part in one of six NCAA regions, from which the top three at each weight in the region will qualify for the championship round. There will no longer be wild cards, and each weight will have 18 qualifiers.

In the 2012 postseason, the Bombers only faced eight teams in the ECWC tournament. Now, with ECWC’s off the docket in this year’s schedule, they will face a field of 17 other teams in the Northeast Regional Championship, which will take place March 2-3 at Worcester Polytechnic Institute.

Not all regions have the same size regional tournament. The West, Central and Midwest divisions all have between 11 and 12 teams each, while the East, Northeast and Mideast have between 17 and 18 teams.

Head Coach Marty Nichols said the alignment might look skewed because of an unequal number of competitors in each region, but it is something the Bombers will have to push through.

“We can’t do much to control what the NCAA does, all we can do is wrestle where we’re scheduled and hope we can get as many guys to nationals as possible,” he said.

Senior captain Jules Doliscar said the new tournament style will be a bit tougher in terms of preparation, because he and his teammates are likely to face some opponents they are not familiar with.

“Last year, we had seen most of the guys [in nationals] when we had ECWC, and now we have a bunch of guys from schools we haven’t faced all season,” he said. “It will be a challenge but one I think will keep us more focused on the goal of getting to nationals and winning there.”

Last season, the Bombers took six individuals to the finals, but with the region only taking the top three in each weight class and no wild cards making it to the next round, Nichols said it could be a challenge to match the same number.

Despite the change in style, Nichols said the tournament change is a great opportunity for his team, even with the increase in the number of teams.

“Our guys like the challenge, and I think it’s a great chance to show what we can do against, not just some of the best in the state, but the best in the Northeast as well,” he said.

Junior Shane Bartrum said the new alignment may have its disadvantages for the Bombers, but he also mentioned that it will be a good rest and recovery point because of the extra week in between the end of the regular season and postseason.

“After the regular season, we’re usually jumping into ECWCs, but now we can enjoy some extra time as a team and head to the regionals ready to do what we can to make it to nationals,” he said.

Nichols said the team should be prepared for tough matchups at this point in the season because of additional rest time and the level of competition they have already seen.

“We have faced and beaten teams ranked higher than us, so we know anything can happen in both the regional and national championships when we get there,” he said.