Wrestling team hits its stride in crucial month of February 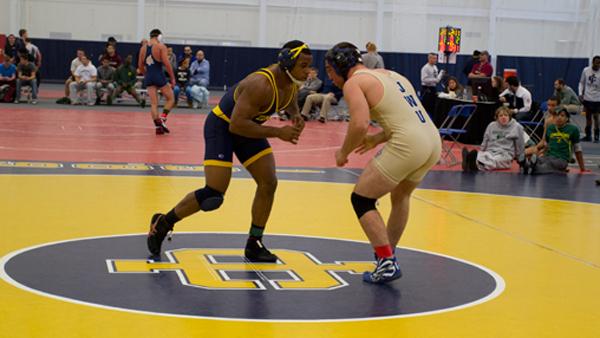 The wrestling team’s record of six wins and three losses doesn’t exactly turn heads in the Empire Collegiate Wrestling Conference, but historically when the calendar turns to February, the Bombers are one of the most difficult teams to defeat.

Though they have accrued more losses than anticipated so far this season, the team is not panicking. The Blue and Gold have not lost a dual match in February since the 2007-08 season, when they dropped their final dual meet of the season to Cortland.

After having dropped out of the Division III top 10, the Bombers are holding onto an 11th-place ranking at this point, registering two of three losses to ranked opponents. The Bombers were able to defeat 8th-ranked Coe College at the Division III National Duals, lost to 1st-ranked Wartburg College and were upset by 30th-ranked Wesleyan University.

Despite some team losses, senior Captain Jules Doliscar maintains a perfect 8–0 record in dual-meet matches, while totaling 24 wins total this season. For the second consecutive year, the 174-pound light heavyweight has been a focal point in the Bomber’s success with a championship win at the Empire Collegiate Athletic Championships. With 24 wins this season, he is on pace to match his victory total of 33 last season.

Fellow senior Ricky Gomez shares a 2nd-place ranking with Doliscar, as he is ranked 2nd in the 125-pound weight class. Gomez, along with Doliscar, was the only other athlete to record a win against top-ranked Wartburg. Head Coach Marty Nichols said he always has looked to his seniors to carry the weight and deliver when it counts.

“We look to guys like [Doliscar and Gomez] to perform very well every time they step out on the mats because they’ve been in the same situations before,” Nichols said. “We need other guys to step up, but we always know that [Doliscar] can get us points when we need them.”

The team plans to put its losses behind it and look ahead to their February meets. With NCAA Northeast Regional Championships early in March, the team knows how important its performance in February is. Doliscar said the team has performed well in March because it rises to the challenges and ups its performance during this important stretch.

“Around this time is when we should be performing our best,” Doliscar said. “We need to take each matchup as they come, but I’m confident that we’ll perform well and put ourselves in the best position to do well come March.”

The senior class has been especially successful during the team’s past February winning streak, collecting 41 victories in 46 dual meet matches over the previous three seasons. Nichols said some of the team’s February success comes from rematches with familiar opponents.

“In February, we get some rematches from earlier in the season, and our guys are even more motivated to get the win this time around,” Nichols said.

Despite these records, Nichols said February will be tough, given the ranking of the competition and the time in between matches.

“It’s always one of the most difficult parts of the season, but it gets us ready for what we’ll see down the road,” Nichols said.

Even with a tough stretch of matches in the month, junior Shane Bartrum said that besides history, he and his teammates have not enjoyed this season any less regardless of their record or ranking.

“All year we’ve just been enjoying our time together, whether it’s in practice, competition, or on the road,” Bartrum said. “No matter what, I think this month will be a lot of fun even if we are facing some of the best down the stretch.”