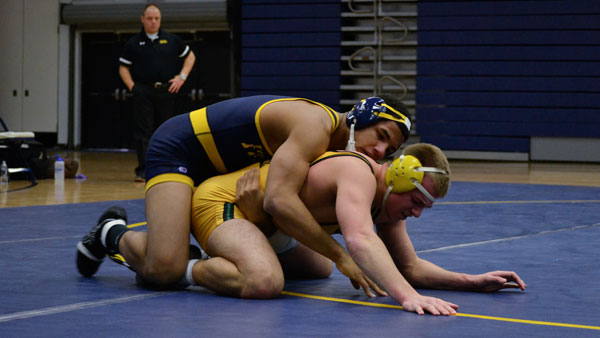 For the third time this season, the wrestling team lost on a tie-break decision. With a final score of 18–18, the Blue and Gold were defeated 19–18 because of a pin in the 125-pound weight class.

The Bombers fell to Delaware Valley College on Feb. 1 at Ben Light Gymnasium to make their overall record 8–4.

Coach Marty Nichols said he was frustrated that the team had its third tie-breaking loss.

“Everything comes in threes, so I’m hoping that this is it,” he said. “It comes down to the close matches. I thought we had the guy pinned at 197, and I thought we had a takedown at 184, but their guys battled hard and came back. We were right there. We just need that little bit extra. We need to keep pushing.”

During Wahba’s match, quick injuries from Davidson stopped his momentum. Wahba said it’s all about having the mentality to continue wrestling when an opponent gets injured.

“Sometimes keeping momentum going is the hard part,” he said. “I have good coaches and good teammates to keep me going. It’s all mental.”

“I just haven’t been able to wrestle at my best, but you just deal with it,” Toribio said. “It’s all about mental toughness.”

The Blue and Gold return to action at noon Feb. 8 in Oneonta, N.Y., to take on Wesleyan University.