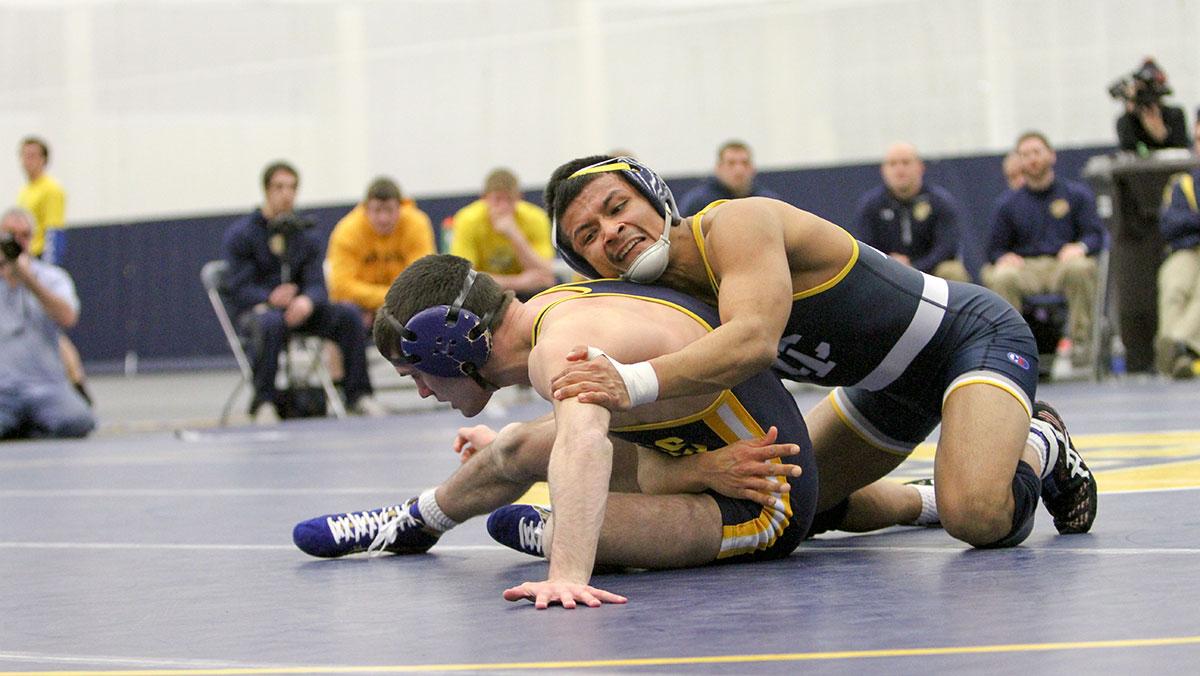 When faced with steep competition at the climax of the season, any team would look to seize the opportunity to perfect every tactic before the event. That is the situation the wrestling team has found itself in throughout the home stretch of its season, heading into the NCAA Tournament.

The Bombers have had a great deal of success this season and are currently ranked 10th by d3wrestle.com with a number of team members that have individual rankings as well.

As a team, the South Hill squad has been victorious in seven of its last eight matches, with the only loss coming against the University of Wisconsin La-Crosse ranked sixth in the conference. The seven victories came in a variety of ways as the Bombers had a balanced mixture of dominance and competitive matches, winning four matches by 17-plus points and the other three with narrow victories of six and four points.

Head coach Marty Nichols said he believes wrestling against such good competition will help the Bombers prepare for regionals.

That test will come in handy for the Blue and Gold as they are looking to progress through regionals as a team. With three nationally ranked wrestlers and multiple wrestlers that are contenders for the top 10 in their respective weight classes, a great deal of success could be headed the team’s way.

A team like this only comes around once in a while, and Toribio said he knows it.

“This is the best team we’ve had so far that I’ve seen,” Toribio said. “We can do it all, and we expect to bring a full house to nationals.”

It may seem like a bold prediction, but it is not out of the realm of possibility. The Bombers have been performing well all year, whether competing in dual matches or tournaments.

In the middle of the seven-match stretch, the Bombers competed in the Empire Collegiate Wrestling Conference championship in Oneonta, New York. The team finished first of the eight teams in the conference to take home the tournament championship.

Each Bomber had to win his own individual tournaments to give the team a collective victory, which is similar to the way the regional tournament is constructed. To progress to nationals, an individual wrestler must place in the top three in their weight class. If enough wrestlers place, the team could then be sent to nationals as well.

Nichols said he sees the possibilities that lie in front of his squad.

“I really think we have 10 guys that could go to the national tournament,” he said.

The likes of Toribio, Gomez, senior Kevin Collins, junior Eamonn Gaffney, Kashian and freshman Nick Velez will be counted on to lead the team.

Throughout the tournament there are many intriguing matchups that will be played out. SUNY Cortland will be looking for revenge against the Bombers, while No. 14 Roger Williams University, No. 15 Johnson and Wales University and unranked Wesleyan University could potentially turn into tough matchups for the team.

A big individual matchup to look forward to is Gomez against Nathan Giorgio from U.S. Coast Guard Academy, who is ranked second in the nation. The duo met previously in the season at the York Invitational, which resulted in a Giorgio victory.

Gomez said he has since been preparing for the rematch.

“I’m getting ready to get back out there with him,” Gomez said. “I wasn’t prepared the first time we wrestled. I know what I need to do now and I’ll be ready to go.”

Part of that preparation includes increased conditioning to keep his weight down and practicing tactical moves that can be used during the match.

The Bombers are trying to keep the atmosphere light at practice and stay positive while they head to the climax of their season. Nichols said the Blue and Gold are training well.

“We’re having a lot of fun in practice,” he said. “The team is upbeat and having a good time. They’re still getting better every day, trying to improve. If they continue to improve, good things are going to happen.”