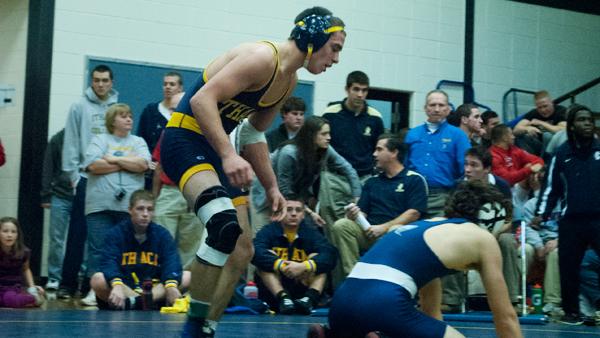 File photo/The Ithacan
Then-freshman Dominick Giacolone takes position against a Centenary College opponent during the 2010 Ithaca Invitational in Ben Light Gymnasium. Giacolone has come back this season after suffering from a knee injury.
By Steve Derderian — Staff Writer
Published: February 6, 2013

Approaching the conference and national championships last season, the Bombers wrestling team’s record was 11–2. For junior captain Dominick Giacolone, this final stretch wasn’t in the cards. A knee injury suffered during a match against Stevens Institute of Technology forced him to be a spectator for the remainder of the championship run. Now that he is back on the mats for the Blue and Gold, Giacolone is trying to make up for lost time.

The 141-pound captain finished with 14 wins last season, and his return may bring extra energy to the team. Giacolone said he turned into the biggest team supporter because he knew many of his teammates had a shot of winning national championships. Now he faces the challenge of transitioning this charisma off the mat into wins on the mat.

“It definitely gave me a different perspective on things,” he said. “I almost turned into an assistant coach and was helping the other guys get ready for matches.”

His efforts paid off, as several members of the team, including national championship winners Seth Ecker ’11 and Jeremy Stierly ’11, cited Giacolone as a source of motivation. Senior captain Jules Doliscar, who also made an appearance in last season’s national championship tournament, said Giacolone was especially inspiring, even as an underclassman.

“He’s a dedicated and hard-working athlete who always wants to be out on the mats giving it all he has,” Doliscar said. “I can’t imagine having to miss all that time after working since the fall and having to miss wrestling in the biggest part of the season.

Giacolone’s brother Josh, who is in his first year as a member of the wrestling team this season, said it was tough hearing that his brother was injured because he was worried it may keep him from wrestling permanently.

“Injuries happen all the time, but it’s really difficult when it happens to a member of your own family, because you just hope that it won’t affect [him] and hinder the rest of his life,” he said.

Giacolone saw his first action this season on Jan. 5 at the North-South Duals at Ursinus College. Giacolone won his first matchup of 2013 defeating PJ Schmitt from The College of New Jersey 2-1 by decision. This season he has won six of his nine matches in competition. Overall he has won 25 matchups, including an 11–4 record in dual meet matchups.

Though he was cleared to wrestle at the beginning of the new year, Giacolone said he has needed to take certain precautions, but when he’s in competition, he said, his injury has to become an afterthought.

“I’ve been doing my best not to think about it when I’m out there,” he said. “I think if you’re too worried about getting hurt again, you’re not really helping the team or helping yourself do your best.”

Doliscar said Giacolone was an important asset to the team last year, and having him back is a positive influence on the team’s performance. Head Coach Marty Nichols said he sees improvement in Giacolone’s wrestling and technique but still said there is work to be done.

“He’s not back to where he was when his season ended last year,” Nichols said. “He’s come a long way, and to fight back the way he did shows a lot of character and patience on his part.”