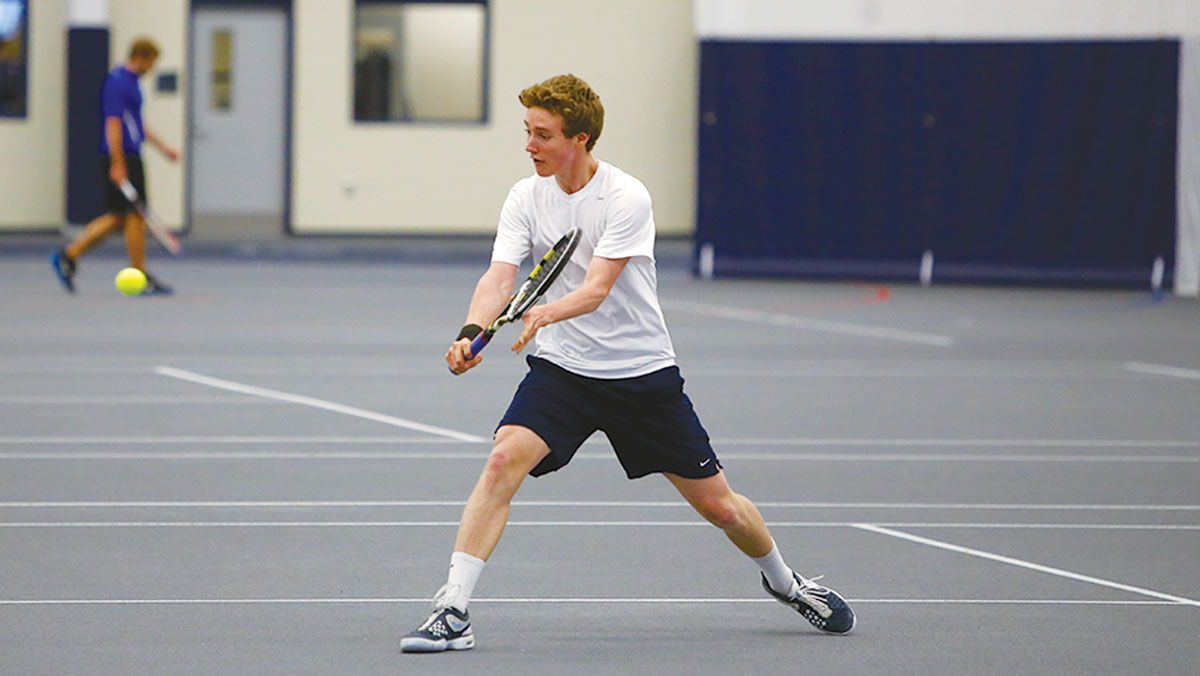 After finishing with a 10–8 record and falling to Stevens Institute of Technology in the Empire 8 tournament championship match last season, the men’s tennis team will take the court once again this year with new goals in mind.

Head coach Bill Austin said the team has had a constant goal throughout the year, even prior to the start of the season: to improve each day regardless of how poorly they are playing. Austin said he tells his team, “Let’s be a little bit better tomorrow than we are today. Let’s find out how good we can be when we don’t have our ‘A’ game.”

This long-term goal is something he said he believes resonates with his players, especially the younger athletes. Experience for this year’s group is lacking, and youth will be the main obstacle the Bombers must overcome if they want to have a shot at the Empire 8 championship.

Of the nine players on the roster, the Bombers sport just one upperclassman, junior Chris Hayes. Austin said Hayes will use his previous experience on the team to help guide the young squad through the ups and downs that accompany every season.

Another, more specific goal the South Hill squad is trying to accomplish is to defeat Stevens, the foe who has bested the Bombers four-consecutive times in the conference championship. Since the 2010–11 season, Austin said, the inability to overcome the Ducks is something that has haunted the Blue and Gold.

Austin said the team is hungry to beat Stevens and must find a way to translate that hunger into productive points.

“We need to outwork them,” he said. “We are going to work our butts off for the final point.”

This season, if the Bombers want to have any shot at silencing the Ducks, it will need to rely largely on their underclassman. Despite what may appear to be inexperience, sophomore Wes Davis said the squad is going to surprise its opponents,

“The team has much more maturity than what people give them credit for and are better than what many people expect,” Davis said.

The South Hill squad also has a new assistant coach, Rich Bonfiglio, who Hayes said has brought a new attitude that teams of the past never experienced.

“Coach Bonfiglio brings a different type of mentality to the team, which emphasizes hard work and positivity regardless of the score,” Hayes said.

Bonfiglio joined the Bombers’ tennis staff this season after serving in the same position at Trinity College for the past three years. The team is hopeful Bonfiglio’s presence will help it earn more victories this season and achieve its biggest goal of advancing to nationals.

Bonfiglio echoed Austin’s comments on the hard-working mentality of the team, which, at nine athletes, features five fewer than last year’s squad.

“We’re looking to instill a new work ethic on this team,” Bonfiglio said. “Giving 100 percent on the court, the idea of loving to compete and making sure the players grow as individuals are other things we are looking forward to seeing this season.”

This group of young Bombers has already been tested early, as it lost to the University of Rochester on Feb. 21, marking the sixth-consecutive year that they have been defeated by the Yellow Jackets. Next up for the Blue and Gold is St. Lawrence University on Feb. 28.

Despite the slow start, Hayes said Bonfiglio’s never-give-up attitude paired with the excited new athletes could make for an interesting and surprising year for the Bombers.

“We’re going into this season with much more confidence,” he said. “We think we should be able to win every one of our matches.”