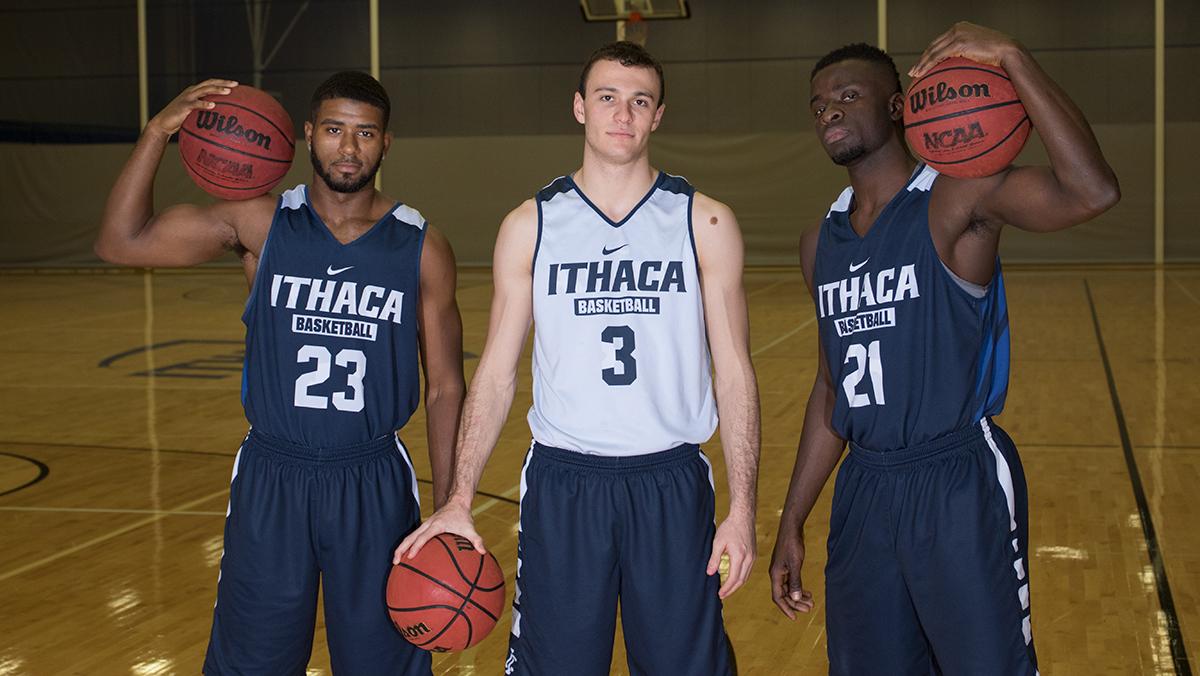 After finishing with a 15–13 overall record and 7–9 Empire 8 Conference record in the 2015–16 season, the Ithaca College men’s basketball team is focused on making it back to the Empire 8 tournament this season.

Having only one senior graduate last year, Sam Bevan ’16, the team kept its core players from last season. Bevan made a team-high 62 three-pointers on 36 percent shooting, led the team in assists with 6.5 per game and averaged 34.9 minutes per game his final season.

Though the Bombers don’t have any seniors on the team this year, men’s basketball assistant coach Sean Burton said other players will be stepping in to fill a leadership role.

“Losing Sam and his leadership is going to be huge,” Burton said. “It’s going to be a completely different dynamic in terms of leadership. Marc Chasin has done an amazing job of stepping into that role, and I think he’ll flourish in that role.”

Head coach Jim Mullins said the experience his young team has gained will bring it success this season.

“We’ve got a lot of young guys who played a lot of minutes last year,” Mullins said. “We’re young, but we’re young veterans.”

The coaches and players recognize that having only one graduate while bringing in six freshmen will be beneficial to the team. Burton said the freshmen on the team are learning quickly and will make an impact right away on the court.

“Right now, we’re excited about the guys that we have,” Burton said. “They’re fitting in right away with the team. They all have high IQ’s, so the transition at practice has been very smooth. We have three talented guards and two forwards who we think can help us right away, so we’re excited.”

Junior guard Carroll Rich has been designated the other captain alongside Chasin. Mullins said he’s confident in the team’s choice of captains this season but did mention that this is not definite.

“They voted on it last year, but my intent at the time was to see how things went and vote again next year to give the six new faces on the team a voice,” Mullins said. “I don’t really anticipate any change. Carroll and Mark are our designated captains, and I think everyone sees them that way, so I think that’s how it will turn out.”

Chasin said his goal is to keep everyone involved while also using his experience to help the team grow.

“It’s really our job now to take the younger guys under our wing and make sure they’re doing the right things and just lead by example,” Chasin said.

Chasin, who led the Bombers in scoring last year averaging 20.8 points per game, said he plans to retain that statistic despite the stereotype of captains’ being playmakers more than being scorers.

“Obviously, I’ll be looking for my teammates, and I have playmaking abilities, but I’m not going to be changing the way I play just because I’m a captain,” he said. “If anything, I’m just going to stick to my game and do what I do best.”

The Bombers finished second in the Empire 8 Conference in scoring last season. However, Mullins does see room for improvement in team defense, which ranked last in points allowed.

“We scored enough points last year to win more games than we did, but we gave up too many,” Mullins said. “I’m not aware of too many teams who have done well in basketball without playing some good defense, so it’s definitely a point of emphasis.”

The Bombers also enter this season having finished seventh in rebounding, averaging 38 per game. Burton said he thinks the team can build on mistakes from last season despite lacking a common quality associated with basketball players.

“We may not have height, but we aren’t small in the sense that our guards are bigger,” Burton said. “Rebounding is a hustle stat. You’ve just got to want it. There’s only so many drills you can do to be a better rebounder, so it just comes down to grinding it out and going after it.”

Chasin said the young squad is prepared to meet its goal.

“We have a really good group of sophomores and juniors who have a lot of playing time under their belt, so being young really isn’t an excuse anymore,” Chasin said. “So winning the Empire 8’s would be awesome, and I think anything less would be a disappointment.”