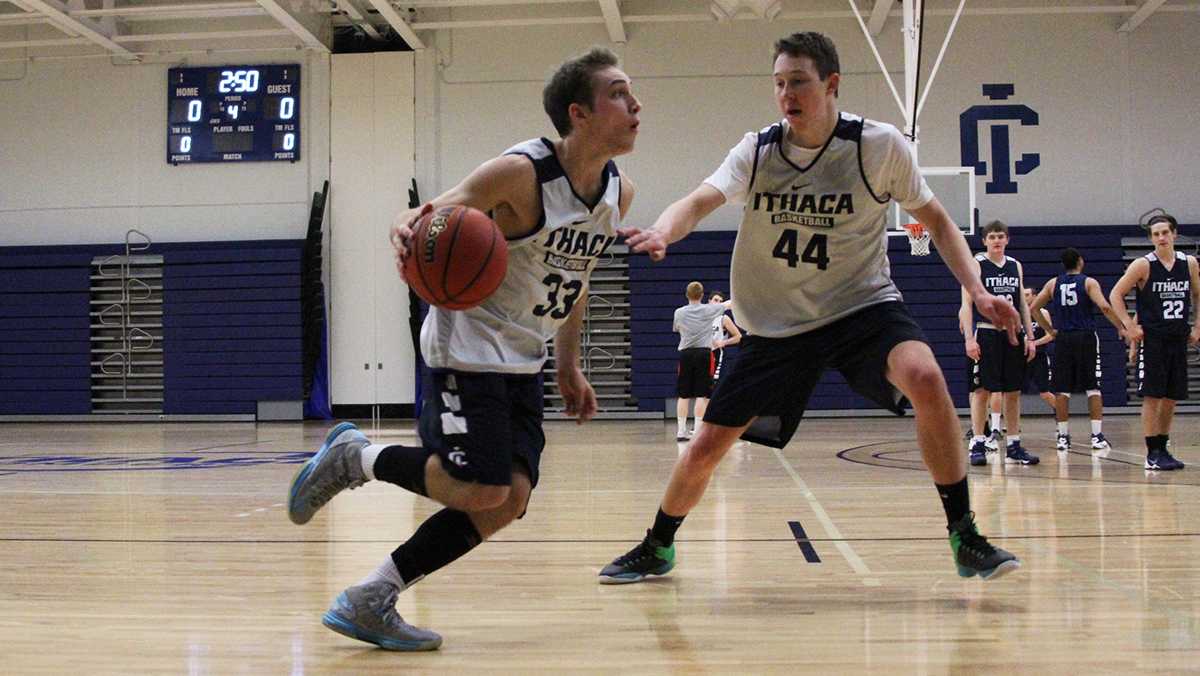 After an impressive 2014–15 season, the men’s basketball team returns with a young, talented squad that will be looking for new players to step up and fill the holes left behind by key players from last year.

Following a season in which they went 12–14 and lost in the first round of the Empire 8 Championship to St. John Fisher College, the Bombers come into their 2015–16 campaign as one of the youngest teams in their conference, with eight freshmen on their 16-man roster.

“The expectations are always high,” he said. “We’re young, but that’s no excuse, and I feel we have enough talent to make some noise in the Empire 8.”

For the 19th season in a row, the Bombers will be led by head coach Jim Mullins. At 274–207, Mullins is the second-winningest coach in the program’s history. Mullins said he is hopeful the underclassmen on the team will help the Bombers heading into the season.

“It’s no secret. We might be the youngest team in the country,” Mullins said. “One thing you can always control is how hard you play, and that will carry some opportunities to succeed.”

In addition to the underclassmen on the team, the Bombers return eight players to the roster who were a part of last season’s run to the Empire 8 Tournament. Mullins said the mix of seasoned veterans and young, blossoming talent gives him a reason to believe they will electrify Ben Light Gymnasium this year.

“Sam Bevan, Marc Chasin and Carroll Rich are three returning starters you have to look out for. Obviously we’re going to have to get something from some of the younger guys,” Mullins said. “At times they’ve all looked very good, and then there are days where their mind is just somewhere else. But the sooner we can get consistency, the sooner we can identify a rotation.”

The number of underclassmen on this year’s team is partially due to some key losses from last season’s lineup. Two of the losses from the starting lineup were senior captains Keefe Gitto ’15 and Max Masucci ’15. The duo combined for 679 of the 2,046 points the Bombers scored during the season.

Along with Masucci and Gitto, the Bombers also lost two key juniors in Joe Masino and Ahmad Boyd. Masino, who started nine games last season for the Blue and Gold, is not playing due to internship conflicts. Boyd, who gave the Bombers some points off the bench consistently throughout last season, quit the team.

Despite the turnover, Chasin said it should not hinder the results of this season.

“We are a deep team,” he said. “We just have to be confident and know we’re going to be all right despite the losses.”

The loss of Gitto is significant as the Bombers are now in need of a new starting center. The problem with replacing the 6-foot-8 Gitto is the lack of size the team now faces. There is not a player currently on the men’s basketball roster that is over the height of 6 feet 5 inches. Comparatively, Empire 8 rival St. John Fisher has three players that are taller than the Bombers’ tallest players. Freshman forwards Luke Cooper, Adam Kleckner and Peter Ezema all assist the team in terms of height.

However, senior guard Bevan said he does not see this necessarily as a negative for the Bombers as it gives the freshmen a chance to step up.

“The three big guys are all going to have to play this year,” he said. “They’re moving along nicely, and they all have good individual skills. They’re good shooters and good defenders.”

The Empire 8 portion of the schedule is shaping up to be a difficult road ahead as well. The Blue and Gold will face off twice against their conference foes, including last year’s Empire 8 champions, St. John Fisher. The Cardinals finished 25–5 last season and were ranked 22nd nationally in the final d3hoops.com poll.

Other Empire 8 matchups include Alfred University on Jan. 9, 2016, and Feb. 13, 2016, with whom the Bombers split their season series last year.

With all the roster changes, a tough schedule and the younger team, Bevan said, as the only senior on this year’s squad, he wants to win one more Empire 8 championship before he graduates, for no other reason than wanting his teammates to know how it feels.

“I honestly don’t care at all about individual play,” he said. “I have one more season left, and all that matters to me is to win another Empire 8 championship. That’s the best thing I’ve done with my career, and I want another one.”