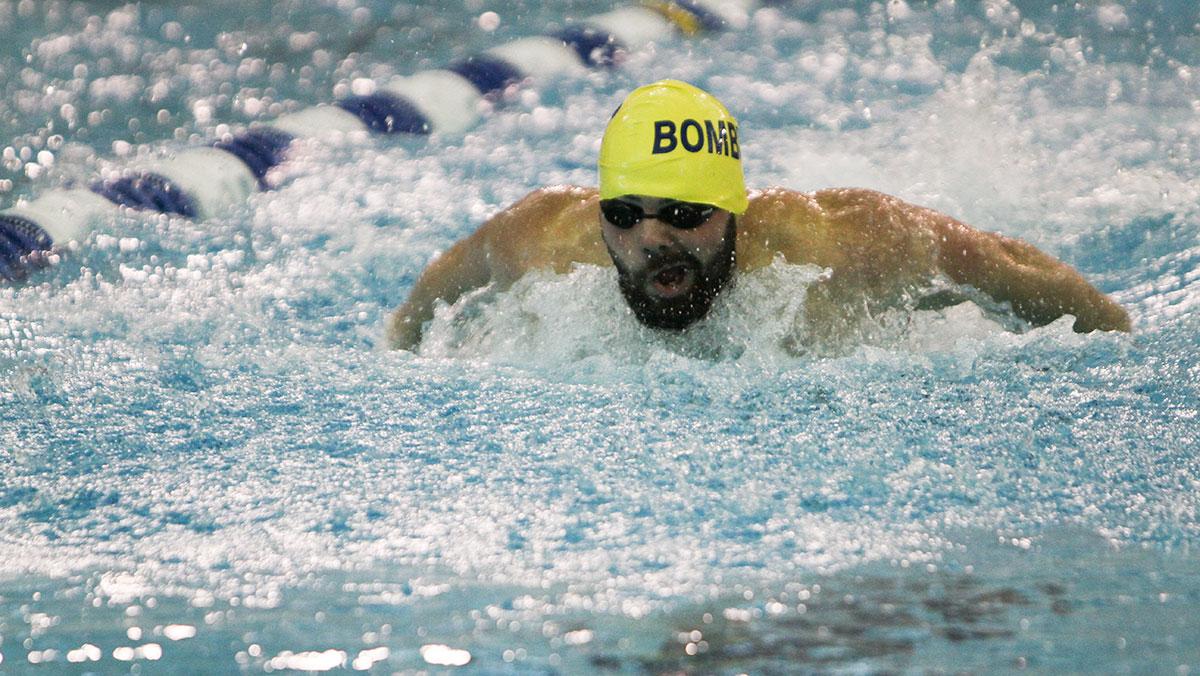 There has been an abundance of dynamic brotherly duos in the history of sports.

In the NFL, the Manning brothers have shredded countless defenses with their cannons for arms. The NBA features the tandem of Pau and Marc Gasol, who have terrorized opposing teams with stingy post games. In baseball, the Upton siblings have given opposing pitchers fits with their raw speed and power.

Then there is the Ithaca College men’s swimming and diving team, which features Adam and Lucas Zelehowsky, who have been instrumental to the squad’s perfect 8–0 record thus far this season.

Adam, a junior, has swam for the Bombers all of his three years at the college while Lucas, a senior, is currently swimming in just his second season on the team after transferring from the University of Louisville.

Both brothers have stamped their names into the school’s record book during their careers at the college.

As for this season, the Zelehowsky brothers have continued their success in the water, finishing in the top-three, including at least one first-place finish each in all eight meets this year.

Adam said he feels a competitive, yet nurturing nature with his brother fuels their victories in the pool.

“We definitely feed off each other,” he said. “If one person does well, then the other person usually does well. We tend to push each other positively.”

While both have experienced success as Bomber swimmers, Adam and Lucas appear very different in a number of ways. Head coach Kevin Markwardt said Adam is taller, more slender and is more free-spirited than Lucas, who is short, stocky and tends to be more focused.

However, Markwardt said the siblings’ contrasting makeups complement each other and have resulted in the multitude of achievements that each has received.

“They reinforce the goals for each other of what they are trying to accomplish on the team,” he said. “I think Lucas is more willing to confront Adam on things he doesn’t want to hear because he’s his brother.”

Following their different personalities, the paths Adam and Lucas took that led them to the college were also quite different.

Lucas originally chose to swim at Division I Western Kentucky University, but said he ultimately transferred following his sophomore year because of a growing rift that distanced him from his coach.

“Me and my coach got into a tiff [about] how he handled the team dynamic,” he said. “It was the first time in my life I didn’t enjoy swimming at all.”

Lucas then moved on to the University of Louisville where he said he decided to hang up the goggles and swim cap for good.

Lucas said it wasn’t until he heard Adam say he was thoroughly enjoying the swimming program at Ithaca College that Lucas decided to transfer to the college for the last two years of his eligibility and swim alongside his brother.

Since joining the Bombers, Lucas said he has thrived under Markwardt’s system and has gained respect from his fellow swimmers. Lucas was selected as a team captain by his teammates entering his senior season.

Like Lucas, Adam’s journey at the college and on the swimming team has been a rollercoaster.

During one of the team’s practices this season, Adam experienced tachycardia — a condition in which the heart beats too quickly — and was rushed to the hospital.

“It’s been an issue that he’s had for years,” Markwardt said. “They’ve been doing tests on him and he’s been cleared to swim, but it’s scary.”

Markwardt said he has been very cautious when it comes to Adam during practices, but still tries to push him as much as he can.

Despite their physical and mental differences, the similarities in Adam and Lucas’ approaches to the sport of swimming have been vital to the team’s triumphs this season.

“We have the same goals,” Lucas said. “We always put the team first before anything, before ourselves, before school. It’s always team first.”