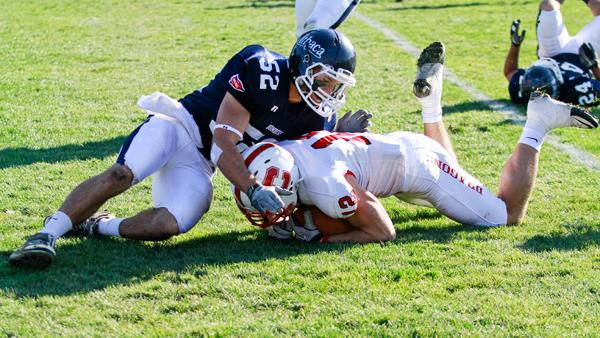 The Red Dragons come into the game on a seven-game winning streak. After a loss to Buffalo State in week one, they have steadily improved, becoming an offensive power. Cortland averages 446 yards of total offense, which come through a balanced attack of runs and passes. Three running backs have had more than 70 carries, with senior running back Dorian Myles leading the team with 711 rushing yards. Junior kick returner Justin Autera is fully fit after a nagging high ankle strain and will see a solid amount of touches both on offense and on kick return. If there is a weakness with this offense it would be at quarterback, where senior Chris Rose is decent but not great. Rose has 18 passing touchdowns and 15 interceptions on the season. Rose is not an extraordinary talent, but he will spread the ball around, and he is efficient, completing just more than 60% of his passes.

Bombers fans had cause for concern last Saturday when junior quarterback Phil Neumann was sidelined with an apparent shoulder injury. While sophomore Tom Dempsey was OK in his stead, it never really seemed that Neumann would miss this Saturday’s game. Neumann practiced Wednesday in full pads and looked good, showing little signs of pain. Saturday’s game serves as a chance for Neumann to cap off a solid first full season as starter. Neumann has thrown for more than 1,500 yards with 15 touchdowns and only seven interceptions.

Interim Head Coach Mark McDonough did confirm that the Bombers will accept an ECAC bid if it comes. While the list of teams declared for an ECAC bowl is lengthy, including Empire 8 teams Buffalo State, Alfred University, Utica College, St. John Fisher College and Hartwick College, a win against Cortland would give the Bombers an impressive resume. That resume would include wins against Cortland and Salisbury University, both automatic qualifiers from their conferences, as well as wins against Utica and Union College, both teams that may finish second in their respective conferences. The losses to Buffalo State, Alfred and Fisher may have the Bombers on the outside looking in.

The Bombers have already declared that they will not host the game because of the poor field conditions at Butterfield Stadium.

While Salisbury has wrapped up the Empire 8’s automatic qualifier, the actual Empire 8 title remains up for grabs. If two or more teams finished tied atop the conference, they all get acknowledged as champions by the conference. Utica and Alfred both have a shot at possibly grabbing a share of the title. The Pioneers will host St. John Fisher, while the Saxons will travel to Hartwick. However, for either team to have a shot, they will need Salisbury to lose the annual Regents Cup, held between the Sea Gulls and Frostburg State. With the Bobcats safely in seventh place, a Sea Gull loss doesn’t look likely. That, however, doesn’t take all the incentive away from Utica and Alfred. A Pioneer win would clinch a surprising second place finish for Utica and also relegate Fisher to their worst season in a decade. A Saxon win clinches a finish of no worse than third, while a loss leaves an embarrassing blemish on their postseason resume.