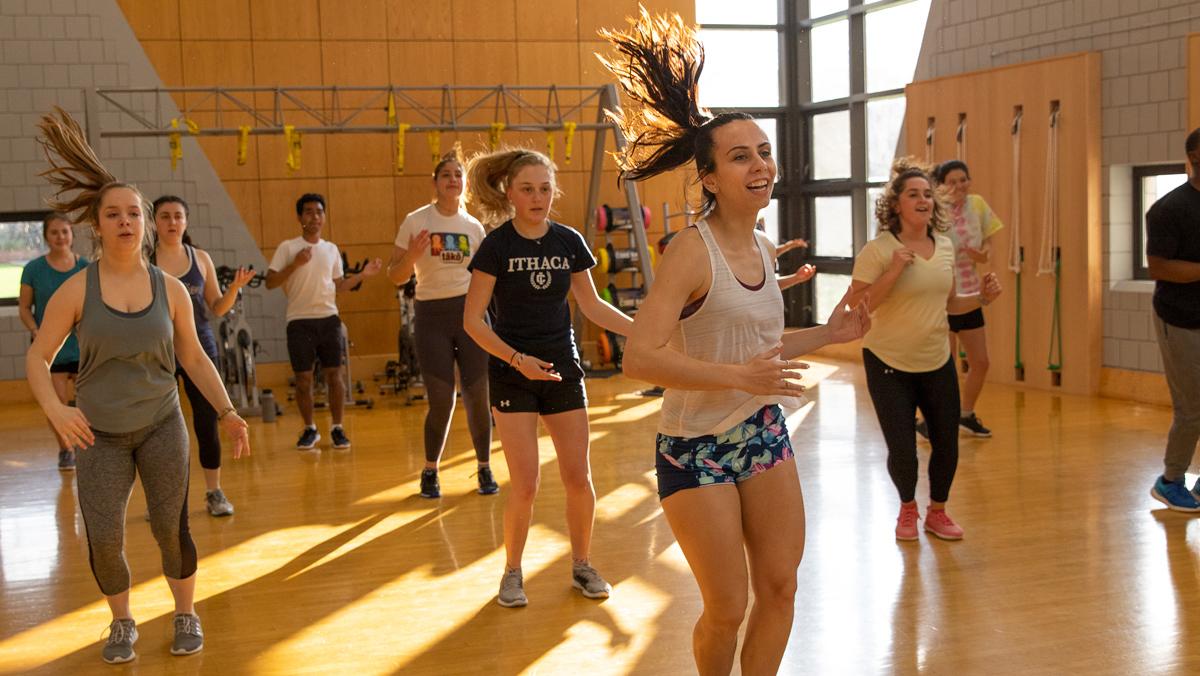 In the Fitness Center Aerobics Room on Nov. 11, Ithaca College students follow senior Zumba instructor Natalie Dispoto’s movements as she leads them through dance combinations at a quick pace, warming them up on a cold, gloomy Ithaca day.

“Let’s have some fun because Mondays suck,” she said.

Group fitness classes are free to students at the college, and students can register online for any class. The class instructor has free rein over the music and choreography they do in every class.

“I have a rotating 30-song playlist, so every time it’s kind of building on each other,” Dispoto said. “I have a set playlist that I use, and then I add to it and take away from it.”

Dispoto said that her classes typically have between 20 and 30 students and that she enjoys teaching because it is an enjoyable way to exercise. She began instructing Zumba during her senior year of high school and has been doing so ever since. She said she does her own choreography for class and also takes inspiration from YouTube.

At the beginning of class, Dispoto kills the lights and turns on a multicolor ball that throws red, green and blue lights around the room. She turns up the remixed music and starts moving as the entire room reverberates. The group of approximately 20 students follows her lead as she combines quick steps with circling hand motions.

As Dispoto is demonstrating the movements, individuals in the class give every movement their own styles, making them appear uniform yet unique. The song switches to a slightly slower tune, and the quick footwork becomes a calmer plié movement.

In the center of the room, freshman Sinclair DuMont follows the movements in sync to the beat. DuMont said that she participated in Zumba classes over the summer.

Like all group fitness classes offered at the college, Zumba is open to anyone interested, but the majority of participants are women. DuMont said the gym feels like a very masculine and male-dominated environment. She said she likes Zumba because it allows her to enjoy movement and exercise with other people in a comfortable space.

After the first few songs, several participants grab water and take a quick breather before jumping back on the beat. Dispoto dances her way in between other students and yells out motivation as the beat drops again.

Sophomore Mackenzie Milo said that she was a dancer in high school. She said she enjoys Zumba because it is similar to dance.

“It’s kind of nice to keep that going here,” Milo said. “I looked at the website and saw they had Zumba classes, and I’ve always been interested in trying it, so I did.”

The fourth song results in a wide stance with arm movements on either side of the body, as if the participants are alternately dribbling basketballs in front of and behind them.

Almost everyone in the room is singing along to the music, and those who are not appear deeply focused on the moves. After another brief water break, Dispoto begins jumping lightly and quickly from one foot onto the other, pausing at every four-count and leaning forward, arms outstretched as they reach from right to left and circle around.

Approximately halfway through the class, Dispoto has everyone split into two sides of the room for the next number. She stands in the middle of the room and demonstrates choreography so both sides are mirroring each other. Every beat of the music has its own clear movement followed by quick footwork. As the music repeats, so do the designated movements.

The room has a mirror along one wall, so the group members can watch everyone else while facing forward. The energy in the room only builds as the class continues, and participants become more and more in sync.

“We have a hard one to end with,” Dispoto said as the music picked up. “Get ready.”

She goes into a wide squat position and clasps her hands in front of her chest. The class members follow as they all pulse slowly before rocking side to side. The group maintains the excitement and high-energy atmosphere until the slower cooldown song comes on. The entire class sinks to the floor in a stretch to end the workout.

Red-faced and slightly breathless, participants exit the room and put their boots and coats back on before heading back to their obligations.