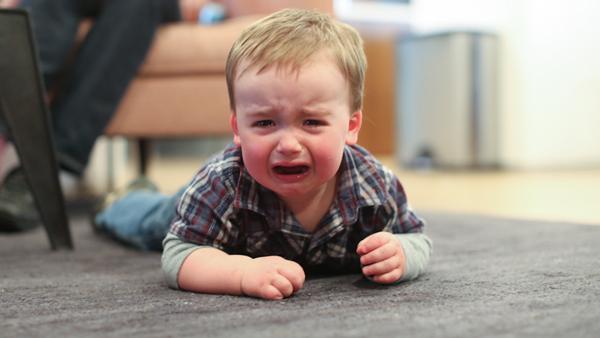 Courtesy of Humans of New York
Charlie Pembroke is featured as the subject of the Tumblr blog “Reasons Why My Son is Crying.” Greg Pembroke ’02, the founder, creates captions such as, “I read him his favorite bed time story.”
By Josh Greenfield — Staff Writer
Published: April 24, 2013

Earlier this April, Greg Pembroke ’02 featured his 22-month-old son, Charlie, on the Internet by creating the Tumblr page “Reasons My Son Is Crying,” a blog where he shared pictures of Charlie crying accompanied by deadpan explanations. Since its creation, the blog has exploded, and Pembroke has been handling his newfound success while still focusing on being a parent.

Staff Writer Josh Greenfield had a chance to speak with Pembroke about his success, his family and the future of the blog.

Josh Greenfield: What made you first decide to create this blog?

Greg Pembroke: Well, a few weeks ago, I started posting a couple pictures on Facebook. Actually, the first picture that I ever took with this intention was the one where there is broken cheese involved. We were at a museum — I suggested that he share his cheese with his brother, and he said it was fine. So when I broke the cheese in half, he just lost his mind, and I thought it was so absurd and so funny that I had to take a picture, and I uploaded it to my friend and I called it “Reasons my son is crying.” And my friend just loved it, and I just kept doing it from there. At some point, someone suggested that I start a Tumblr page, so I did, and it completely exploded from there.

JG: How long did it take for the blog to become popular?

GP: Well in less than a week I was on “Good Morning America.” I had the blog for a few days, with maybe 15-20 pictures on it, when somebody put it on Reddit. It got to be number one on Reddit on a Sunday night, and on Monday it was picked up by … it seemed like almost every website: Gawker, Buzzfeed and so many others. Then from there, the TV people started calling. We had “Good Morning America” and “The Today Show” calling. I don’t know how they hunted us down, wanting us to come on the show the next day.

JG: What were people’s original responses to the blog?

JG: Do you plan on telling your son about this when he gets older or just waiting for him to find it?

GP: I think I’m gonna have to mention it to him at some point saying, “Hey, by the way, every time you Google your name there is gonna be a picture of you crying when you were 3.”

JG: Do you have any plans for the blog for the future?

GP: I don’t know, the whole thing was totally by accident. I have gotten so many cool emails from around the world, parents saying, “I thought I was the only one.” Because parents tend to share only the positive things about parenting, if you ask every parent on the planet, their child is the smartest, happiest or most handsome. I think that the fact that I decided to share some of the other aspects that are just as real, I think people are really gravitating towards that. So as far as plans for the future, I don’t really have any. I am thinking about opening it up for submissions from people around the world. People are already sending me hilarious pictures with amazing reasons for why their kids are crying, so I think that would really just be the natural progression, to make it less about my kids and more about kids in general. From the Netherlands to China, everything is the same with kids this age, and that’s what I think is an amazing message — everyone gets caught up with how different each culture is, but the culture of toddlers is absolutely universal.