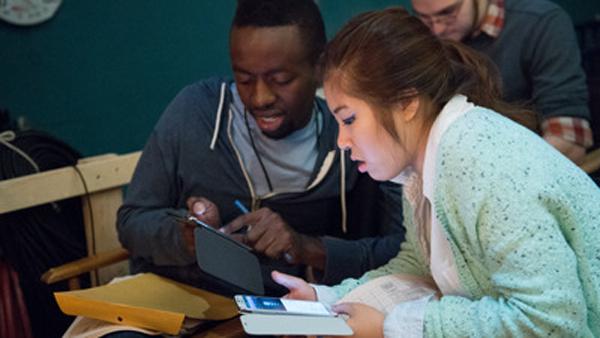 Having grown up in a home with little access to cartoons, Tatenda Mbudzi ’10 has begun to fulfill his dream of being in the film industry. After winning a video contest, Mbudzi was given the chance to stand on the stage of the 85th Academy Awards on Feb. 24 at the Dolby Theatre in Los Angeles and hand trophies to the celebrity presenters.

Currently enrolled in the UCLA School of Theater, Film and Television’s Producer’s Program, Mbudzi won the Academy of Motion Picture Arts and Sciences and MTVu’s inaugural Oscar Experience College Search, along with five others in the nation. He had to submit a video application answering the question, “How will you contribute to the future of movies?” Once he found out he won, he had the opportunity to be a part of the award show, as well as get an inside view of Hollywood.

Staff Writer Emma Rizzo talked to Mbudzi about the honor, the impact of this experience and his plans for the future.

Emma Rizzo: Would you be able to talk a little bit about your background?

Tatenda Mbudzi: I’m from Zimbabwe. I lived in London from ages 2 to 5. I moved back to Zimbabwe where I did all my schooling. I fell in love with storytelling at a very young age. I loved stage. I did a lot of theater and public speaking in high school. I applied to Ithaca College, and I got in. At Ithaca, I did television-radio with a minor in integrated marketing, and I did the LA  program.

ER: What did you talk about in your application video?

TM: I talked about the feeling of being an outsider, having come from another country. I want to make people feel like they belong to something and help them believe in themselves. When you walk into a situation, you have to adapt. Sometimes it goes well, sometimes it doesn’t, but at the end of the day, you grow and you learn. Basically, I want to tell stories like that, so I put that in a comedic package.

ER: What was your reaction when you found out you won?

TM: They said they were going to do a Skype interview. On the Skype call, they asked me some questions, and then they asked me, “How would you feel if we asked you to come to the Oscars?” I was like, “I would feel awesome.” Then they said, “Yes! We want you to come to the Oscars.” I said, “I’m sorry, will you repeat that?” And that went on for about 10 minutes. I wanted to jump up and down, but I had to be in frame. I was really excited.

ER: What was going through your head the first time you stepped on stage at the Oscars?

TM: My first thought was, “Wow, there are a lot of people here.” I didn’t try to look out for anyone that I liked, because I would get distracted. I was pretty focused. I think I was probably smiling uncontrollably. I was just so excited, because there were so many people. It just looked so beautiful.

ER: How has this experience impacted you?

TM: It has definitely helped me to think bigger and just know that if you work hard enough, nothing is impossible. I don’t know what I would be doing if I wasn’t doing storytelling. This has made me more committed. It’s just a really wonderful reaffirmation of faith in what I am meant to do. It was really good for my family to see as well, and they have been very supportive. They’ve encouraged me to strive for the best. It’s life changing for sure.

ER: What are your plans for the future?

TM: I graduate from UCLA in June. I’m looking at my options in terms of what I want to do. I know I want to be a part of making films. I think there is a type of story that can be told that bridges cultural gaps. I think there are a lot of interesting stories to be told. It would be cool to work in that area. I’m studying producing, so I’m definitely interested in finding stories and working with different people to try and get them made. I’m just going to keep trying to make things.

Check out Mbudzi’s application video below: