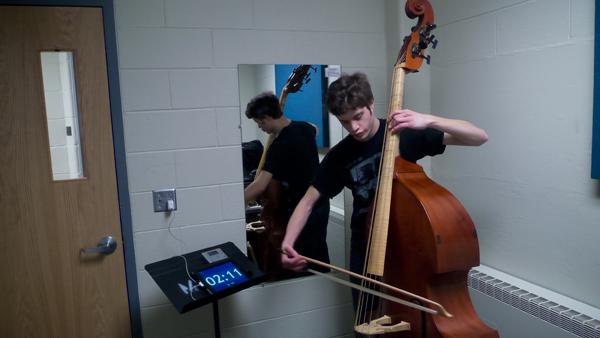 Tucker Mitchell/The Ithacan
Junior John DiCarlo practices March 19 in room 1315 of the Whalen Center for Music. DiCarlo is a double bass performance major and said he uses his emotions to help him connect with his music and audience.
By Emma Rizzo — Staff Writer
Published: March 20, 2013

Junior John DiCarlo first plucked the heavy strings of the bass in middle school, immersing himself in the instrument that would turn into his career. A double bass performance major, DiCarlo became serious about the instrument during his junior year of high school and is now developing as a musician in the Ithaca College James J. Whalen School of Music. DiCarlo, described by his peers as a driven musician and natural leader, will be performing a solo recital on Saturday.

After deciding he wanted to pursue music, and primarily focusing on jazz during high school, his grandmother influenced him to choose classical.

“She made me realize that I really wanted to do the classical music thing,” DiCarlo said.

He currently plays in the college’s Symphony Orchestra, has played in the pit orchestra for the operas put on by the music and theater departments. Jeffery Meyer, the director of orchestras, said because DiCarlo holds such a high position in the orchestra, he is considered a leader by his classmates.

“John presently holds the principal bass seat of the Ithaca College Symphony Orchestra, which requires not only masterful playing on an individual level but also inspiring and disciplined leadership among his peers,” Meyer said.

When performing, DiCarlo said he thinks analytically and takes the role of the bass seriously.

“It’s a lot of that technical way of using your ears to keep the ensemble together,” DiCarlo said.

DiCarlo also said he recognizes the emotional factor involved in playing an instrument.

“When you are physically playing an instrument that is not you, you have to connect the instrument to yourself,” DiCarlo said. “It’s a really hard thing to connect. That’s one of my weaknesses as a performer.”

DiCarlo aids this connection by tying the emotional connotation of the music to a real-life event. He said he has channeled the emotions from the death of his uncle to create genuine emotion in his performance.

“It’s hard for me to evoke real emotion without having something to connect it to, so I feel his presence and what he meant to me,” DiCarlo said. “I try to evoke him through some of the things that I play.”

Sophomore Andrew Ryan, also a double bass performance major, plays in a studio with DiCarlo. Ryan characterizes DiCarlo as having serious dedication and a strong work ethic, adding that DiCarlo is specific about the way he wants his pieces to sound.

“He is definitely very involved in everything he is playing,” Ryan said.

“He’s great to work with,” Ryan said. “He always has fun when he plays.”

After graduating from the college, DiCarlo plans to attend grad school and eventually pursue double bass performance as a career and is also interested in teaching music. He is specifically interested in studying the Viennese bass, which was the bass used in the 1700s when Mozart was composing.

“I really like historical performance,” DiCarlo said. “It’s playing on instruments that would have been used in a certain time period.”

DiCarlo said he is motivated to reach his goals by listening to recordings of other musicians and is inspired by his father, a pipefitter, to push himself to his full potential. He said he wants to have the same level of work ethic as his father, who built his family’s house.

“I aspire to be half the man he is,” DiCarlo said. “I think he’s amazing.”

DiCarlo works at this aspiration by fully committing to his music and creating an experience for his audiences.

“You should always let your guard down,” DiCarlo said. “It’s always about who you are playing for.”

For DiCarlo, music is a means of expression, and he wants to connect with people through his performances. He said the meaning of music comes from the people who are listening.

“When I am playing music, it is a way for me to express myself and show people what I really love and care about,” DiCarlo said. “I want them to feel what I feel.”