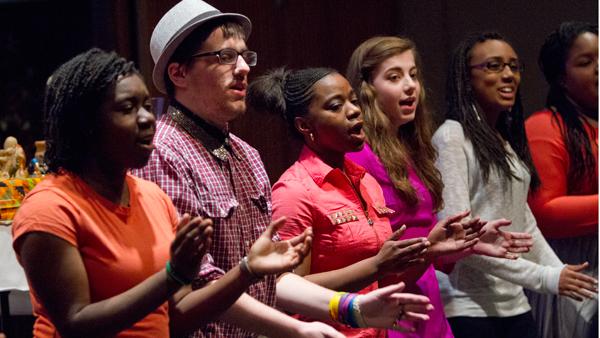 Every year, people from around the country travel to Ithaca to hear inspirational gospel music at the annual Festival of Black Gospel. This year, the festival committee is expecting to bring people together from Ithaca and all over the East Coast.

From Friday to Sunday, Cornell University and Ithaca College will be hosting the FBG, an event showcasing gospel performances by students as well as local and national acts to spread the culture of black gospel music to people of all backgrounds.

The festival was founded in 1977 by Ithaca pastor the Rev. Samuel Perry and former Cornell University United Religious Works Director the Rev. Jack Lewis as a response to widespread racial tension on Cornell’s campus and across the U.S. The event was intended to bring together people of different races, and when the college officially became part of the festival in 2007, it also became a way to unite the two schools.

John Rawlins, assistant director of the Office of Student Engagement and Multicultural Affairs and the FBG’s adviser, said in recent years what has made the FBG special is its ability to bring people together from not only the two colleges but from outside Ithaca as well. He said this focuses the festival’s theme on unity and togetherness.

“You’ll see gospel concerts at other colleges and universities,” Rawlins said. “You rarely will see a festival of this magnitude being put on by a number of institutions with the community in mind.”

In addition to performances by local groups like the Amani Gospel Singers, there will be headline shows from gospel artists Anita Wilson and Jonathan McReynolds.

The event will kick off Friday at Cornell’s Appel Commons with the Opening Night Cafe featuring McReynolds and the Amani Gospel Singers. Several acts from outside Ithaca will follow, including a staged reading of the original musical “Broken Chains” and a series of workshops, one of which will be a vocal master class hosted at the college.

Sophomore Alyssa Olivieri, president of Amani Gospel Singers, said she has seen many different kinds of people at last year’s festival, so this year’s festival should be just as diverse.

“Even though it’s called Festival of Black Gospel … you see white, old people from Ithaca itself,” Olivieri said. “So it’s all colors, all majors, all ages. People come together, and they’re there for different purposes, but at the end of the day, you want to come together as a group and sing and enjoy, so I think that’s pretty cool.”

FBG volunteer coordinator Oluwayeni Ropo-Tusin said one of the most important aspects of the event is its religious component. Ropo-Tusin said what makes the FBG meaningful to her is the combination of beautiful music and religious expression.

“You come there, you enjoy the music, but you get something else,” Ropo-Tusin said. “The basis of gospel music is people writing songs about their relationship with God.”

Ropo-Tusin also said though people may not be particularly interested in gospel because they feel it’s too religious, they’ll still have a good time experiencing the religion with the performers.

“The festival is a huge opportunity for people to get exposed to gospel music,” Ropo-Tusin said. “It’s about the beauty of music, the art, the incredible talents that people bring to the table.”

The festival’s main event is “All of the Lights,” which will take place at 7 p.m. Saturday at the State Theatre and will include a performance by Wilson. On Sunday, the festival will end with a closing service featuring special guest pastor Justin Bilson.

For the team behind the festival, planning and executing this event has been an enormous undertaking, FBG student chair senior DeAnne Stewart, said.

“As soon as the festival happens, we start planning for the next festival,” Stewart said.

Stewart and her team began by brainstorming ideas for the festival weekend as a whole. Then they looked critically at last year’s festival, evaluating what had worked and what had not, and looking for ways to improve the next festival.

“Then, once we start to get everything narrowed down, it’s just a matter of getting everyone together to pinpoint what needs to be done first to actually make it happen and then adding on the things that are just going to make it better,” Stewart said.

As cochair, it is Stewart’s responsibility to oversee every aspect of preparation for this year’s festival. Stewart has been involved with the festival since her junior year, simply attending meetings at first and then gradually becoming an integral part of the proceedings. Stewart said she has high hopes for this year’s event.

“I hope that this is our biggest festival yet and that people are uplifted by it,” Stewart said.