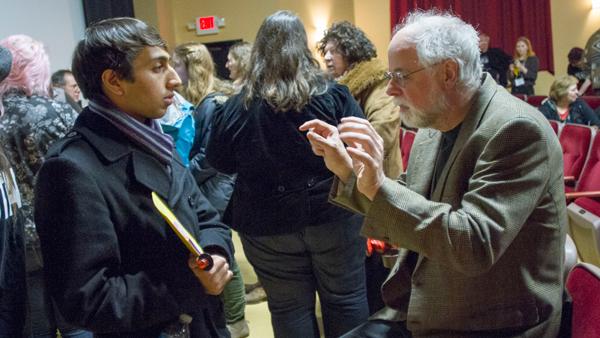 Shawn Steiner/The Ithacan
From left, junior Gautam Singhani, an intern for FLEFF, stands with Vincent Grenier, a professor of film from SUNY-Binghamton, on March 3 at Cinemapolis. This is FLEFF’s 16th anniversary.
By Elizabeth Morris — Contributing Writer
Published: March 27, 2013

Film workshops, screenings and lectures revolving around the theme of mobility will help mark the 16th year of the Finger Lakes Environmental Film Festival at Ithaca College and Cinemapolis.

The festival’s theme of mobilities encompasses the movement and immobilities of people, ideas, objects and environments. FLEFF will take place from April 1 to April 7 with more than 100 events and screenings. Cinemapolis begins film screenings on April 4 and will show films two to three times.

The theme of mobilities is deeply explored throughout the festival, Patricia Zimmermann, professor in the department of media arts, sciences and studies and co-director of FLEFF, said.

“We’re picking film, new media art, music and performance that explores this theme in all of its dimensions, from the movement of commodities to physical movement, to movement that is prevented, to movement that is enhanced across a variety of disciplines, because FLEFF is international and interdisciplinary,” Zimmerman said.

The first film screening at Cinemapolis is “Amazon Gold,” which will be followed by a discussion with producer Sarah duPont. “Amazon Gold” follows the issue of destruction in the Amazon rainforest as a result of illegally mined gold. DuPont said after a long discussion, she and her colleagues decided the best way to educate people on the problem is to show them through a film. On April 2, she will also be giving a workshop about the issues in the Amazon.

DuPont said when she comes to the festival, she will be eager to talk with students.

“One of my goals is to talk to the students and learn from them and hear what they have to say about how to move forward,” duPont said. “I want to pass on all the information and wisdom that I have learned in my life and empower others.”

FLEFF was originally launched through Cornell University in 1997, but in 2005 Ithaca College became the permanent host of the festival. Around the same time, the scope of the festival expanded from its narrow focus on the environment, Tanya Saunders, assistant provost for international studies and special projects and an executive producer of FLEFF, said.

Some of the students that guests interact with are FLEFF interns, students at the college. Sophomore Dorothea Hinman, a blogger intern at FLEFF, said her primary job is to talk with the different guests and then post on FLEFF Intern Voices, the festival’s blog.

“We’re assigned three or four different artists, so filmmakers or multimedia workers, to interview, and then we have to go to the events that they present at and make connections and build the FLEFF community,” Hinman said.

In addition to the film screenings, lectures and workshops, there will also be musical events. “Carmina Burana,” a cantata performed at the beginning of the festival, is one of the most anticipated events in the music school, Tom Shevory, professor of politics at the college and co-director of FLEFF, said. The performance includes pianists Jairo Geronymo and Deborah Martin.

“We’ve done things like that before, but I think this will be one of the most spectacular versions of the music school collaborations that we have,” Shevory said.

Other events during FLEFF this year will cover issues such as hydraulic fracturing, child soldiers, cross-breeding in Icelandic horses and animal testing.

After certain events, there will be a discussion between audience members and producers, distributors and directors. These discussions are facilitated by a moderator, usually a faculty member from the college, Cornell or one of the colleges in the surrounding area, Zimmermann said.

Zimmermann said the goal of discussion between the audience members and guests remains prominent.

“We hope that the festival creates a different environment on campus, one where whether you’re a student or a well-known filmmaker, or a well-known intellectual, you’re all there gathered together to explore ideas that matter and that are unresolved and unformed, yet urgent in the world,” Zimmermann said.