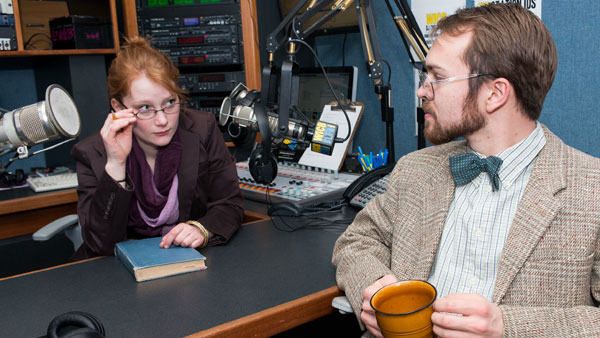 People misplace things all the time. Sometimes they find the item shortly after noticing their disappearance, but some objects just vanish into thin air, missing, never to be seen again.

“Gone Missing,” the Ithaca College Main Stage Theater’s current production directed by Wendy Dann, assistant professor in the theater arts department, is a quirky, documentary-style musical composed of man-on-the-street interviews with average New Yorkers, all of whom have experienced some sort of loss in their lives. Written by Steven Cosson, with the help of The Civilians, the New York City–based investigative theater company that conducted the interviews included in the play, the show demands versatility from the cast members, who each deliver their multiple roles well. But with no concrete storyline to follow, this mosaic of interviews falls a bit flat.

Eight Ithaca College students portray an array of civilians, each with different accents and backgrounds, emphasizing the assorted range of people found in the Big Apple. In this production, the accents are, for the most part, depicted well enough for an audience member to tell where each character is from. With a thick Brooklyn accent, senior Stephen Humes hits the role of a New York City Police Department officer out of the park, providing the play with refreshing bits of comic relief. In one scene late in the show, he demonstrates his rather impressive versatility by portraying two opposite roles, the police officer and a young delinquent he is threatening to arrest, in the same exact scene.

Additionally, freshman Lily Waldron and junior Nathaniel Fishburn portray the roles of Teri, a radio talk show host, and Dr. Palinurus, a supposed expert on loss, respectively. Waldron has an attractive, sultry voice that demands attention, making it ideal for radio, while Fishburn comes off as a dorky professor trying to be hip. However, the duo work well together and slide in a few jokes that make audience members chuckle, despite the fact that they are discussing the serious impact that loss can have on an individual. These segments tie the array of stories together while providing an interlude for the show’s catchy musical numbers.

The diverse chorus of voices and the dance sequences are by far the highlights of this production. From the beginning of the show, the band, conducted by musical director Joel Gelpe, and the company come in strong with the opening number, “Gone Missing.” Senior Kathryn Allison brings the perfect amount of sass in addition to her powerhouse vocals in the solo number “The Only Thing Missing,” during which she sings to her lost love. Another crowd favorite is “La Bodega,” a saucy Spanish number sung by sophomore Josh Rivera and the rest of the company, which immediately follows Allison’s number. A few other musical numbers have their high points, but as the play progresses, its overall quality is weighed down by the lack of a compelling central storyline.

This past fall, the Ithaca College Main Stage Theater produced Anna Deavere Smith’s “Fires in the Mirror,” a straight play composed of a multitude of monologues. In a sense, “Gone Missing” and “Fires in the Mirror” are similar because both are mosaics of the tales of New York City citizens to articulate a common experience among them. However, all of the narratives in Smith’s show connect to create a cohesive plot, whereas “Gone Missing” doesn’t come full circle. The show’s theme of loss is clear. Everyone faces loss at some point in their lives, either physically losing something like a cellphone or emotionally losing a loved one. However, it would seem Cosson and The Civilians didn’t devote the same degree of care toward crafting a cohesive tale.

“Gone Missing” is a musical with a structure unlike that of the average theatrical production. It’s filled with talented actors who portray their individual roles well and attract audiences with their performances in the show’s quirky musical numbers. However, because of the production’s lack of a central storyline, the show tends to drag at times, ultimately causing it to take a downward spiral.