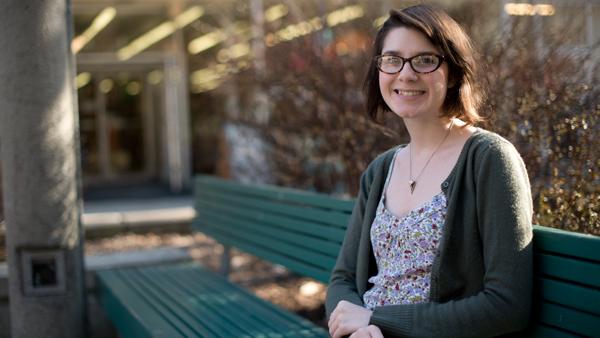 Rachel Woolf/The Ithacan
Senior Veronica Smith sits on a bench Wednesday on The Commons. She is an intern for the New Voices Literary Festival, coming to Ithaca from April 24 to April 26. Eight writers will attend.
By Alyssa Gilliam — Contributing Writer
Published: April 17, 2013

A “mommy blogger,” an author, a magazine editor and an Ithaca College professor, among others, will speak to students about their careers in writing as part of a new literary festival next week on campus.

From April 24 to April 26, the first New Voices Literary Festival will come to Ithaca. The festival will include a diverse group of visiting writers, including Nathaniel Rich, Rebecca Makkai, Tim Horvath, Robin Ekiss, Marie-Helene Bertino, Jane Roper and Sheba Karim, who students will be able to talk to during the three-day event.

With the atmosphere of a festival in mind, New Voices will be three intense days filled with activities, readings, classroom visits, panels and interaction between the students and the authors. The authors will be visiting certain writing and English classes for question-and-answer sessions and to offer advice for aspiring writers.

Chris Holmes, assistant professor of English, came up with the idea for New Voices and contacted Eleanor Henderson, assistant professor of writing and author of “Ten Thousand Saints,” which made The New York Times’ 10 Best Books of 2011 list. Holmes and Henderson said they wanted to bring younger authors to Ithaca who are more or less in the beginning stages of their careers so students could better relate to them.

Additionally, students can submit writing samples, and a panel of judges will select the winning piece as part of the writing department’s annual Writing Contest. The winner will get the chance to read an excerpt of his or her own work along with the eight authors in a special “micro-reading” at Buffalo Street Books. Henderson said a record-breaking 140 entries were submitted for the contest so far.

“It’s meant to increase student engagement and reward and honor the strong writing that’s coming out of our students,” Henderson said.

Henderson said the students will benefit from the event because they’re going to be able to interact with young emerging authors, poets and editors who have managed to create successful careers with their writing. Rich, is getting critical recognition for his novel, “Odds Against Tomorrow,” a thriller about New York City in the wake of a Category Five hurricane.

“[The authors] are fantastic writers,” Henderson said. “They’re just a fantastic group of really exciting, engaging, interesting people. Our students can really benefit from talking to writers who are working people and who might have a day job in addition to writing, to see real life examples of people forming a life around writing.”

Senior Veronica Smith is a current intern for the festival. Smith said when she received the email asking for student interns, she jumped at the chance to help bridge the gap between the English and writing departments.

“There’s this funny idea that really successful writers are all super eccentric and genius people who you can’t talk to, and there’s no way you can aspire to be them because you’re just a normal person who has to pay rent and eat food,” Smith said. “It’s nice to see that you can track the progression of how [the authors] could’ve been college students like me, and it makes sense.”

The festival itself began as little more than a pipe dream for Holmes. He said his initial fear was that the festival would not get enough funding from the college and students wouldn’t be interested in participating. Holmes said he is now relieved he gets to have a role in a festival that will bring so many new people to the college.

Holmes said he based the idea for New Voices on the movie “Wonder Boys” starring Tobey Maguire.

“The film features a college campus that has a really giant and famous literary festival,” Holmes said. “It’s incredibly fun and gets everyone excited about reading and thinking about books and different forms of writing.”

Though New Voices will have a few isolated events on campus, the festival is open to the public. Holmes and Henderson said they hope New Voices will get students excited about writing and that it will help connect aspiring students to emerging writers.

“I’d really like the campus to be as involved as it can be,” Holmes said. “It could become a really great tradition.”