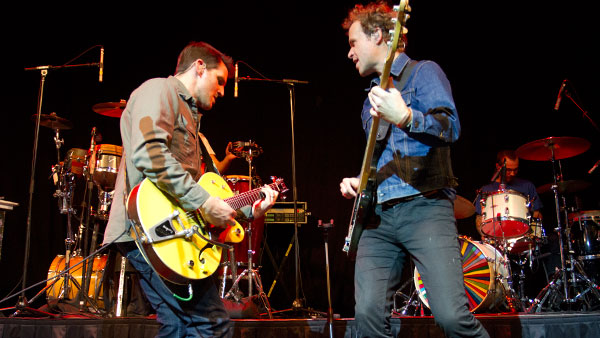 Immersed in a stream of blue and green lights, sweat dripping from his brow, Ryan Miller, lead singer and guitarist for Guster, took a quick breather Nov. 3 as he looked out into the screaming crowd.

“It’s a dream fulfilled playing here at Emerson Suites tonight,” Miller said, a coy smile spreading across his face. “How many bands have stopped here on their way to the top? At least one tonight, motherf——.”

Guster has become a figurehead to the American indie scene. The group, which began as a college alternative rock band, has evolved in 20 years, becoming a touring spectacle, infamous for its energetic and lively stage presence. The band meshes trumpets and pianos with aggressive hand drumming and a sense of humor.

Miller playfully interacted with his bandmates and the audience, frequently exchanging goofy glances and lackadaisically dancing across the stage, bringing out the band’s animated spirit.

Senior Lucas Knapp, the Ithaca College Bureau of Concerts co-president, said Guster drew in a crowd of nearly 450 students, which is reflective of the 1,200 students that voted in an online survey the BOC conducted in September to determine which band they wanted to see at Ithaca College. The group, Knapp said, appeals to college students for its longevity in the music industry.

“As an organization, our priority is to reflect the student population,” Knapp said. “Guster has been around for 20 years, and they have built up a mass appeal as an indie-rock band.”

Guster’s set followed a 45-minute warm up from local band Second Dam, which brought a respectable crowd of early comers, ranging from college students to middle-aged men, and ended its set with a dancing frenzy. Second Dam’s drummer, junior Andrew Weir, said the concert was not only the biggest crowd his band has played to, but Guster was also the best show he’s seen on campus.

“They were incredible,” he said. “They’ve been playing music together for so long … but they played like it was their first time playing. They still had that energy and passion.”

Kick-starting the 90-minute show was “The Captain” from 2006’s “Ganging Up on the Sun,” Guster’s fifth and most successful record to date, reaching No. 25 on the Billboard 200 album chart. The up-tempo tune paved the way for an energetic and fast-paced evening. Crowd-pleasers and old favorites, from the bass drum–heavy “Satellite” to “Manifest Destiny,” which features a brassy trumpet sample, filled up the majority of the set list, allowing concertgoers to get comfortable and in their groove.

Junior Emma Lazzari, who attended the concert after her friend, junior Emily Healy, convinced her to go, said the show was full of energy from both the band and audience.

“[The concert] was quick moving and at a good pace, just overall, really entertaining,” Lazzari said. “There was a good amount of head bobbing, swaying and tapping of the feet.”

The band continued to show off its high-energy stage presence with Miller’s seemingly endless head bobbing and the many entertaining faces of drummer Brian Rosenworcel as he flailed his arms around for a series of drum solos. Secondary guitarist and vocalist, Adam Gardner, played along, charging across the stage with unrelenting energy.

Even during the layovers between songs, the band did not lose its liveliness. Playful and filled with charisma on stage, Guster displayed a captivating camaraderie. Puttering through a 19-song set list, the group members would exchange instruments with one another, switching from guitar to keyboard. Occasionally, Gardner would play a new instrument the band hadn’t used yet, such as the tambourine or trumpet, on songs like “Manifest Destiny” and “What You Call Love.”

“One really cool thing I noticed is the variety of instruments each guy in the group was playing,” Thomas said. “They really know their stuff and their songs.”

The set list peaked toward the end of the night with an extended disco dance groove of the “Airport Song.” During a guitar build-up, the stage lights went from steady streams to wildly flashing at full blast to match the tumultuous waves of noises, reminiscent of the club funk that spiraled out of the dance clubs of the late ’70s. The band continued to build up a crescendo of noise, but when the music faded, all that could be heard was the waves of cheers from the excited audience.

Finally, Miller took to the microphone to mock the common encore tactics of bands.

“Thanks, everyone! This is the last song that’s in our set list before we go out and do an encore,” he said. “So, we’ll play this song and walk over there, and you will clap for 10 to 15 seconds, and we’ll come back up to play more.”

Senior Patrick Hayes said he enjoyed the way Miller communicated with the audience.

“The way Ryan Miller speaks to the audience was fantastic,” he said. “They put on such a high-energy concert that even if you aren’t a fan you can’t help but have fun.”

The band rounded out the set with “Happier” and “This Could All Be Yours,” and as promised, after a resounding wave of cheers, it returned for a three-song encore. “Demons” stood out in the encore trail, featuring heavy guitar strumming and shared vocals by Gardner and Miller as they belted out together: “’Cause it’s easier sometimes not to be sincere/ Somehow I make you believe/ When I speak I cross my fingers; will you know you’ve been deceived?”

Guster left concertgoers reeling from the passion it manifested during the performance. Lazzari said she enjoyed the show — even if it meant relinquishing a night of studying.

“I had a test the next day, and [the concert] definitely made me not do so well on it, but I think it was worth it,” she said. “I will remember going to the concert more than I ever will failing that test yesterday.”

Check out theithacan.org/34979 for an interview with Ryan Miller.