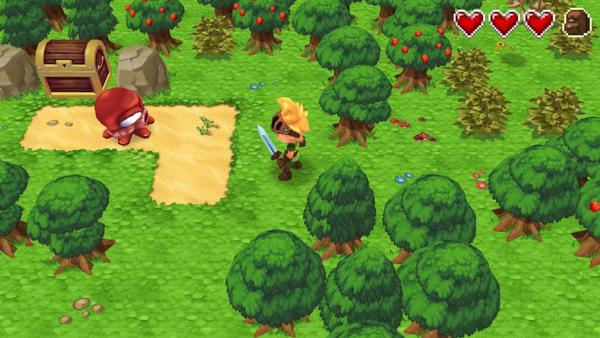 Courtesy of Shiro Games
Video game “Evoland” features the character Clink on his journey through the evolution of video games. During his travels, Clink encounters magical chests that give him special graphics and sound effects.
By Nathan Rafalowski — Staff Writer
Published: April 24, 2013

Many indie games hearken back to the good old days of gaming. Nostalgic graphics, melodies and gameplay are all part of the strategies used by indie groups to make their games stand out among the licensed crowd. “Minecraft” won the hearts of many with its simplistic graphics, while others games like “FTL: Faster than Light” use fairly basic beeps and boops to make a memorable soundtrack. “Evoland” takes the indie love of the old and turns it into a modernized product.

At first, the video game doesn’t appear to have a story. In the first level, a chest reveals a small story blurb that is slowly developed throughout “Evoland.” The noticeable leaps forward in graphics and gameplay elements are joined along with the increasing diversity of story techniques. While it’s interesting, the game’s narrative moves far too quickly. The progression goes leaps and bounds forward and detracts from a game focusing so much on gameplay elements. By the time the full story has appeared, it’s far too late for it to have any impact.

The player takes the role of Clink, a thinly veiled reference to the “Legend of Zelda” series’ main character, Link. The first level of the game opens with a small strip of pixels, where Clink only move right. After moving three squares, he touches a chest, allowing left-to-right movement. When the player hits a leftward chest, Clink is able to move up and down and gain access to the rest of the game world. The entire game follows this pattern, where the players unlock gameplay and movement options as they progress.

Different chests provide graphical enhancements such as 16 colors, music, sound effects and eventually expand to add HD textures. Meanwhile, more gameplay-based changes such as the addition of bows, bombs, turn-based battles and combo moves develop repertoire and broaden the boundaries Clink can reach. These details showcase how far video games have come along outside of graphics.

“Evoland” takes careful time to showcase different periods of gaming. Different styles of combat such as a top-down, a real-time system using only a sword and limited four-directional movement, are replaced with a turn-based system a la “Final Fantasy” along with a healer named Kaeris, a direct reference to the “Final Fantasy” franchise. From there, “Evoland” returns to the overhead view with the addition of bows and bombs and, at a far later point, strings of sword moves that turn into combo attacks. After that, the game returns to turn-based combat, with graphical changes and a difficulty spike. The relatively rapid changes in combat style are even more apparent with the final boss, Zephyros, who has a fight in turn-based form and then once again in real time.

Generally, the combat in “Evoland” is incredibly easy. Few enemies in top-down provide any challenge to Clink. Only in mass numbers are they any threat, but most foes go down in two hits, if that. Turn-based is even easier. Kaeris, the healer, is able to out-race practically every source of damage with her healing spells. Without any real difficulty in combat, “Evoland” begins to drag. The only foes that pose a true challenge are the three bosses aside from Zephyros. Even still, most of the bosses are easily dispatched.

Once the game’s story has finished, there is little left to do. Players can gain achievements by finding hidden areas and cards for a short minigame and by locating stars of Evoland for bragging rights. Locating these items, though, requires returning to the enemy-infested territories, which may have already worn thin on the player.

While entertaining for a first run, “Evoland” fails to have lasting replay ability, with lackluster combat and a questionable plot. Regardless, the evolution of game design is displayed successfully, but it poses a double-edged sword. While the game provides an interesting look at the history of action and adventure, its constant morphing leaves players with little challenge.