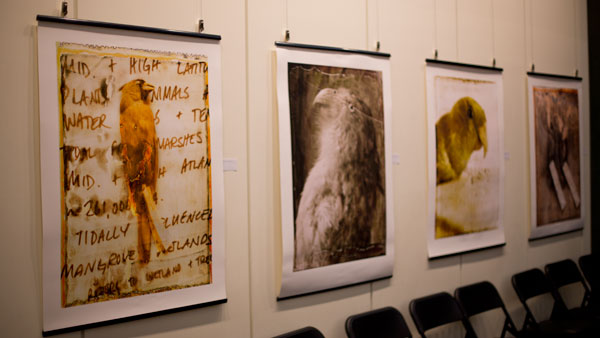 Tucker Mitchell/The Ithacan
Photographs by Denis Defibaugh hang in the Cornell Lab of Ornithology for the exhibit “Afterlifes of Natural History.” Defibaugh achieved the images with alternative means of exposure and oxidation.
By Alyssa Gilliam — Staff Writer
Published: March 5, 2014

Walking into Denis Defibaugh’s new art exhibit, “Afterlifes of Natural History,” the first noticeable aspect is not the exhibit’s photographs, but rather the visitors’ confusion. Spectators reposition themselves to look at a photograph from a different angle or squint with their heads cocked to the side in concentration. For this exhibit, Defibaugh practiced alternative techniques of exposing his film, which results in the majority of his work being abstract, distorted and entirely haunting.

The idea for Defibaugh’s exhibit is rooted in his interest in the aesthetics and taxonomy of bird specimen, which involves the classification of organisms after they have been preserved. But preservation, usually through taxidermy, is not a definite solution because the feathers and skin of the bird are too fragile to be permanently saved. Therefore, Defibaugh decided to use his photography to eternally preserve nature.

To produce the exhibit’s photographs, Defibaugh used instant Polaroid film, which has since been discontinued. He then exposed the film and left it to oxidize in an unprocessed state. Prints are made during the deterioration process of the film before it becomes a completely black sheet. An interesting aspect of Defibaugh’s work is that he used a combination of art and science in order to produce his photographs, and his work clearly reflects both.

As a result of oxidation, the photographs are perplexing and somewhat disturbing. One photograph in particular is of a snowy owl that has deep purple and navy-blue tones around the edges. But Defibaugh’s technique of exposing the film created blurred, white distortions across its body, obscuring it so the owl’s eyes are the only discernable part of the picture.

Many of the images have been extremely altered, and some include birds that have been enlarged to three or four times their normal size. This creates an unnerving effect, making it seem as if the deceased bird’s eyes are staring directly into the viewer’s. Though not applicable to everyone, the grotesque nature of the photographs may negatively affect the way some visitors are able to enjoy or appreciate Defibaugh’s work.

The exhibit was not completely without merit. Notably, Defibaugh’s use of color was remarkable. Some images are black and white while others display vibrant hues. One image in particular, “The Black-headed Heron,” is a vivacious orange color as a result of the oxidation process. This, combined with the photo’s blackened edges that appear scorched and seem to be peeling away from the rest of the photograph, give the illusion that the picture is on fire. Regrettably, while the colors that Defibaugh managed to create in his photographs were striking, they were not enough to redeem the confusing obscurities of his work.

While thought-provoking, Defibaugh’s work felt a bit out of place in the auditorium where it is displayed. There is a stark juxtaposition between the life of the ornithology lab and emphasis on death in the photographs. Ironically, the auditorium where the exhibit is being shown has picturesque nature scenes painted along the trim of each wall, most of which depict songbirds flying through the air. In addition, the cheerful chirping of birds can always be heard from some distant section of the lab. Strangely placed in the middle of this cheerful atmosphere are the nine distorted photographs of dead birds. The location of the exhibit is not cohesive with the artwork being displayed.

Defibaugh’s photographs were eerie and confusing to understand, but they do generate a clear message to his audience: Nature, though beautiful, is temporary unless a way is found, either through science or art, or perhaps both, to preserve it. Those interested in camerawork or taxonomy may appreciate Defibaugh’s style of photography.