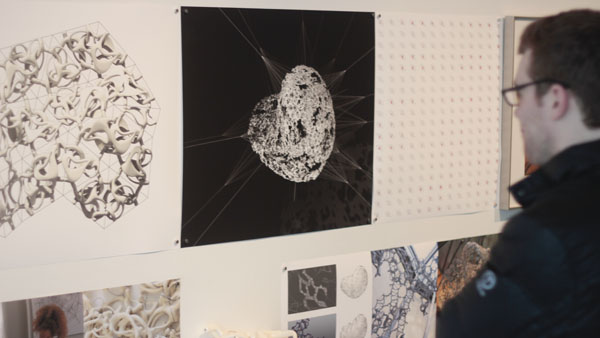 A curvy plastic structure resembling ribs is wrapped in taut wires, reminiscent of a dug-up dinosaur skeleton. It sits, alone on a display pedestal, nestled in the corner of Cornell University’s Bibliowicz Family Gallery.

The sculpture is a smaller-scale version of “Greenhouse and Cabinet of Future Fossils,” a greenhouse made of recycled materials that can be found at the American Philosophical Society’s garden in Philadelphia. The sustainable structure is an original design and part of “Datascapes,” a collection of works by Jenny Sabin, Cornell assistant professor of architecture and artist, who studies generative fabrication — the creation of new materials or environments using data.

Her work in “Datascapes” implements sensors and other computational technology to record observed data of naturally occurring phenomenon and form representative architectural designs. Sabin then uses the collected information to create both 2- and 3-D artwork. The finished designs may encourage discussion, particularly on the applications of sustainability both on a more intimate level and in relation to larger constructions. For example, Sabin develops a high-performing fabric based on motion data collected from a group of athletes. She proposes its use in both flexible knitted sportswear and in the construction of “knitted,” hive-like structures in her projects “myThread Berlin” and “myThread Pavilion.”

On an adjacent wall, a shifting collage of blue and purple reptilian scales is projected. The designs disappear in the absence of movement, where a camera sensor tracks the motion of passersby, feeding the information into formulae that produce ever-changing projections. This installation is an example of the intersection between art and technology in Sabin’s “eSkin” project, where she relates the concept of adaptive visualization to the idea of architecture as a living organism within an environment.

Upon the walls of the exhibit hang sketches, photographs, blueprints and computer-generated graphics that represent different visual solutions for sets of data. This visual documentation, along with careful theoretical and technical explanation of each project, provides visitors with a crash-course education in subjects including architectural design, materials science and biotechnology and information technology.

Tapestries hang adjacent to the projection space, part of the “Fourier Rug Series” named after a binary mathematical sequence used by Sabin to turn color and sound frequencies into the woven designs. This technique manifests in overlapping lines of black and white threaded into patterns on dark cloth. Sabin’s traditionally craft-based art is excecuted with an innovatively mathematical perspective, producing both aesthetically and conceptually thought-provoking pieces.

“Branching Morphogenesis” is another example of this architectural synthesis, using an analysis of interacting lung cells in a 3-D environment to map out real-time exchanges between airways and blood vessels in the body. The resulting picture, reminiscent of a topography map, provides a 2-D template for Sabin’s later 3-D representation. Photographic evidence shows Sabin’s final product, a collection of fluidly bending structures that form a massive walk-through sculpture of thousands of red and white zipties. The intricacy of this piece and Sabin’s other sculptural work are impressive, all of which magnify data points observable on a nanoscale to construct inhabitable spaces in human proportions.

While the documentation of Sabin’s research is philosophically and conceptually compelling, the exhibition itself is lacking 3-D artwork. The most impressive aspects of Sabin’s work — her giant, sculptural installations — are not found in the small gallery. The photography and computer-generated illustrations on display are only screen captures that hint at the larger, more involved work.

“Datascapes” offers some intriguing visual representations of an eye-opening study, but some of the more technical aspects of the exhibit may be difficult for visitors to wrap their heads around without some serious contemplation.