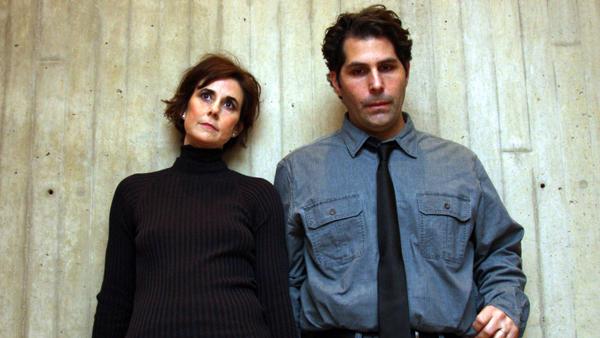 Courtesy of Wendy Houseworth
From left, Anne Marie Cummings and Tony Simione star in “The Mercy Seat.” The show is set on Sept. 11, 2001 while Ben (Simione) worked at the World Trade Center at the time of the attacks.
By Josh Greenfield — Staff Writer
Published: December 12, 2012

With an unparalleled script filled to the brim with comedy, The Readers’ Theatre production of Neil LaBute’s “The Mercy Seat” certainly hits home. Though it’s a staged reading, “The Mercy Seat” is able to brilliantly add real drama to engaging and darkly comical lines to create an intensely believable story.

The production surrounds a man, Ben (Tony Simione), who is engaged in an affair with his boss, Abby (Anne Marie Cummings). As the play begins, we find Ben on the couch in Abby’s New York City apartment, just having witnessed the events of the 9/11 attacks on the news. Ben was supposed to be on an assignment in the World Trade Center, and because of this, his phone begins ringing non-stop from people attempting to make sure he’s alive. These calls, however, continually go unanswered while Ben plans to use the event to fake his own death and run away with Abby. Though Abby is initially on board with the idea, she becomes hesitant as the couple discusses the logistics of the situation. As the conversation continues, drama unfolds and the true emotions of both characters are revealed.

Both performers succeed in their roles by creating a realistic relationship. Cummings, however, stands out through her gripping portrayal of Abby, who is full of rapidly changing motives and emotions. Cummings, who also serves as the artistic director for The Readers’ Theatre, is able to completely change the audience’s perception of her character with her consistent believability and truth. While at times her character seems antagonistic, Cummings constantly adds raw emotion to quickly gain empathy. While Simione is intense and believable in his role, the quality of Cummings leaves him behind and causes his performance to come off as bland.

Also of note is the production’s ability to work around the limits of being a staged reading. Script readings can come off as simply being a reading of a text, but “The Mercy Seat” proves to be a fully developed story. The show’s natural staging allows the scripts the actors are holding to simply blend in. At many points in the production, the scripts seem to almost disappear as the actors work around them — they hardly cause a detraction from the story. This skill enables the emotion of the characters’ relationship to thrive and develop.

The direction, by Bryan VanCampen, helps greatly with intimate and simplistic blocking. Though the set consists primarily of a single couch on a raised platform, VanCampen’s placement and staging creates the illusion of the couple being in a full apartment, complete with windows to the outside world. VanCampen’s affectionate staging helps exhibit this relationship to only increase its truth and connected emotion.

Like most aspects of the production, the lighting and sound is also minimalistic but still succeeds greatly. The lighting is a single hanging lamp that manages to illuminate both actors completely. The sound, which consists of a prelude score composed by Peter Rothbart, professor of music theory, history, and composition, is ominous and immediately places the audience in the serious mood of the play.

Overall, the informal style of the entire production works perfectly to help describe the location and story of “The Mercy Seat.” Cummings shines in the pair of actors, who together create a believable and captivating relationship. The groundbreaking story of this 9/11 staged reading proves to be highly memorable and may cause viewers to leave the small, ad hoc theater questioning how some of their own relationships would play out when placed under extreme circumstances.