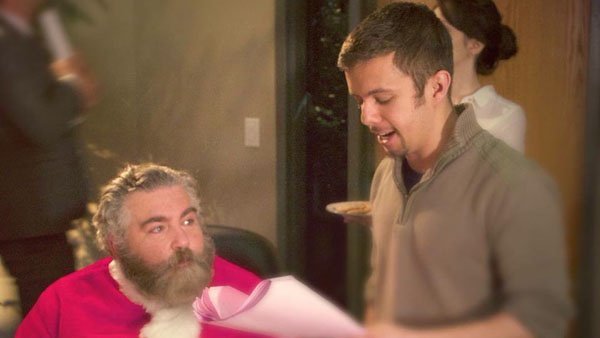 Santa Claus is pissed. His sleigh crashed on Christmas Eve, so he’s suing the company that allegedly sold him the faulty sleigh.

This is the premise of “Rudolph vs. Reese,” a screenplay written by Mitchell Ward, sophomore television-radio major. The screenplay won the David Ames Film Award last November, which gives one full-time Roy H. Park School of Communications student up to $5,000 to hire a production crew and produce an original script. “Rudolph vs. Reese” is currently in post-production, and the screening will be May 4 and May 9 in the Park Auditorium.

Ward used the prize money, plus another $2,507 raised through an IndieGoGo campaign, to hire professional actors and film the 15-minute, dark comedy movie in Ithaca over spring break. Ward said he began writing the script over the summer prior to learning about the award.

“I somehow just started to think, ‘What if Santa Claus existed?’ in the real world with real rules,” Ward said. “The original idea was actually that he was selling his company, he was selling the North Pole to another company, and it was a little more sympathetic on him, but then it just kind of evolved into something darker with higher stakes.”

When Ward got past the first round of auditions for the award, he called up friend and former collaborator Talia Koren, a senior cinema and photography major, to see if she was interested in helping him produce the film. Ward also asked junior television-radio major Erich Westfield to work as the film’s director. Westfield said he was not surprised when he learned Ward’s script had been selected.

“Once I read the script, I knew that we had it in the bag,” he said. “He did a great job, it was very well-written, and it had so much potential, so we knew that if we could make a good plan that we would win it.”

After officially winning, Ward and his team began planning the next steps of production.

“There was this immediate synchronicity between all three of us, and then the other people who were brought on, of what it was about,” Ward said. “From there, it was just a perfect working relationship.”

In January, the crew headed down to New York City to cast. For two days, the crew members sat through more than 100 auditions from professional actors competing for five roles. Koren said it was important for them to get a higher caliber of actor than what they might have found from students.

“To successfully make [the film], we knew we couldn’t make it on a low budget,” Koren said. “We needed actors that would match the level of the writing, which was above student-level.”

Westfield said he was mostly looking for actors who physically fit the parts they were auditioning for and who could pull off the dark humor in the script. In casting the elf, he was looking for an actor who could pull off a cunning, fast-talking character reminiscent of con-lawyer Saul Goodman in the television series “Breaking Bad.” Before casting, the part of Santa Claus was what worried him the most.

“In the script, he’s this kind of maniacal, gritty Santa that we would never see,” Westfield said. “So we had to find someone that looked like that, who was old and had a beard, but could also pull off this manipulative, evil character that he is in the script.”

They found the perfect actor for the dark antagonist in Theodore Bouloukos, a professional actor they cast in New York City, and the team had the actors come up to Ithaca for 4 1/2 days during spring break to film. Though the script was completely conceived and written by Ward, as script supervisor he said he didn’t have a problem stepping back and letting Westfield take over the filming.

“I tried to let Erich do his thing on set,” Ward said. “I’ve heard stories about writers trying too hard to direct on set. In the real world, writers usually aren’t allowed on set, so I tried to just be an observer and let Erich take creative control of it, and he did an awesome job.”

After post-production of the film, Ward expects the creative team will tweak the film a bit and send it off to festivals. Westfield said he’s extremely happy with the film so far and has never worked on such a flawless production.

“I think everyone that worked on the film is one of the best at what they do, and everyone is putting in their hundred percent, and it showed,” Westfield said. “From preproduction to production to now in post, we’re really excited for when it’s finally able to come out.”