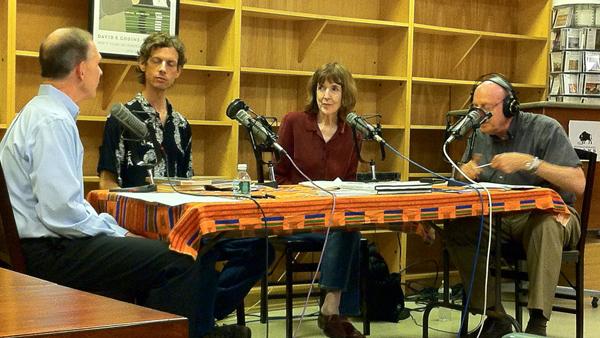 Having begun as a way to connect Ithaca writers and lovers of writing, the annual Spring Writes Festival has expanded its programs as it blossoms into its fourth year May 3.

Spring Writes, put on by the Community Arts Partnership, will take place this year from May 3 to May 5, with an extra closing event on May 12. The festival will host about 30 events, including writing workshops, readings and panel discussions on topics from self-publishing to writing as a social cause. The events will occur at local bars, the Tompkins County Public Library and Ithaca College, as well as other areas in downtown Ithaca.

Brett Bossard, executive director of CAP, launched Spring Writes four years ago after the New York State Council on the Arts approached him. Bossard said they were wondering why they had so few requests for funding from the Finger Lakes area, so CAP sent out surveys to gauge how strong the literary interest of the area was.

“The level of interest that came back was really high for there to be more programming and hopefully one day more of an organized writer’s center for the region,” Bossard said. “The festival was really the first step in that direction in receiving some grant support from the New York State Council of the Arts.”

This year, Bossard said, Spring Writes has expanded to almost 30 different events, as opposed to 25 events at last year’s festival. The event will kick off with a “pre-game” party, called the Trampoline Storytelling Competition, which will be at 7 p.m. May 2 at Lot 10 Lounge, Bossard said. For the competition, participants will present a five-minute fact or fiction story with no notes.

Bossard said Trampoline has been a popular event in the past, and it was this popularity that made CAP decide to bring it back this year.

“One thing that’s nice about a literary festival is that I feel like we have two tracks of audience, one that’s sort of general public or readers and one that are writers,” Bossard said. “And so we’ve got a little bit of everything for people, whether they’re just appreciative of literary arts or whether they’re practicing now. So Trampoline sort of mixes it together, because it’s storytelling with no notes, and you have to go up and be creative on the fly.”

Bossard said Leslie Daniels, a writer living in Ithaca who recently published a novel titled “Cleaning Nabokov’s House,” has served as artistic coordinator for the festival for the past three years. She helps recruit people to come and lead discussions and workshops. As a published author with background as a literary agent and editor, she has lead discussions in past festivals.

This year, she is leading a few different panels. The one she said she’s most excited about is a panel on instructional writing.

“We have the amazing Amy Dickinson who writes an advice column, and some other very fun people to talk about how they use writing to tell people what to do,” Daniels said. “The panels are lively and fun and bring people into conversation who wouldn’t necessarily otherwise even know each other or talk to each other, so they’ve drawn from the people who are editors in the community and teachers and really fine writers.”

Bossard and Daniels said one of the most important parts of the festival is the networking. The festival, they said, connects writers to other writers and to potential readers of their work.

Eleanor Henderson, a writing professor at Ithaca College and author of the novel “Ten Thousand Saints,” was a panelist at last year’s festival and will also be participating in two readings at this year’s. She said when she first moved to Ithaca a few years ago, she wanted a way to connect to other writers in the area. Spring Writes was able to do just that, she said.

“It’s such a fantastic town for writers, and yet we don’t always have that much time to get together, and so something like Spring Writes is really nice, because it offers a sort of neutral ground for writers to come down from the hills and get together and have conversations and read each other’s work and celebrate each other’s work,” Henderson said.