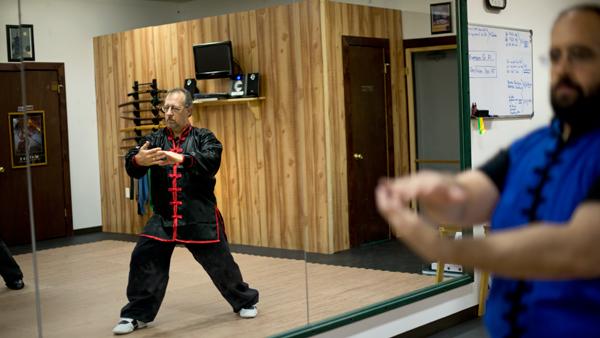 With knees slightly bent and arms stretched forward in a circular shape, four adults breathe in deeply, their serene expressions and physical stances harmonious with the quiet music that plays in the background. After a brief period of stillness, they bring their arms down to their sides at an individual pace and wait to move on to the next phase.

This exercise is known as qigong. The 4,000-year-old meditation is practiced all over the world, including locally at Dragon Fire Martial Arts school in Trumansburg, N.Y. The Ithaca College campus will also soon partake in the peaceful meditation.

Junior Nils Schwerzmann said he has tentative plans to collaborate with his instructor, Kevin Hufford, to create a club for students interested in practicing qigong.

Qigong originated in China and is a type of healing practice that focuses on the regulation of the body, breath, mind, Qi and spirit. Over time, qigong has gone through many changes because of various interpretations, and it has expanded into hundreds of styles.

Hufford, owner of the school Dragon Fire Martial Arts and instructor of the sword team at the college, said qigong is divided into five main types, some of which include medical, Daoist, Buddhist, Confucian and martial purposes. But the styles are not mutually exclusive and often share similar qualities.

“The word ‘Qi’ means energy, and ‘gong’ means work or discipline,” Haltom said. “So, qigong as a word means energy work or energy development. The development of one’s internal energy.”

Haltom teaches both privately and in small classes at the City Health Club. Typically, he will begin his class with a brief warm-up period of breathing exercises and gentle movement.

“The idea is relaxing the body and opening up channels of energy,” Haltom said.

He said the relaxing qualities of qigong are one of the many reasons he was originally attracted to the martial art.

“I was just taken by the beauty of it and also taken by the way it relaxed me — being the type A kind of person that I was when I was young,” Haltom said. “It really balanced me.”

Many become involved in qigong to achieve the same kind of balance. After taking the time to practice relaxing motions and the even breathing patterns, Schwerzmann noticed immediate results in attitude.

“I find myself not as frustrated either with myself or with others,” Schwerzmann said. “I notice as the school workload may increase, I feel like I can handle it a lot better.”

Qigong is not limited to lowering stress levels and fighting off negative emotions. The physical benefits of the activity attract many martial arts students, such as Donna Resue, a student at Hufford’s school.

“[Qigong] helps your body work properly and fight off infection on its own,” Resue said. “It’s good for your well-being.”

Ithaca’s attraction to qigong is not new. When Haltom taught in the 1970s he would have as many as 80 students in a room. Since then, interest has dwindled, but he continues to have people come to him to learn the art. He believes the city’s interest in qigong relates to the community members’ kinship with nature and an inclination to connect with the world and its flow of energy.

“There may be a kind of remaining spiritual kind of appeal that this place has for people who have those kinds of sensitivities,” Haltom said.

In response to a kindling interest in the student body, Schwerzmann has proposed a club for the campus. Members would attend group-oriented classes and follow up on curriculum that Hufford would set up. Schwerzmann said the ideal club would include Hufford’s instruction. Just as he takes time to help the college’s sword team, he would come and teach them on a weekly basis.

The club would be open to anyone who is interested in qigong, even if they have never had any experience with the exercise.

“No matter how well you think you can deal with anything, it’s just a way to improve all of your health,” Schwerzmann said.