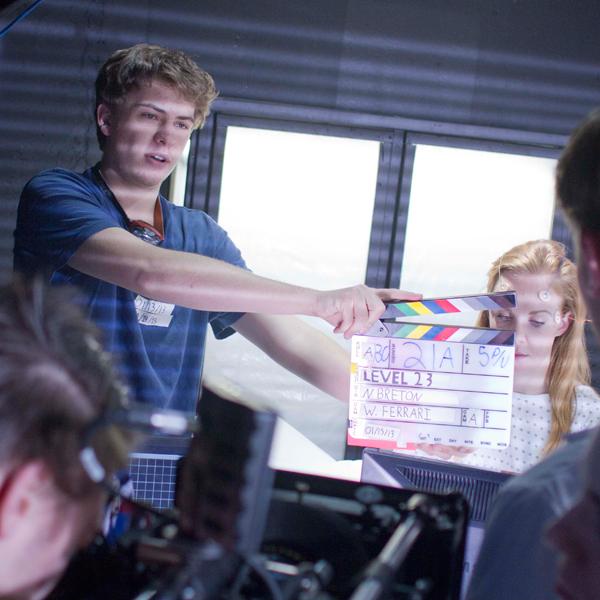 A barren room with a cement floor and four black walls lies within the studio space at Cinemapolis’ old location. In just a few months, however, it will be transformed into a high-profile movie set by creating walls and tables using drywall and fluorescent lighting.

The college recently rented the old Cinemapolis theater in downtown Ithaca to be used as a set for student films. The room was used for the first time in January as the set of the senior thesis film “Level 23.”

Carol Jennings, director of the Park Media Lab and overseer of the studio space, said students and alumni wanted to learn more about the business aspect of entertainment, and the studio space is a way for students to practice.

Jennings said the space will mainly be used for faculty projects and by a new co-curricular organization on campus, the Transmedia Studio. This organization will also use the downtown studio as a production space for sets, planning, office, casting sessions and public screenings.

“The purpose of the studio is to provide students at Ithaca College with an opportunity to practice creating film and other types of media productions for all distribution platforms by following a business model that mirrors the professional model,” Jennings said.

The first students to use the downtown space were seniors Wade Ferrari, the “Level 23” cinematographer; Garrett Thoen, a writer and actor; and Nathan Breton, the director. They joined together in February 2012 to start the eight-month long process of constructing the “Level 23” script. After a year of preproduction and a week of production using the downtown studio space, the producers are currently working on postproduction, with the release date set for May 2013.

“Level 23” surrounds an astronaut who returns to Earth after a mission in space. After his admittance into a medical facility for a routine check-up, the scientists realize that a creature with the ability to imitate human form has taken the astronaut’s place. While the creature first lacks basic human behaviors, it soon learns and begins to duplicate all human characteristics.

One of the biggest hurdles for “Level 23,” Breton said, was determining the correct location. The film required a specific set with medical equipment. However, the accessibility of medical facilities is incredibly restricted, Ferrari said.

“The issue was that no medical facility’s going to let a bunch of college kids shoot somewhere in an environment that needs to be sterilized afterwards,” Ferrari said.

Breton said the group was frequently disappointed with locations until they heard of the college’s downtown space.

“We toured the studio, the next day we designed our set without even knowing if we could shoot in there. The following day we got permission, and by the day after that we were building,” Breton said.

Over the span of seven days, they built the set themselves and worked right up until production day, Ferrari said. Thoen said they used drywall, plaster and wood to create walls and tables on the set.

“It’s kind of like paper sheet pressed together,” Thoen said. “It’s made of what the walls are made of in your home. We were essentially building a professional wall, so we had an advantage for using drywall. We had to make the wall look as professional as possible.”

Jennings said she is impressed with the executive student producers’ work, having been the first to use the new space.

“It exemplifies this coming together of both the creative process and the thoughtful planning and responsible execution of a project,” Jennings said. “It models exactly what we want to do more of downtown.”

The producers said the experience of building the set was physically exhausting but incredibly valuable.

Breton said constructing the set to their satisfaction was a challenge.

“It’s real-world application,” he said. “We don’t have endless amounts of money, but at the same time we do have really high expectations for the image that we want.”

Thoen said the set gave the producers “creative flexibility,” which resulted from the ability to design their own set. Junior Molly Schneider, the production designer, also credits the location with much of the success of the production.

“That set provided us with the freedom to kind of make it come alive exactly how the script would want it,” Schneider said.

Breton said the project was more than just their senior thesis — it was a way to work together with a group of friends.

“It was not a ‘I want to put my name on this project,’ it was, ‘I’m going to work with these people and be proud of what we come up with in the end,’ and at the screening all of us can feel really proud of what we did together,” Breton said.