We Are One to perform darkly themed play 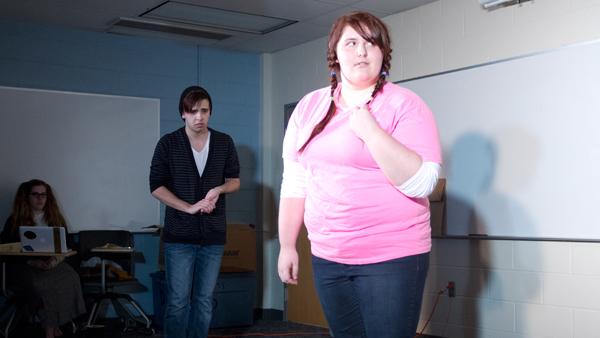 A group of 4th-graders walk onto the stage. Out of them, one steps forward tentatively and announces, “Johnny wrote this before he shot himself.” With that, “The 4th Graders Present an Unnamed Love-Suicide” opens.

We Are One, a student organization founded in January that aims to promote self-positivity, will host a performance of “The 4th Graders Present an Unnamed Love-Suicide,” which surrounds a 4th-grader named Johnny who has recently committed suicide. Instead of a typical suicide note, he writes a play. His classmates take the written product and perform it for the school as a way to cope with their loss.

The play also involves Johnny’s (freshman Jacob List) love interest, Rachel (freshman Rachel Garrity), who gets tormented for hanging out with Johnny by a jealous female bully. While love triangles form and betrayal looms, suicide sets in, and the play leads to a dark and doleful conclusion.

After the performance, there will be a “talkback” with freshman Michael Marchese, director; freshman Lauren Angelos, assistant director; and the cast on the themes of the play and the organization.

“The 4th Graders Present an Unnamed Love-Suicide” portrays bullying as being less directed at one’s sexuality and more at people who want to fit in but for whatever reason cannot. The bullying shown in the play includes hair-cutting and physical and verbal violence. With the recent focus of the media on bullying as it relates to the Lesbian, Gay, Bisexual and Transgender community, “The 4th Graders” presents a less sexuality-based view of the causes of bullying, which List said makes the play’s message stronger.

“You hear a lot about teens killing themselves because of being bullied for being gay, but you don’t hear about the people that are being bullied because they have a weight problem or are of a different descent or they just ‘look weird,’” List said. “I do identify as gay, I sympathize for kids that are bullied for being gay, but they’re not the only kids. I think that our society has gotten a little sidetracked by that. It’s also about the other kids who also don’t fit in.”

Gerrity said the focus on the characters’ perspectives is what makes the play stand out.

“All of the characters are interesting, because you don’t just see the perspective of the person being bullied, you get to see the inner pain of even the people bullying,” Gerrity said.

List isn’t an official member of We Are One. He met one of the founders, Marchese, in the summer. When Marchese needed a new actor, List stepped into the role. He said the rehearsal process and the directing style has been a good experience, because he’s been able to maintain a close bond with the cast and directors.

“We’re not just all actors acting in a show,” List said. “We’re a bunch of people who like each other offstage going on stage and putting on something we all collectively want to do.”

We Are One has struggled to obtain the funds it needs, which is why this play also serves as a fundraiser. Angelos said the rights to “The 4th Graders Present an Unnamed Love-Suicide” were purchased out of pocket. She said the reason this show was chosen was because of its anti-bullying message.

“This show has so much bullying it’s ridiculous,” Angelos said. “It’s a dark humor play. There’s some humor, so it isn’t all sad, but it is deep.”

We Are One will be performing “The 4th Graders Present an Unnamed-Love Suicide” in the Clark Lounge at 8:30pm Friday. Tickets will be sold at the door and cost $5. All proceeds go directly to We Are One.