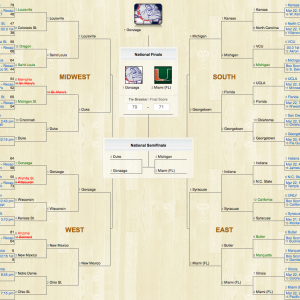 It’s 10:30 on Thursday night and I feel obliged to write a blog about March Madness. Probably should’ve written a post earlier this week to fill my quota, but I sank into a small aggressive depression once I realized that it was still 30 degrees and snowing in Ithaca and I had piles of homework to do. Sorry.

I also apologize if reading about someone else’s bracket is equally as awful as listening to someone talk about their own fantasy football team because, honestly, no one really cares if you lost because Shonn Greene averaged 1.7 yards per carry.

But, here you have it. This is the official bracket of The Ithacan Sports Blog. When I put it like that it sounds like you should care.

So, yeah, I didn’t just pick mascots or flip a coin. Here’s to hoping you don’t lose money to someone who did.