My Gram grew up on a farm outside of Scranton as one of nine children. Whenever we go back to visit her childhood home, she always point out the one-room school house that she attended from first to eighth grade (she had to drop out of school after that to work on the farm). Needless to say, my grandmother is not your most educated woman (Case in point: she calls President Obama “President Omaha.”).

But there’s always been one area where my Gram has succeeded, and I’ve failed: foreign languages. I started taking Spanish class in seventh grade — because that’s what everyone was taking. Add on four years of high school, two years of college and I still do not feel comfortable speaking Spanish. But Gram was a different story. Born to Russian and Polish immigrants, she didn’t speak English until she started school. English, like most families’ homes at that time, was  banned from her house because her parents had difficulty understanding it. As a young adult, Gram was bilingual in Polish and English and spoke enough Russian to get by (apparently her Russian father John Balanovich wasn’t much of a talker). But after her parents died, there was no one left to speak Polish with her. Her siblings refused. Her children didn’t want to learn. And all her grandchildren wanted to learn were the curses and drinking songs.

But I think what’s sadder is that my grandmother, an uneducated farm girl, could fluently talk in Polish. Meanwhile, I sat on the edge of my seating praying that I’d be able to remember all the verb tenses for a quiz that as soon as I’d get that A, the tenses would fly right out my head.

Recently, a number of colleges are cutting some foreign languages from schools. The number of enrolled students is declining. But as disappointing as that is, students can’t learn a language in just a couple of semesters of colleges. We can’t even learn starting in high school. That drive to learn a language fluently starts when we’re young. If Gram had been older, there is no way she would have been able to balance Polish and English. But since she started so young, I’m sure she didn’t even think about it. It was just a way of life for her.

So what can the American school systems do? Start teaching a different language to young kids the same time they start learning their ABC’s. That way, more universities can add foreign language programs instead of cutting them.

(and because I know you are all dying to know what Gram looks like, here she is with my brother Joey on his high school graduation day. And yes, she does draw her eyebrows on). 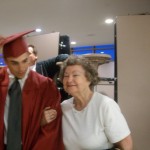