Obama, did you hear us knocking?

If you received word that there was a group of people walking 3,000 miles across the United States, and their end destination was your house, would you take the time to greet them when they arrived? If one of these cross-country adventurers wrote you a letter every day of this journey, describing to you in detail the lands she traveled through and the beautiful stories of the hundreds of people she met, would you write back to her?

President Barack Obama was presented with this very situation as the Great March for Climate Action made its way from Los Angeles to Washington, D.C., starting earlier this year on March 1. On Saturday, November 1, the Climate March completed its journey. I was among them, having walked about 1,800 miles from Taos, N.M to Youngstown, Pa. and then the final seven-mile stretch from Bethesda, Md. into the nation’s capitol. It was a surreal moment as we rounded a corner and the White House came into view. Although our march into D.C. was only a few hundred strong, we carried with us the questions, comments, hopes, concerns, and dreams of thousands of others we had met along the way. Many were written down on little index cards strung together in a garland, but countless more were written down in our memories, carved into our hearts. We had told these people we would take their words to the White House and demand they be heard. 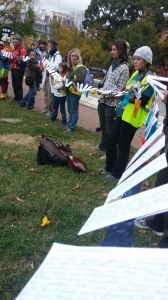 The garland of messages from across the country 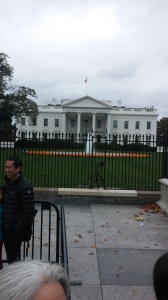 The Climate Marchers definitely upheld our end of the bargain — we carried these stories with a sense of honor and purpose — but unfortunately our plea to be heard was not answered. Although every person I met on the March was remarkable and influenced me in some way, Mary DeCamp was a character who stood out even among the extraordinary. Mary wrote to President Obama and his family every day for 246 days, and amazingly, she never ran out of things to say. Each of her letters came from the heart, and she always tied the message into the day’s experiences and the environmental issues we encountered in each state. I was always proud to be able to put my signature at the bottom of her letters, and if I was asked to pick a favorite, I’m not sure I’d be able to.

Mary frequently made requests for the President to come greet us when we arrived, and sometimes she even invited him to join the March. In one memorable letter sent over the summer, she made a very convincing pitch. Where else can you get such a fantastic summer vacation for only $20 a night?

After all of our hard work and incredible adventures — Berenice getting lost in the desert, John J. accidentally wandering in Kansas, Steve developing a blister that covered the bottom of his entire foot, Mack walking most of the journey on crutches, hunkering down against tornadoes, talking to people who had never heard of climate change, Jimmy fighting off mountain lions in Colorado, myself getting hit by a car outside of Toledo, not to mention all of the beautiful sights, the late night conversations and the soul searching and finding — our arrival in D.C. was anti-climatic in comparison. 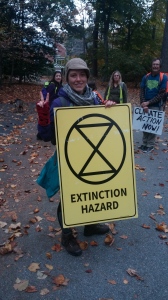 Sean Glenn, who marched from Los Angeles, preparing to March into D.C. 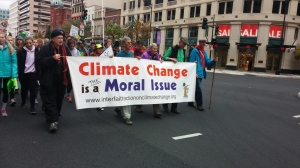 The front of the March into D.C.

As we stood in Lafayette Park in sight of the White House, individual Marchers climbing up onto a little, rickety stage and using a megaphone to read out a selection of the index cards, I looked around the crowd and saw mostly familiar faces. Our words were not falling on any new ears, let alone any ears belonging to a person who had the authority to create immediate action and change.

The whole ordeal left me with the question: what does it take? To what length do the citizens have to go to make our concerns heard and to have them taken seriously? In a supposed democracy? President Obama, I must be bold enough to ask you, in what world does one not take time to greet the dedicated folks — ambassadors for the country’s citizenry — who walked 3,000 miles over 8 months to see you? What meeting were you in that was too important to cancel? What excuse do you have? I certainly hope your answer isn’t, “your arrival was too close to elections.”

At the very least, couldn’t Bo, the First Dog, have come out and had a play date with Birdie, our March mascot? 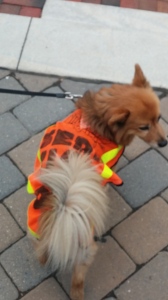 I write this blog post on the train ride from D.C. back to New York, where I intend to plunge wholeheartedly back into my community’s campaign to save Seneca Lake from the disaster of gas storage in unstable salt caverns. Although I am happy to put pressure on leaders like Obama, Gillibrand, Schumer, and Cuomo to stand up against this awful project, I will not give the responsibility of creating change to anyone but myself.

Because at this rate, we’ll be underwater before the United States government and leaders take sufficient action on climate change.