Seed Is Sacred wants you to repent

Perhaps I’m jaded, because at first glance I figured @SeedIsSacred was some sort of atheist-created parody account. Who else would hop on Twitter and command other users to “repent” for making offhanded twitter comments about pleasuring themselves? Turns out, this guy.

He calls himself a Sperm Warrior.

Twitter let him back on their service later Monday afternoon, and since then he’s been Tweeting about the godly way to dispose of man’s genetic material: into a uterus to which you’re married.[2] Seed Is Sacred calls himself a “Proud, true Catholic”; for an overview on the Catholic doctrine regarding semen and procreation, click here. SIS also spends a significant amount of tweets grumbling about the “filth” on Twitter and asking unnamed Internet moderators to remove tweets parodying the account or mocking its message. 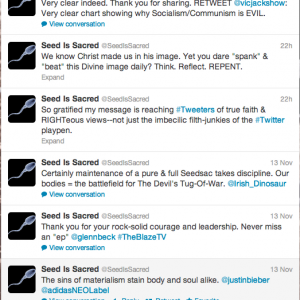 What do you make of a man who calls himself a Sperm Warrior?

I got in contact with Seed Is Sacred and either had a conversation with a very religious man who understands the Catechism of the Catholic Church far better than he understands Twitter, or chatted with a very dedicated satirist.

SK: Why did you decide Twitter was the proper platform to discuss this issue? Why this issue over say, gay marriage or female contraception?

SIS: I’d heard that Twitter was a forum where one could reach young and open minds. But I’m disheartened by the muck one must wade through.

SIS: The fight of faith is always the fight to win over young minds. The muck and swamp of coarse sexual talk is repugnant and overwhelming.

SK: Is this about conversion or using seed? What makes you so passionate about THIS particular topic? Somewhat relatedly, are you married?

SIS: Seed is the genesis of life. Sinners pervert his plan for life-creation in their irresponsible caretaking of their reserves. I am married.

SK: So this is essentially techno-evangelizing against, in your view, wasting the means of reproduction. Are you also against condoms and other contraceptives?

SIS: Yes, as a true Catholic I am against them. #Prolife groups focus on the moment of conception. My focus comes earlier: on His seed.

Seed Is Sacred allowed me to publish the discussion because it would reach college students, the “young minds” he hopes will become parishioners of his microblogging ministry.

Maybe I’m jaded, or maybe I follow one too many satirical Twitter accounts, or maybe the disparity between two people’s social, political and religious views can be so drastic that one man’s sacred quest is another man’s biting satire. Maybe the larger point is that religious types can now surpass your doorbell and head straight to your inbox to share their doctrine.[3] Regardless of the sincerity of Seed Is Sacred— and at this point I do believe this man’s tweet-preaching is in earnest— I don’t recommend tweeting about the next time you ejaculate for non-procreative reasons. But I didn’t recommend that before Seed Is Sacred came along, either.

[3] Is it easier to close your blinds or to ignore an @ reply? Discuss.