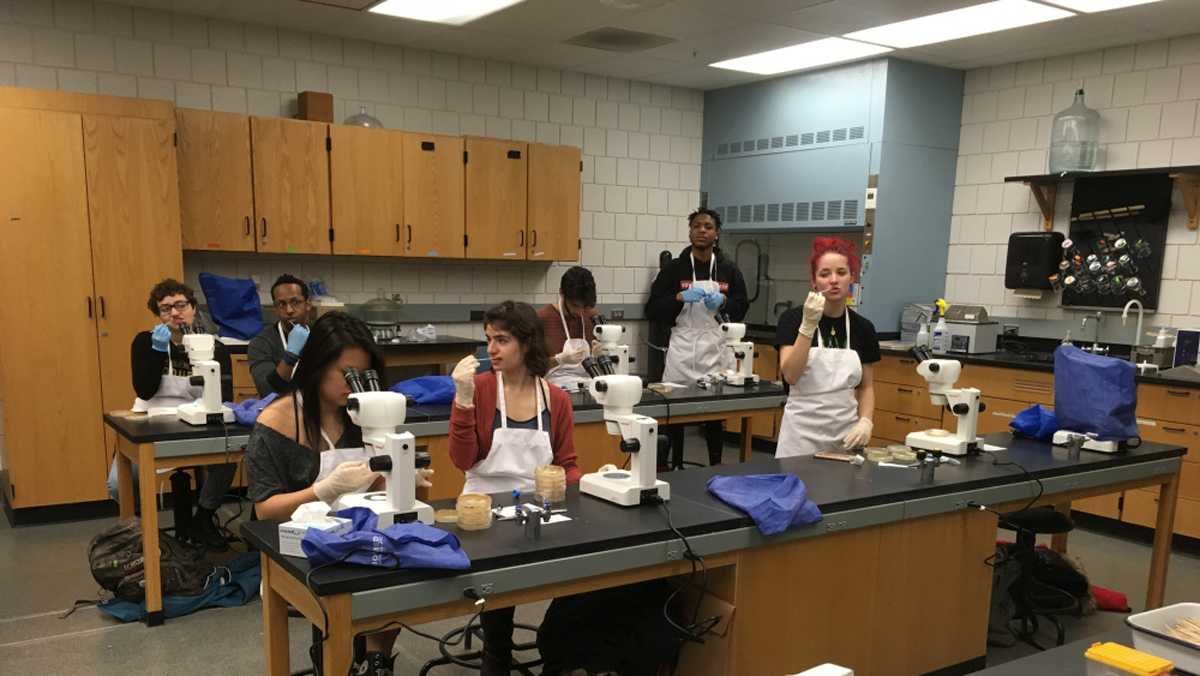 Courtesy of Sarah Sutton
The Intermediate and Advanced Drawing classes collaborated with a biology research lab to study oral microbiomes and how they tie into into a person's understanding of their identity.
By Sierra Guardiola — Life and Culture Editor
Published: March 21, 2018

Bacteria cells are thought to be equal to or outnumber the number of human cells in the body. A collaboration between art and biology students at Ithaca College is exploring how a person thinks of themselves once they understand how much of their body is made up of bacteria.

Intermediate and Advanced Drawing taught by Sarah Sutton, assistant professor in the Department of Art, and a research lab run by Dave Gondek, associate professor in the Department of Biology, are collaborating to explore the microbiomes, bacteria that coat the surface of the body, that exist within students’ mouths. The art students are creating self-portraits looking at how their microbiomes relate to their identity, and the biology students are exploring microbiomes through a scientific analysis of bacteria. The goal of the project is for students to gain a deeper understanding of how they define themselves and their identity.

“There was this really easy connection between thinking about ourselves and who we think we are and bacteria,” Sutton said. “It gets people thinking outside of their disciplines.”

The students were split into groups consisting of both art and biology students and were instructed to take swabs of their mouth to track the changes that occurred after altering one aspect of their everyday life. Some groups chose to use mouthwash twice a day, while others chose to drink kombucha. The members of each group would take a swab of their mouth at the same time each day, which would then be examined by the biology students to see how the microbiomes changed over the course of the project. 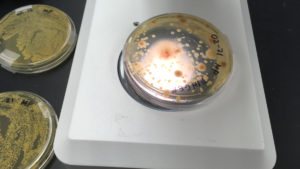 Students examined how small changes in their lifestyles could affect their oral microbiomes. (Courtesy of Sarah Sutton)

This project is the second microbiome collaboration Sutton and Gondek have done, the first being held in Fall 2017. When they heard about the President’s Seed Grants, which provide funding for original, cross-disciplinary collaborations on campus, Gondek said they wanted to apply because their project aligns with the purpose of the grant.

“This is a really great example of some the inspiration that you can get out of the college community,” Gondek said. “That mixing of ideas can lead to some really awesome, interesting things like the art show we are going to have that has science and art mixing together.”

President Shirley M. Collado granted Sutton and Gondek a seed grant of $5,000 for the project. The grant allowed the group to send out samples of their microbiome swabs to be sequenced. Sequencing is when a strand of a person’s DNA is tested to see what variants are constant and what is unique to that individual’s DNA. The results of the tests are used for the students’ final projects, which consist of both portraits and scientific posters. The biology students are creating posters to display at the The Extended Self: Art and Microbiome Symposium held March 23 that will display the reasoning, methods, results and conclusions of the experiments that were conducted. Since the results were sent out for sequencing, the biology students had to work under a tight deadline, which sophomore biology major Isabella Julian said was the most challenging part.

“With it being my first full-on research project, I was nervous about the time constraint, but I luckily had great people … to help me along,” she said.

The art students were prompted to create three works of art relating to understanding themselves and their bacteria. The students made contour drawings of themselves, onto which actual bacteria was then overlaid. They also created a bacterial abstraction painting exploring immaterial aspects of self-concept and bacteria. Lastly, the students had to incorporate portraiture and microbiomes to explore intimacy, physical space or the political implications of biology.

Senior art student Maria Squillini said before this project, she did not know that microbiomes existed or that they affected the way a person behaves and interacts with other people.

“It’s interesting to see that science does have an impact on my everyday life,” Squillini said.

Sutton has been exploring the intersection between art and science for many years. Her first collaboration with the science curriculum was with Gondek in a freshman seminar that they taught about genetic engineering using CRISPR, a genome-editing technology. In this project, students made collages by splicing together unrelated snippets from magazines. Once they completed this collaboration, Sutton knew exposing art students to science would help them become better artists. 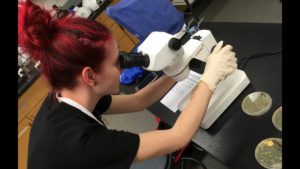 Sophomore art major Kalina Hertafield examined bacteria from her oral microbiome under the microscope during the collaboration. (Courtesy of Sarah Sutton)

“In making art, ideally you know what is happening in your world,” Sutton said. “Understanding current science for art students is really important.”

Sutton worked with Luke Keller, Dana professor in the Department of Physics and Astronomy, and his class about quantum mechanics and the idea of space–time. Sutton said the physics students needed to visualize this concept to create the map of the quantum mechanics concepts they were learning. By having the art students work with the physics students, Sutton said, they were able to make something tangible out of something abstract.

Junior art major Matthew Palmeri said he was happy that he participated in the microbiome collaboration because it combined two concepts that he otherwise would not have thought were related.

“It goes to show that you can relate just about anything to art in the sense that you can represent it and explore its concepts visually,” Palmeri said.

One of the major pushes of the project is to get students to think deeper about what is happening in their everyday lives that they may not see, Gondek said. Squillini said she is excited to see how everyone interprets the project and how it is different from the way she interpreted the thought of interpersonal space. She said she is also excited to show her friends the work she produced in class.

Palmeri said the opportunity the students were given to collaborate was beneficial for him because as an art student, he said he is off doing his own thing most of the time. He also said the project is not one he would pick up on his own.

The Extended Self: Art and the Microbiome Symposium will be held from 5 to 7 p.m. March 23 in the Ithaca College Creative Space Gallery.

There are 1,500 bacteria living on each square centimeter of a hand. Every material and surface a hand touches holds the same amount of bacteria, if not more. Michael Holbert ’05 said this fact inspired him to apply antimicrobial properties to several materials. He has become the first person licensed in the U.S. by XTIO2…

Looking through the window of the newest eatery in Ithaca, it is customary to see a little girl in a blue dress and rain boots diving fearlessly into a ball pit or munching happily on some candied ginger or an avocado.

From a 15th-century woodcut depicting the scene of the Fall of Man with vine-covered, leafy trees to a print of a tree farm in China littered with plastic bags, the latest exhibit at the Herbert F. Johnson Museum of Art at Cornell University looks at trees from all angles.

Art branches out with pieces on trees