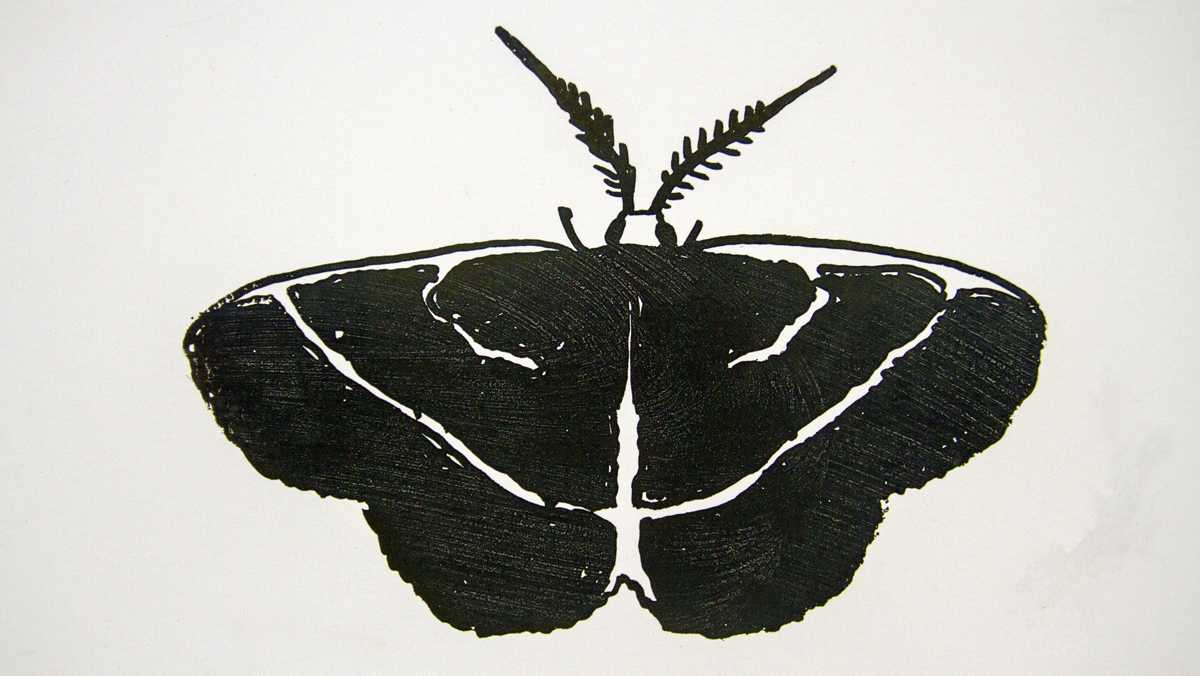 Jackie Marusiak/The Ithacan
Pamela Drix, lecturer in the Department of Art is teaching a class in which students use printmaking techniques to create moth prints. These prints will be part of an international art installation in Australia.
By Vivian Goldstein — Staff Writer
Published: April 2, 2019

Though moths are often associated with contaminated food, clothing damage and lamp memes, Ithaca College’s Intermediate Printmaking-Lithography class students are reimagining them as beautiful creatures to be celebrated.

The students are participating in the Moth Migration Project by printmaking various species of moths that will be part of a larger exhibit in Australia, first at the Bundaberg Regional Gallery and then the Gympie Regional Gallery.

In the Intermediate Printmaking-Lithography course, students learn how to make prints by using lithographic plates meant to hold greasy materials, which work well with the greasy inks that artists use. The negative spaces of the print are then treated with water-loving substances that repel grease, and the chemicals’ repulsion creates the print.

The Moth Migration Project took flight in 2016 when Hilary Lorenz, artist and Long Island University professor, created a crowdsourced, traveling exhibition of hand–printed, drawn and cut moths — a project that was commissioned by 516Arts, a nonprofit art museum in Albuquerque, New Mexico. Participants can use a variety of media to create the moths, such as lithography letterpress, drawing or painting. After announcing the project on social media, Lorenz went to bed, not sure what to expect. The next day, she received over 200 messages from people who said they wanted to participate. Since then, the project has been flying high with over 20,000 submissions to date from people in 26 countries.

Lorenz said that when she was choosing the subject for her exhibition, she knew she wanted to work with moths. She first envisioned a moth feeding — originally planning to include bear-eating moths — that elicits feelings of the night and creepiness. However, as a larger concept, she wanted to focus on cross-pollination, both literally, as moths are important pollinators, and metaphorically between the sciences and the arts.

Since then, the vision has changed a little. The original concept was dropped, and Lorenz has emphasized cross-pollination not only across disciplines but throughout the world, as it creates smaller communities of people who have come together to participate.

“I learned to just step aside and let it evolve,” Lorenz said. “And that was the best thing I ever could’ve done.”

When Pamela Drix, lecturer in the Department of Art, was looking up other projects outside of the college for her students to participate in, she found Lorenz’s Moth Migration Project and wanted her class to participate. Drix said the project would allow students to advance their printmaking abilities in a unique and challenging way.

One of the students in the course, sophomore Sophie Becraft, said that working under a deadline helped her to produce her best work, but it was difficult for her to get the perfect amount of ink when printing the image. Another student, senior Matthew Palmeri, also noted that working with polyester plates was a learning experience for him that took time. Luckily, he was able to pick up the technique and work through the problem effectively.

Drix said that despite the challenges, allowing students to be a part of a larger story with its own narrative — especially an international one — was very enticing to her.

Palmeri said he thought this project was important especially because it allowed him to engage with other artists in one piece.

“I know mine will probably be indistinguishable from everyone else’s,” Palmeri said. “Your voice is being entered into the mix, but it might not be one people can recognize or pick out, but you’re still present.”

Becraft also said she was excited when she first heard the class would participate in the project. Beraft said she is a huge fan of any insect with wings so creating moths was the perfect way to continue practicing her abilities and to work with intricate and detailed designs. She also said she was excited about the international aspect of the work because it was her first time exhibiting her art on that scale, so she worked especially hard to produce her best work.

“This artist creating the exhibit also was putting their trust in our hands, which was something that I really respected and wanted to honor,” Becraft said.

Lorenz said one of the best parts of creating this exhibit was the community building. In her own life, she has been able to create a community by holding “Moth Migration Socials” where five or six people gather in a place — often her home, but sometimes a gallery or a school — and carve moths together. The people who show up have been friends, friends of friends, or complete strangers who just wanted to contribute to her project but didn’t know how to print.

Lorenz said she has heard from a variety of families, colleges and elementary schools that have integrated her project into their curriculum and community centers. She said the project hasn’t only been used to teach art and design — for basics like color and line value or more advanced printmaking assignments like on the college’s campus — but also in science classrooms and STEM programs.

“It became this tool that teachers could use to help teach a number of lessons on the environment, and that became super exciting to me,” Lorenz said.

Palmeri said that after researching moths and creating his own, he had a much greater understanding of the environment and his impact. He said he hadn’t considered humans’ effects on things like insect migration patterns.

“We’re displacing and affecting these groups of insects without thinking about our impact on the environment,” Palmeri said. “As students, we have a lot of power when it comes to art that we choose to make and how we choose to engage people in our work.”