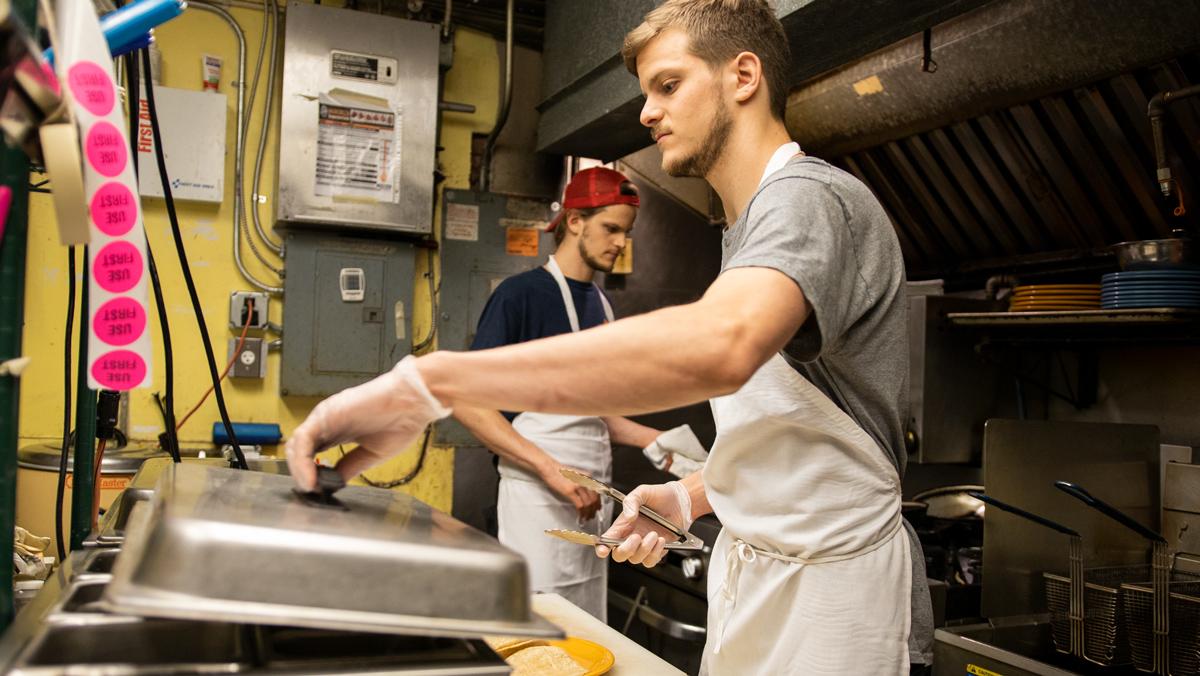 Reed Freeman/The Ithacan
From left, twins Kevin and Corey Adelman prepare food in the kitchen of their restaurant, Bickering Twins. The restaurant has been open since 2017.
By Brontë Cook — Opinion Editor
Published: December 11, 2019

When Kevin Adelman enrolled at Ithaca College in 2010, he did not have much experience with cooking. Now, nearly a decade later, he and his twin brother, Corey, spend nearly every night making specialty tacos for customers at Bickering Twins, a Latin American bar and restaurant they founded on The Commons.

Since the restaurant’s doors opened in 2017, Bickering Twins has gained a local reputation for its creative cocktails and funky taco fillings, which include braised beef tongue, roasted pineapple and slow-cooked beef-cheek. But the owners said the restaurant has also had its fair share of challenges.

“Everything that could go wrong has gone wrong,” Kevin said. “Like going a whole night without a dishwasher, major equipment breaking, small fires — crazy, stupid things you couldn’t really ever imagine.”

When Corey and Kevin first embarked on their journey into the culinary world, they knew it would not be easy. But they also knew that it would allow them to build a career around their passions: food, fun and Latin American culture.

Kevin first gained a passion for Latin American culture when he studied abroad in Bolivia during college. He ended up loving it so much that he lived there on and off for two years. He said that when he came back to the United States, he was missing a relationship with South America.

“I wanted to be connected,” he said. “I couldn’t really find a way to do it at first.”

Around the same time, he was also looking for a job. Despite his limited culinary experience, he found one in the kitchen of a local restaurant. From there, he worked his way up in the industry. In 2015, Corey joined him in Ithaca, and the two raised the idea of starting a catering, pop-up and vending company. This was the beginning of what would become Bickering Twins.

“We were looking for a concept,” Kevin said. “And, like I said, I was always looking for something to draw back to Latin America, so we started with Pan-Latin food.”

Using the culinary skills they had obtained at previous jobs, the brothers dove right in. They did their research and learned how to make food from many different regions in Latin America before narrowing their focus to Mexican cuisine, specifically. Their menu includes enchiladas, chicken mole and a variety of creative taco plates.

“We had been reading a lot of interesting Mexican cookbooks,” Kevin said. “You can get your hands on almost all the ingredients, even obscure ones, because of the large Mexican population in the country. So we started getting things like avocado leaves, all kinds of chilies and Mexican chocolate.”

The brothers also did research to make sure their food genuinely represented the cuisine of Mexico.

“We really shy away from using the word ‘authentic,’” Kevin said. “But we try to make our flavors the flavors that you would find in Mexico by using those ingredients and doing it the way that people have done it forever.”

In 2017, the brothers began selling their food at the Ithaca Farmers Market. They said it was there that they really began to feel the impact of Bickering Twins’ presence in the community.

“The word community is thrown around so much, but that’s when I really felt a sense of community,” Corey said. “It was really cool to meet farmers and other cooks and food vendors. There’s a younger generation of people cooking and making crafts and everything — we met a lot of them at the farmers market.”

Around that time, they held their first pop-up at Lincoln Street Diner in Fall Creek. Soon after, their pop-up expanded to The Carriage House in Collegetown.

The following year, Bickering Twins on The Commons was born. The restaurant is located on N Cayuga Street.

“We just took a big leap when we opened the brick and mortar,” Corey said. “There was a certain amount of fear in doing it,” Corey said. “Like, ‘Are we too young?’ or ‘Is it the right time?’ I was afraid of the unknown. I just knew it was going to be hard.”

Corey was right about it being hard, but luckily, they also had some help. Laura Phillips, a server and front of house supervisor at the restaurant, had been with the brothers since they opened their second pop-up. When they opened their location on The Commons, she took on a managerial role.

“I helped with some of the more physical aspects — hiring staff, interviewing people, setting things up so that we could open,” Phillips said. “I’ve been with them ever since.”

Even with the help of a small team, the brothers said, opening the restaurant came with a number of challenges, like maintaining staff members and learning how to negotiate rent deals.

“Everything in the restaurant operation is very delicate, and you need a system for literally everything,” Kevin said. “You need to have everything thought out down to the smallest details, and when you first open you can’t really have that.”

Corey said that while this can be frustrating, it is also part of what makes the restaurant business so much fun.

“It’s scary when you feel like things are on the edge of falling apart,” Corey said. “But that’s what keeps it exciting. We thrive on stimulation. Here, there’s an endless an endless supply of that.”

Now, two years later, the risks seem to have paid off.

Phillips said seeing regulars who visit the restaurant is one of her favorite parts of the job, and she does her best to make sure they feel appreciated. She said she does this is by making a point to remember their previous orders and recommending new items on the menu.

“The atmosphere you create in a restaurant counts probably as much the food counts,” she said. “So if you’re creating an atmosphere where people feel noticed and comfortable, that’s really important.”

Corey said this atmosphere is what really makes the restaurant special. Not just for the customers, but for the staff, too.

“You see a lot of familiar faces over and over again, and I really like that,” he says. “ It really makes it feel like home.”

While some students stumble home after a Friday or Saturday night out, others are working into the early hours of the weekend. Contributing Writer Brittany Gilpin discovers what it’s like to work the counter at Sammy’s Pizzeria at 1 a.m. It’s shortly after midnight, and the presence and chatter of college students on The Commons…

A night in the life: Late-night cravings

Michael Turback, an established author with years of experience in the restaurant business, recently published “All the Gin Joints: New Spins on Gin from America’s Best Bars,” a book about one of the nation’s most timeless liqueurs and how bars and restaurants around the country are moving beyond the typical gin and tonic.

Take one part student lounge, one part high-end café, add a dash of dessert, late night hours and the best view in Ithaca to create the successful recipe of tc lounge — the newest late-night hotspot on the Ithaca College campus.