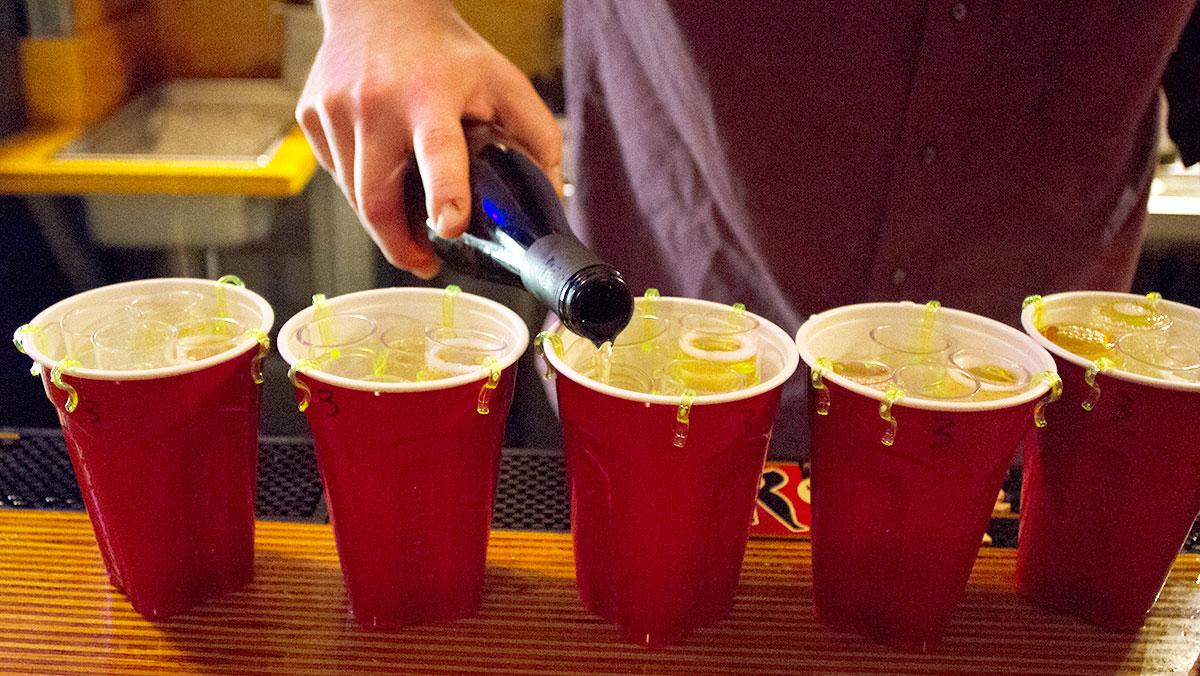 It’s Friday night at the Cellar d’Or and, along with the softyellow light spilling onto The Commons, the sounds of laughter and clinking glasses drift through the open door. Inside, the kickoff party for the Finger Lakes Region’s third annual Cider Week is underway, and the star of the event is a seasonal staple of upstate New York: hard apple cider.

From Oct. 3–12, the Finger Lakes Cider Alliance has organized an event for every day, involving dozens of local cideries and businesses, aiming to promote the local hard cider market and educate the public about apple cider.

Mark Grimaldi, owner of the Cellar d’Or, a wine and cider shop on The Commons, said most people don’t appreciate apple cider beyond the bottles of corporate manufacturers. His business is dedicated to making local cideries and wineries more accessible in addition to carrying fine ciders from all over the world.

“The best ciders are nothing but yeast and apples,” Grimaldi said. “Most American ciders add sugar just to boost the alcohol content, and that’s not real cider.”

By holding events like fine cider tastings and cider pairing dinners, Grimaldi said Cider Week aims to get people thinking about cider as more of a specialty drink. It also emphasizes the historical and cultural importance of cider, especially in the Finger Lakes Region, he said.

“Hard cider was the most consumed drink before Prohibition,” Grimaldi said. “Most people don’t know real cider like it was made hundreds of years ago, so we want to change that.”

“We meet and collaborate on projects that help raise awareness about locally produced cider, as well as projects that have to do with making better cider or learning more about cider-making techniques,” Stoscheck said.

Steve Selin is also a member of the Finger Lakes Cider Alliance, and owns South Hill Cider, a business in Ithaca that harvests from abandoned orchards and fallow lands to make traditional ciders. Selin said one of the most important aspects of cider week is letting people know exactly where cider comes from.

“Hard cider is really an orchard-based drink, and there are a number of high-quality cider producers in the Finger Lakes Region that are making it,” Selin said. “There are also a lot of abandoned orchards and wild apple trees, and they are very useful in making cider, because they really have much stronger flavors than apples you would typically eat.”

“In time, we will become known as a world-class cider-producing region,” Stoscheck said. “In some ways, some people from other parts of the country already know that, but local people haven’t really looked around to see what’s happening. Cider Week is a way to lay it all out in front of them so people don’t have to search anymore.”

Stoscheck said Cider Week gives cider connoisseurs and apple amateurs alike the opportunity to experience hard cider as a part of the culture and tradition of the Finger Lakes Region.

“We have a real gem here in the Finger Lakes,” Stoscheck said. “Cider Week is this amazing opportunity where everywhere you turn there’s more to learn, and you can really immerse yourself.”