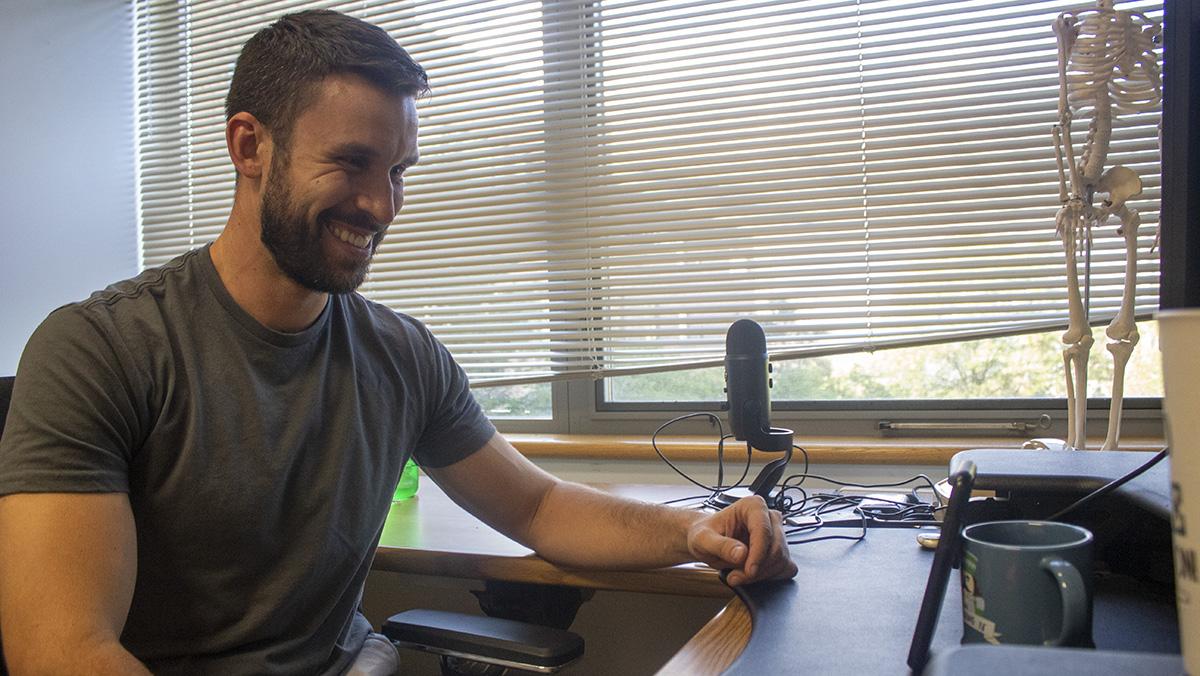 Imagine scrolling through TikTok to review metacarpals, phalanges and the pulmonary trunk before class. Tim Reynolds, assistant professor in the Ithaca College Department of Exercise Science and Athletic Training, started a TikTok account for his students to do just that.

Reynolds said he started his TikTok account because some of his students last semester thought that his dad jokes during class needed their own platform. After some persuading, Reynolds started posting on TikTok in March 2022, gaining a following of more than 400,000 people as of September 2022. He started with his anatomy dad jokes and has since then moved on to anatomy quizzes.

Reynolds is not the only professor at the college to take advantage of TikTok. Peter Johanns, associate professor in the Department of Media Arts, Sciences, and Studies, also has a TikTok account, which he uses to highlight different talent positions available through social media.

According to Interfolio, TikTok has become a popular app for educators to incorporate into their lesson plans to spread knowledge through a new creative outlet. Many professors use the hashtag #ProfessorsOfTikTok.

“If I could present content in a way that would be absorbed by the students, on a platform that they’re probably on more so than other platforms, that would be a success,” Reynolds said. “I think traditional teaching styles have to be adapted to today’s culture, especially post-pandemic models that have to be slightly different than pre-pandemic models.”

Senior Brianna Weiner is an occupational therapy major and said she had Reynolds for two of her classes.

“My initial reaction to his TikTok was, ‘oh my goodness, this is embarrassing,’” Weiner said. “But honestly, professor Reynolds is a very dedicated and committed professor who is exceedingly eager to make the learning environment work for all his students. So the more I sat on this idea of a TikTok account to inspire learning, it didn’t [come as] a shock at all.”

Weiner said that because TikTok has had a large influence over her generation, incorporating the platform into her education has only been beneficial.

“As someone who is always on their phone either for pleasure or for school, adding a fun way to actively learn on your own time is 100% useful,” Weiner said. “I really enjoyed using this new platform for learning, it made learning this challenging material fun!”

Weiner said she would like to see other professors incorporate the platform into their teaching strategy.

“Instead of spending all night with your head in the textbooks, why not adapt to the social norms of the media and take advantage of possible educational platforms that exist,” Weiner said.

Fifth-year physical therapy student Emilee Murray said she had Reynolds as a professor for her anatomy class before he started creating his TikToks. Despite this, she said she still watches them to review for her practicals and tests.

“I’ll have anatomy questions pop up and I’ll need a quick reminder on certain body regions and I thought it was super helpful because he posted TikToks with dances and different sayings that he taught us in class and it was really nice being able to go watch those when I needed to remember some of the anatomy,” Murray said.

Reynolds said he loves posting TikToks, but posting them has been quite a learning curve for him.

“I don’t have social media or communications training background in terms of my education,” Reynolds said. “I’ve learned a lot, which is interesting, in terms of the TikTok algorithms and what hits and what doesn’t hit.”

Reynold’s followers on his channel consist of many students and faculty from the college, but the majority of his followers come from outside the college. He said that he has gained crucial support from his followers.

“I have gained some really loyal followers and they’ll comment on every video,” Reynolds said. “Many people were really appreciative. People are also really mean on social media. So it’s one of those things trying to, like, navigate that and learning how to embrace the positive and just deflect the negative. But the idea of having the chance to have your teaching style, philosophies or approaches to things be shared, and be received well, has been reinforcing.”

Because of his large following, he now feels as though there is added pressure to produce good content.

“There is an expectation of content production that I feel for myself,” Reynolds said. “There are times when I have to come into campus and just film tech talks. Because you got to make content.”

Although Reynolds is still learning some ins and outs, his following has grown quickly and he has long term goals for his platform.

“If you asked me six months ago that I would have 380,000 people following me, I would say, that sounds like a lot,” Reynolds said. “Now I actually have the opportunity to see exponential growth opportunities. I would expect in the next two months to be at half a million followers. I don’t think that’s an unreasonable expectation.”

Katie Krom can be reached at kkrom@ithaca.edu