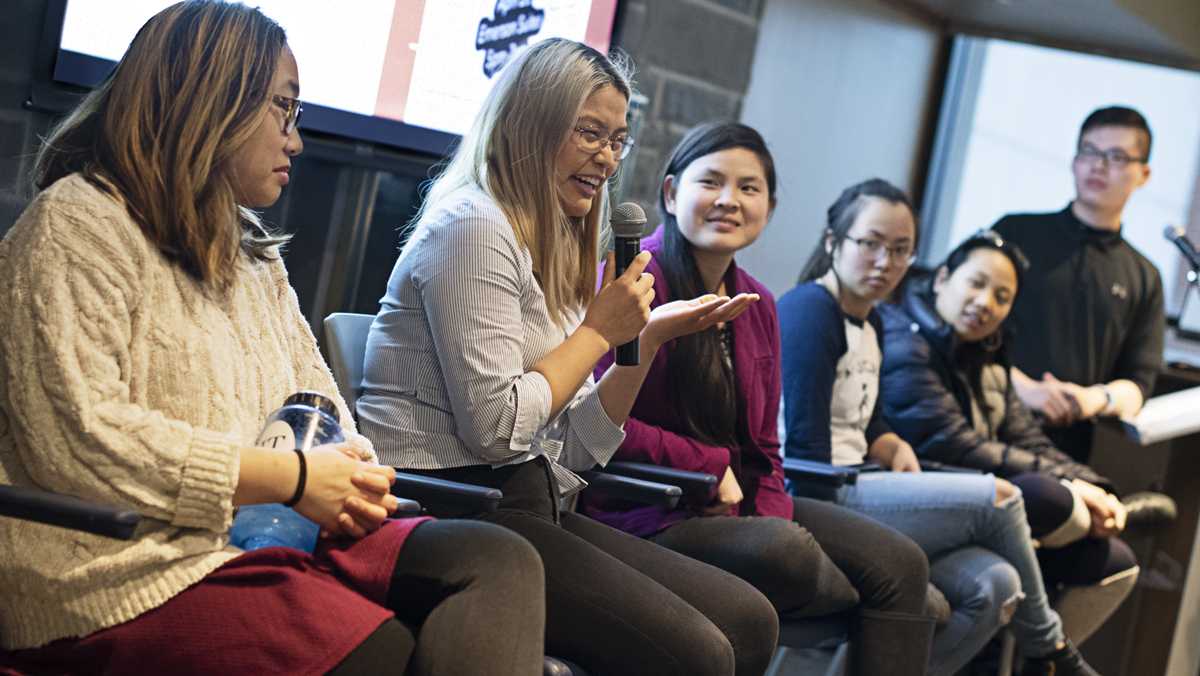 During the month of April, students of Asian and Pacific Islander heritage are celebrating their identities.

On April 5, students gathered in Klingenstein Lounge to listen to panelists talk about their Asian-American identities and how they are impacted by their experiences as adoptees. This panel was held by Ithaca College’s Asian American Alliance (AAA), a student-run, cultural organization, as part of its annual Focus Asia Month (FAM). There are six events as part of the monthlong celebration of Asian and Asian-American identity, senior Jung Chen Kuo, president of AAA, said.

Two events — the panel on adoptee identity and “Tai Chi Night” — took place in the first week of April, and the other four will occur throughout the rest of the month. “Kimbap Night” — an instructional cooking event where attendees will learn how to cook kimbap, a traditional Korean dish — will be from 6 to 8 p.m. April 11 in Room 111 in the Dorothy D. and Roy H. Park Center for Business and Sustainable Enterprise. From 5 to 7 p.m. April 17, spoken-word poet Alex Luu will be in IC Square, and from 7:15 to 8:30 p.m. April 25, the event “Liminal Spaces: Ritual as Practice” will be held in Muller Chapel. It is a discussion-based event about cultural practices surrounding death and grieving in Asian cultures, Kuo said. He said FAM will end with “Asia Night,” a celebration that will consist of performances, themed activities and food. It will be held from 5 to 7 p.m. April 26 in the Emerson Suites.

Kuo said FAM events are primarily hosted by AAA, but it has collaborated with other groups in the past. He said that this year, AAA worked with the Center for Inclusion, Diversity, Equity and Social Change (IDEAS), which held two of the events, including “Tai Chi Night.”

FAM events provide a space for Asian and Asian-American students to have their cultures accepted while also being a space for others to learn more about Asian identities, an aim that is important to AAA, Kuo said.

“FAM is a monthlong celebration with different goals during each event to educate and support our mission as an organization while also highlighting the Asian-American experience here on campus,” he said.

Every year, AAA holds a panel at the beginning of FAM about different aspects of the Asian-American experience, Kuo said.

This year, the panel was about adoptee identity and how it intersects with Asian-American identity. The panel was composed of four students and one alum, juniors Maggie Mowrer and Rebecca Hall, sophomores Katelyn Monaco and Siena Howenstein, and Zihui Adams ’18. The panelists discussed how their Asian-American identities have been impacted by the fact that they were adopted transracially from Asia into white families.

Mowrer said that growing up with white parents, she couldn’t relate to other Asian kids because their experiences in Asian households were different. She said her Asian identity didn’t feel important because of her upbringing.

However, Mowrer said that when she came to college, her Asian identity became more important to her.

“I realized that even though I didn’t grow up with those cultural touchpoints, there’s a lot of parts about being Asian that you can’t really erase even if you don’t grow up in a specific way because of how people treat you,” she said.

Adams said she wanted to participate on the panel because her adoptee identity is important to her and she wanted to be a resource for others to learn more.

“I think a lot of the times it’s a story that people don’t know a lot about and they’re worried about how to, kind of, approach the topic,” she said. “And I’m kind of an open book in that sense, and so I thought it would be good to share my story.”

“I’ve been exposed to other adoptees most of my life — I have a lot of adopted friends — but I haven’t really been in an environment that’s educational,” she said.

Kuo said he encourages non-Asians to attend FAM events too so that they can broaden their perspectives and support AAA and the Asian and Asian-American community at the college.

“We can do as much as we want to highlight the Asian experience here on campus, but it’s also important to have allies … who can help us bring our voices out and let people know about AAA and about FAM,” he said.