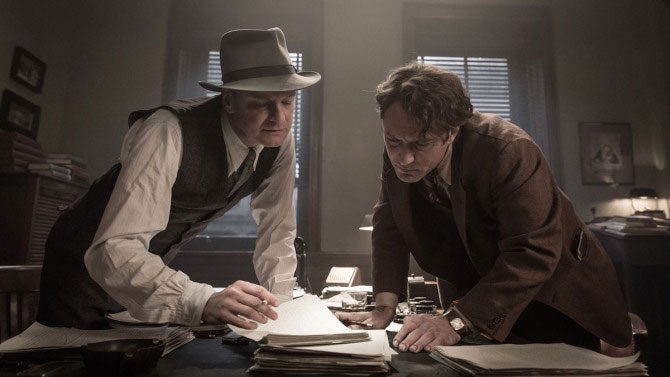 On its surface, “Genius” follows the formula of popular, critically-acclaimed biopics of the past few years. Like “The King’s Speech” (2010), “The Imitation Game” (2014) and “The Theory of Everything” (2014), it’s a little-known story about a 20th century figure who made great and controversial contributions to history. It has a mostly-British, A-lister cast, including Colin Firth at the helm. It’s based on a well-received biography: “Maxwell Perkins: Editor of Genius” by A. Scott Berg. It’s set in the early 30’s, with nods to other famous figures of the time. But, for all these hypothetical benefits, something about “Genius” is a little less than its name.

Firth’s character, Maxwell Perkins, is an editor for Charles Scribner’s Son, the company who worked with the likes of F. Scott Fitzgerald (Guy Pearce) and Ernest Hemingway (Dominic West) to publish their first major works. The film focuses on Perkins’ tumultuous relationship with Thomas Wolfe (Jude Law), an explosive personality and prolific writer.

While the pair works well together at first, by the end of the film Wolfe is starting to question whether Perkins helped or hindered his voice. Perkins asks the question that keeps him up at night: “Are [editors] really making books better? Or just making them different?”

For a story film that is entirely about the process of change in art, “Genius” is also lacking in clear and intriguing character development. With the exception of Wolfe himself, whose realization and rejection of his selfishly wild lifestyle come too late — literally, in the last five minutes of the film, penned in a deathbed letter to Perkins — the cast is pretty much stagnant. This is, of course, a serious problem in any story, but is even less excusable since the characters in the film are constantly referencing how much Wolfe has changed them. His lover, Aline Bernstein (Nicole Kidman), warns Perkins that once Wolfe inevitably leaves him, life will no longer be worth living. Perkins’ wife, Louise (Laura Linney), rails him for abandoning their five daughters in pursuit of literary excellence with Wolfe. Although these characters tell us change is happening, the viewers never see it for themselves. This isn’t due to poor acting as much as it is to a mediocre script and Michael Grandage’s heavy-handed directing style.

The film is pretty to look at, but not interesting to watch. It never feels as though every moment is essential, as if every frame is supporting the film’s thesis. Ironically, what “Genius” needs is a good editor, an outside eye to trim the fat of excessively flashy production value and mine down to the characters who drive the story and the excellent cast hired to portray them. In fact, the creative team could have taken their own story’s advice. Perkins might have, at the very least, made the same suggestion to them that he makes to Wolfe in the film: “Consider a new title.”

With such a strong cast and an objective story, “Genius” could have been so much better than it is. While it manages to make one of life’s least cinematic activities easy on the eyes, the movie’s lack of depth and character development ultimately fails to represent the fundamental change the process of editing presents.