Originally penned as a novella in 18th-century France, “Candide” has stood the test of time again and again. Now, the theatrical version will be performed in Ithaca with Ithaca College students, alumni and staff at center stage.

Written by the philosopher and playwright Voltaire, “Candide” tells the story of main character Candide’s life and the array of characters who influence him throughout his worldly journey. The work has been rewritten as an operetta several times over the years, one instance of which was dubbed the “Chelsea version” in 1973, which was revived by Harold Prince, written by Hugh Wheeler and composed by Leonard Bernstein with lyrics by Richard Wilbur.

This version will make its Ithaca debut at 8 p.m. Sept. 16 and will be performed again at 8 p.m. Sept. 17 and at 2 p.m. Sept. 18 at the Hangar Theatre. “Candide” was previously performed in town during the spring of 2000 by the same theater group, Savoyards Musical Theatre, a group that comprises students and staff from Cornell University and Ithaca College, as well as community members from Ithaca and the Finger Lakes region. 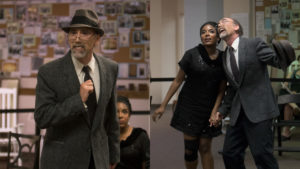 The current production team decided to perform the same play version of the musical that was done in 2000 for an early fall show. Stage director Gary Moulsdale said that after finding out about the decision, he knew the Ithaca community would enjoy seeing it again.

“The company generally staged Gilbert and Sullivan musicals; however, [“Candide”] is a work that has not been heard in Ithaca with orchestra in over a decade,” Moulsdale said. “So I think this was part of the company’s wish to present this really beautiful, troubling, heartening work in the American mainstream from the ’60s.”

The company decided on hosting “Candide” in the Hangar Theatre after construction prevented it from using its typical space, the Schwartz Center for Performing Arts at Cornell University.

Anthony DiRenzo, associate professor in the writing department at Ithaca College, who plays Voltaire as the narrator onstage, said the Hangar Theatre provides a more intimate setting for the performance and allows a greater connection to the audience due to the closeness of the stage.

“It is ideal for this type of show because … ‘Candide’ is a kind of intimate epic, and if you’ve been in the Hangar, it’s a peninsula stage, so you’re surrounded by the audience,” DiRenzo said. “There’s that ability to both have that personal connection, and at the same time, there’s that sense of scope. ‘Candide’ is all over the place … so rather than having scenery, it’s all wonderful costume and lighting changes — that’s how you’re going to get that there. The Hangar is the perfect space for that.”

Moulsdale said many pieces from the musical have independently risen to fame in the theater community over time. Pieces such as “Glitter and be Gay” and “Make Our Garden Grow” have become well-known for their musicality and underlying messages, and are often sung by choruses. Moulsdale said learning more about all of the works has been a welcome struggle for both himself and the entire cast.

“What’s been part of the great fun for us has been to realize these great pieces of music within their theatrical context,” he said. “It’s been a great joy to see them in their home environment rather than as concert pieces, which often happens.”

Orchestra director and conductor Keehun Nam is a graduate student studying conducting at the college. He said he has conducted for operas in the past, but never for a musical before “Candide.” While there are differences between what is required of him for each type of show, he said operas and musicals come with their own sets of challenges to adapt to, which makes it difficult to prefer one piece over the other. With this musical, the orchestra is mainly composed of current students from the college. Nam said these students bring a professional attitude he normally would not expect from college-level musicians.

“They come early, and they’re prepared, and they’re not winging it, and I’ve been very impressed with the culture here of being professional,” he said. “You can’t expect that at many or most colleges in the U.S. based on my experiences. It’s been a lot of fun. We’ve gotten to know each other now, and a lot of them are my friends from the graduate program, and it’s been nothing but a blast.”

The rehearsal process began as soon as students were allowed to move back onto campus mid-August. DiRenzo said Moulsdale employed a new method of rehearsing called ‘rasaboxes,’ which he adapted by drawing from Hindu theater and culture. This method allows performers to mentally enter a space and draw on one of eight emotions, which they then channel onstage.

“In Western theater there’s this great big gap between audience and performer,” DiRenzo said. “You do it, and you perform ‘for,’ whereas, with classical Indian theater, the idea is you’re presenting something for the audience to taste. ‘Rasa’ is a word that means ‘essence’ or ‘taste,’ and the idea is you embody the feeling in a way that you try it out and then give it to the audience for them to taste.”

He said by having the actors engage in this practice, Moulsdale created a greater connection between the audience and the characters. Many of the actors were able to further tap into their fictional personalities in a way DiRenzo said he has never seen or done before.

The story of “Candide” presents a few challenges for its performance. The characters travel the world throughout the story, leading to many set changes as well as the discussion of sensitive topics, such as racism and religious bigotry. Later on in the musical, the female protagonist is revealed to be a rape survivor who later becomes a sex worker. He said performers involved with “Candide” are often wary of how the audience might associate the production company with these themes, but that is not so.

In a director’s note, titled “A Word About Race, Religion and Violence in ‘Candide,’” Moulsdale said, “What it does is something brave and very different: It brings this world to the stage as the wide-eyed Candide encounters it. Candide does this so we can watch his first philosophy falter in the face of ‘this hateful world,’ and so we can see him recognize the wisdom of another way when fate drops it into his hands.”

Nam said working with the cast on this show has been an unforgettable experience for him. His first night in Ithaca was also the first rehearsal for “Candide.” He said he was floored by how amazing the chorus and cast had sounded with over a month left before opening night. Since then, he said, rehearsals have been getting better and he can’t wait to see what the audience will take away from the performance.

“The one thing I hope everyone walks away with is that you don’t have to be a big, expensive production or company to move people and to put out high-quality work,” Nam said. “I want people to be moved, and I want people to know how strong the theater and arts community is. I don’t want to influence how people think of the show, but I want them to enjoy it.”

The story has been modified to reflect the following: The article previously stated that the Chelsea version was revived in 1973 by Hugh Wheeler. However, it was revived by Harold Prince and written by Wheeler.