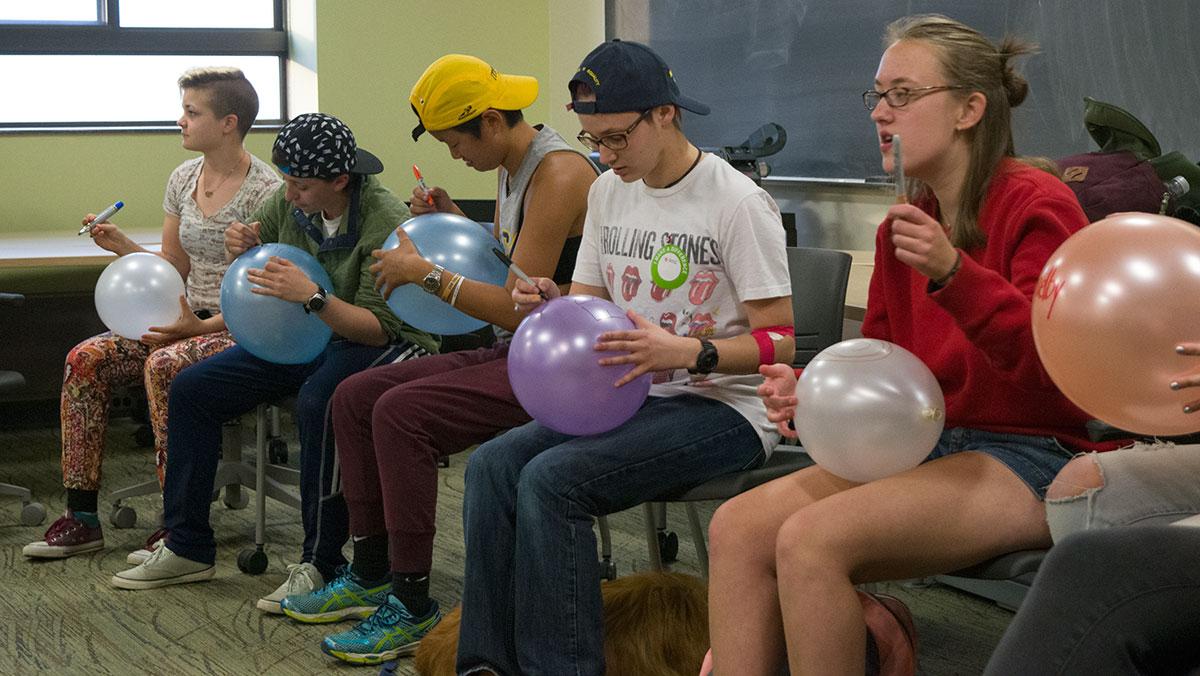 A weeklong series of events called IC Color has been celebrating the spectrum of identities that make up the Ithaca College campus.

Scheduled for April 17–22, these events have focused on underrepresented groups on campus, with each day’s events centering around a particular group. April 17 began the week with an all-inclusive kick-off concert. April 18 was dedicated to the topic of mental health and disabilities; April 19 focused on the lesbian, gay, bisexual and transgender community; April 20 was centered on self-identity and the ways people view themselves and the greater campus community; Thursday is dedicated to people of color; and events April 22 focus on the issue of feminism.

“I really wanted to give voice to all of the different marginalized communities on our campus and have an intersectionality be introduced,” she said.

“It’s all of us,” read the first slide of Paul Mikowski’s presentation, which highlighted several statistics that shed light on the all-encompassing and nondiscriminatory qualities of mental illness. Mikowski, a Counseling and Psychological Services counselor, cited a study that said nine out of 10 of Ithaca College students feel overwhelmed by their daily obligations.

“This age and this environment has a lot of stress, so symptoms are more likely to come out or get more severe,” Mikowski said.

Led by Mikowski at 10 a.m. April 18 in the Clark Lounge, the presentation “Reducing the Stigma of Mental Health” offered students free-form discussion to ask Mikowski questions and share their own relationships with mental illness.

“The point is, we need to humanize these stereotypes,” Mikowski said. “Because I think that’s how we actually dispel stereotypes and prejudice, is by talking honestly.”

Sophomore Magdalyn Chauby said these conversations are important for reducing the stigma around mental health. For example, she said she is nervous about how people will react if she tells them she has social anxiety.

“If there is no open dialogue and if you don’t start a conversation, there can be no step forward,” Chauby said.

The Peggy R. Williams Difficult Dialogues Series from 6–9 p.m. in the Klingenstein Lounge was an open-floor art exhibition that used art to tackle difficult subjects such as campus rape and sexual assault.

News of the event was sent out via Intercom, and interested students were able to sign up by reaching out to Maura Stephens, associate director of the Park Center for Independent Media and the leader of the art exhibit team.

The exhibit featured art in many forms such as photographs, a sculpture, a documentary, a short film and a spoken word piece.

Freshman Anna Gardner, a dual major in film, photography and visual arts and art history, used photographs of a friend wearing different outfits — the everyday outfit, the office outfit and the party outfit — in a piece titled “Is She Asking For It?” In each photo, the woman had a red “x” over her face to symbolize that she is not a target.

“I wanted to combat assumptions that victims play a role in attracting sexual abuse,” Gardner said. “It doesn’t matter if she’s wearing the stereotypical party outfit or not.”

“Genderless: Breaking the Binary of Gender Expression HiFashion Gallery” was held from 9 a.m.–3 p.m. in the McDonald Lounge. It centered on gender binaries in the world of fashion. The gallery included photographs of five different models who were styled in distinct ways. While their makeup was similar, the models were then told to wear whatever they felt comfortable wearing and not necessarily according to a gender binary. The models each answered questions about how they see themselves and how they felt about gender-binary fashion. Their responses were hung along the walls of McDonald Lounge, along with their pictures.

McCall said she wants people to leave the event with a better understanding of themselves and others.

“I want people to be able to think about how they see themselves — to be able to look at these faces and see their faces and not just the clothes they are dressed in,” McCall said.

“Breaking Stereotypes,” which began at 7 p.m. in Williams Hall, was hosted by Spectrum, a student organization that discusses issues related to the LGBT community. This had a similar message to the previous event, which was that people are much more than the stereotypes that others place on them. The event featured a group activity in which people wrote their names on a balloon and then switched balloons with a partner they had never met before.

Freshman Lindsey Caliga attended the event and said the activity helped her get to know her peers better and taught her that society shouldn’t dictate who a person is.
“It was a really good event. I got to know a lot about people — things I might not have known,” Caliga said. “It really makes us think about our assumptions and what society’s stereotypes have put into our brains.”

Conversations with Public Safety: 5–7 p.m. in the Rec Room

Pathways Workshop with Dr. Paul Mikowski: 4–5:30 p.m. in the VIP Room in the Athletics & Events Center

“The Large Minority” Forum Theater Performance: 7 p.m. in Studio 1 in the Dillingham Center