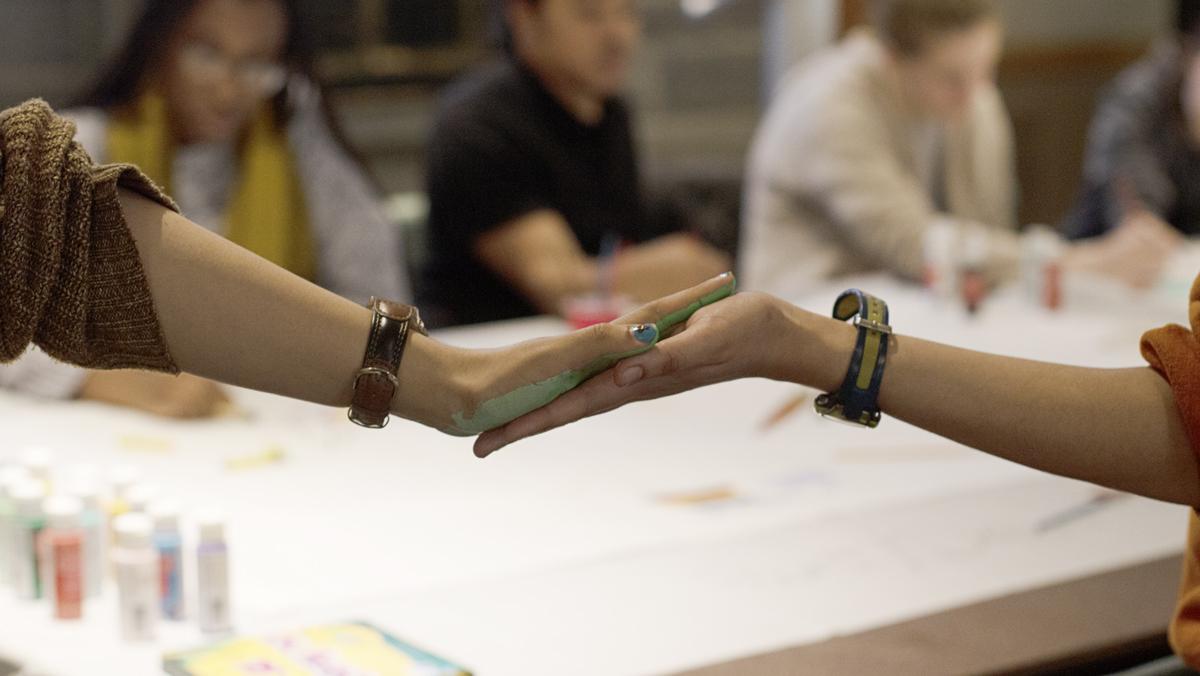 Abbey London/The Ithacan
IC Mixed brought artists together to express their identity through creativity. The event was one of many other Black History Month festivities at the college.
By Olivia Riggio
Published: February 20, 2019

Some students sit at a table in the center of the Campus Center’s Klingenstein Lounge, doodling on a large sheet of paper with paint and pastels. Others wander around the room, looking at vibrant visuals and poetry. All of these pieces, from the quilt displayed on a table, to the pop art collages on the room dividers, were made by students and community members of color.

IC Mixed hosted the Black History Month Collaborative Art Showcase from 6 to 8 p.m. Feb. 18. The exhibit aimed to celebrate artists of color on campus and in the community.

The event showcased a variety of art forms, consisting of paintings, drawings, crafts and poetry. The club also provided large pieces of paper and art supplies for attendees to contribute to a collaborative creation.

IC Mixed is an organization at Ithaca College dedicated to strengthening the community of those on campus who identify as mixed, multiracial or come from multiracial backgrounds. Senior Rowan Larkin, president of IC Mixed, said the group has been wanting to host an event like this for some time.

Junior Serena Velazquez, vice president of IC Mixed, said this event was the first time IC Mixed held a collaborative art showcase. She said the group chose to invite attendees to create their own art so that they could participate in the exhibit in a way that was not strictly discussion-based. She also said the main goal of IC Mixed is to give a voice and space to those who are often shut out of conversations about race and identity.

“We all want to see mixed people, and people of color in general, in spaces that aren’t necessarily made for us on this campus, and I think that, predominantly, in any spaces that art is held in the Ithaca area, it’s very heavily populated by white artists,” Velazquez said. “We didn’t see a space were art by people of color is being celebrated in an intentional way.”

Velazquez said that even though the group is not made up entirely of students who identify as black, the group members found it important to take part in this month’s celebration of black history.

“We’re asserting that everyone should be celebrating Black History Month,” Velazquez said. “We don’t have race and ethnicity in common like a lot of student orgs for people of color on campus, so I think that it’s really important that even though we’re not made up entirely of black members, that we still celebrate Black History Month and that we’re still trying to hear the voices of black people and trying to celebrate art from people of color in general.”

Freshman Louis Bavaro, treasurer of IC Mixed, also said that taking part in Black History Month through this showcase was important to the group.

“There are still some of us who share culture and heritage similar to African Americans,” Bavaro said “The idea behind it was to pay tribute to what’s going on this month, in regards to the campus-wide celebration.”

Freshman Julia Bertussi attended the event to support the art produced by people she has worked with in IC HEARD. IC HEARD is a volunteer club at the college that provides creative arts outreach to incarcerated males who are 14–20 years old. Some of the art featured at the showcase was produced by residents of the MacCormick Secure Center, a juvenile detention facility in Brooktondale, New York. Betrussi said many of these residents are people of color.

“They deserve to have their voices heard and they deserve to be able to express themselves … and having their work exhibited like this is just a great way to do that,” she said.

Black history is commonly whitewashed and shrouded in euphemisms in white spaces. From remembering Dr. Martin Luther King’s fight for justice as a feel-good story about pacifism to believing racism is no longer a daily reality, white institutions often downplay people of color’s struggles. Larkin said that while Black History Month is a celebration, it is primarily a time for learning and reflecting on black history and how it applies to contemporary history.

“Black people, black history and black voices have always been and continue to be obscured and devalued in our culture,” Larkin said. “Black History Month is a yearly reminder for us to not only learn about the black history that was hidden from us growing up, but to understand how history influences what is happening to black Americans right now.”

Senior Gabrielle Watson attended the event and said she chose to go to the showcase because of her interest in art and its ability to express peoples’ lived realities.

“I feel, oftentimes, if you’re trying to get to know people, or even just try to build relationships or get along in the world, it’s important to understand other people, to understand their lives and what they’ve been through, and art is a good way to learn all of that,” Watson said.

For Velazquez, who had some of her own poetry displayed, art helped her express her struggles with her identity. She said she never had a chance to work on embracing her mixed heritage until her freshman year of college when she wrote the bulk of a poetry piece displayed at the showcase as part of a creative writing assignment.

“In some spaces, I am the most ethnic person there, I can be tokenized in so many ways, but in other spaces, I am just a white girl and that’s it,” Velazquez said.

Her poem consisted of two pieces of paper covered in capitalized handwriting in red and blue. The writing spelled out statements that encompassed Velazquez’s journey toward recognizing both her Latina and white identities. The text was blue and red to represent the colors of both the American and Puerto Rican flags. Some of the text included, “HOW TO NOT ACT TOO HISPANIC,” “HOW TO AVOID MIRRORS” and “HOW TO HONOR YOUR ANCESTORS.” She said the form of poetry she chose was inspired by a short story written by Jamaica Kincaid titled “Girl.” Kincaid’s piece similarly consists of episodic “how-to” statements.

“Basically, I would describe it as … a bunch of different statements that I’ve thought, that I’ve felt, compiled,” she said.

Bavaro said the celebration of Black History Month and IC Mixed’s Collaborative Art Showcase is about representation and celebrating people who are often ignored.

“It’s always cool to learn more about the history and culture of people who aren’t always celebrated for the color of their skin,” Bavaro said. “In terms of the art, it’s this sense of we celebrate black history, but also the unity that goes behind that.”