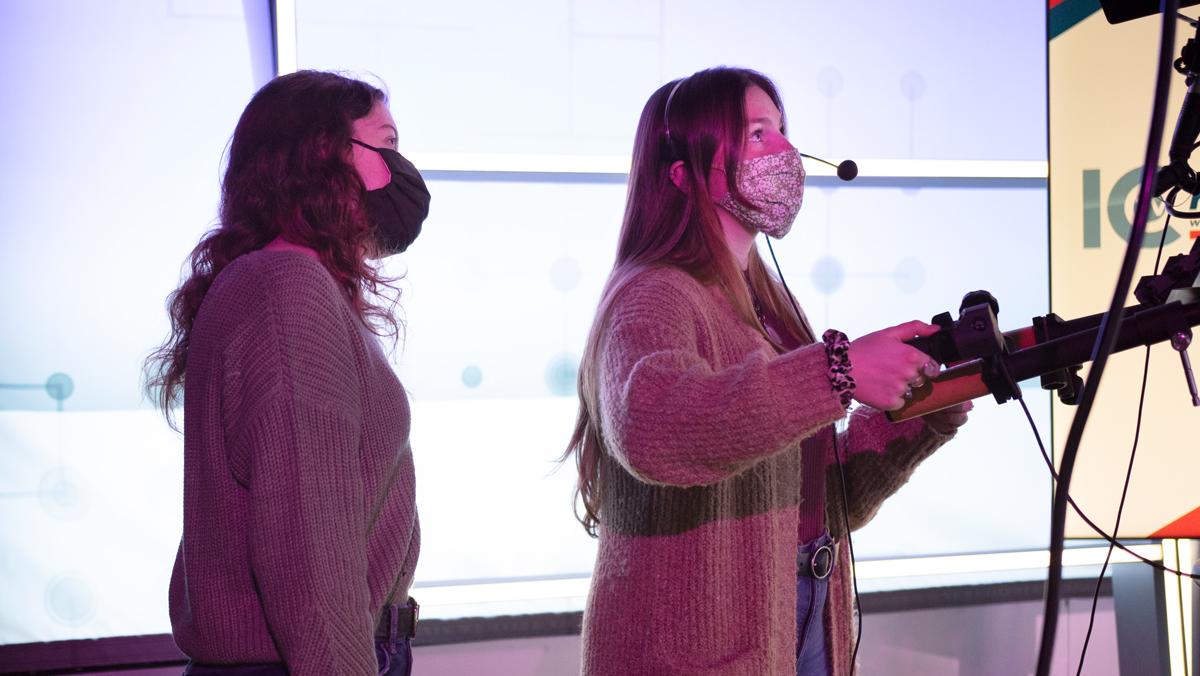 Last March, the studios of one of Ithaca College’s longest running programs, ICTV, were silent and empty. However, after nearly a year of remote production, the cast and crew have finally returned to the studio. This time, students are working with a slew of new COVID-19 guidelines, including reduced numbers of crew members, staggered schedules and increased equipment sanitization.

Senior Steven Blenner, ICTV’s station manager, has been involved with ICTV since his first year at Ithaca College. When the pandemic shut down ICTV indefinitely last March, Blenner was serving as both the master control supervisor and associate director of technical operations. He assumed the position of station manager last May, during the pandemic. Blenner said that this semester, ICTV has 22 shows in production, and all of the shows that needed studio time were able to get it. Two shows — “Good Day Ithaca” and “The Inside Scoop” — are being produced entirely virtually, while the other 20 have varying proportions of in-person and virtual production.

Blenner said one of his challenges is finding a way to consolidate the responsibilities of what used to be a large number of crew members into just a few. Additionally, Blenner said he has had to redistribute these responsibilities without overburdening the few members of the crew that remained. There is now a capacity limit of five to six crew members in the control rooms and studios. Blenner said he had merge roles, like reducing the number of camera operators from four to two — where there used to be one operator to a camera, there is now one person operating two cameras.

Blenner said he was also confronted with the dilemma of wanting the on-camera talent to wear masks while filming. However, this would alienate some viewers who are American Sign Language lip readers. So, Blenner allows the talent to take off their masks but only while filming.

“It’s just about making sure that we’re making these productions to where we want them but also being as safe as possible and following these guidelines,” Blenner said. “It’s something that we are working very hard to keep up to.”

Freshman Jacquelyn Chin, who managed the social media for ICTV’s game show “Fake Out” and worked as an assistant producer for ICTV’s news show “Newswatch” during Fall 2020, is ICTV’s director of on–air promotions this spring. Most freshmen who join ICTV are new to the elements of studio production. However, unlike her peers who are learning for the first time, Chin was fortunate enough to attend a high school with its own TV set. So, when Chin showed up to the studio in January, the studio environment was familiar to her. However, the reduced studio capacity that she was confronted with was unfamiliar.

“It is really different,” Chin said. “Normally I would know who is in the control room and be able to talk to them and then see what’s happening when I’m waiting and not in the studio in front of the cameras. It’s really weird because I haven’t set foot into the control room whatsoever because there’s already a lot of people in there for crew.”

Sophomore Hannah De Chalais has worked on ICTV’s satirical show “In Other Words” since her freshman year and is now an assistant producer. When the pandemic closed the college, “In Other Words” stopped production, De Chalais said. The show created a few episodes over Zoom by hosting writers rooms, sending out the scripts to the talent and having them record themselves delivering the lines. While ICTV was able to function in this way during the second half of Spring 2020 and in Fall 2020, De Chalais said part of the experience was being in the studio with friends, creating.

“I think people are just happy to be back in the studio,” De Chalais said. “It gets stressful sometimes, but I think overall a lot of people are just happy to still be able to get the experience that they want and need. It’s still a good time. The stress doesn’t outweigh the experience. We’re still learning to deal with these changes, and it’s a good experience. If this were ever to happen again in the future, we would know what to do.”

However, not all students have been able to go back into the studio. There are still many roles in ICTV that are done virtually, despite many students being back on campus.

Although sophomore Khami Auerbach is learning in person this semester, she said most of her work can be done virtually. Despite being the assistant producer for the sports show “Next Player Up” and an editor on the mockumentary show “A Piece of Art,” Auerbach said she hasn’t been on set yet this semester.

“I’m very torn about it,” Auerbach said. “Part of me is like, it is nice because I don’t really have to get up and move anywhere to do what I need to do. It’s all in front of me, which means less walking for me. … But I do kind of miss the energy of being in a studio or a set with people and being able to work with other people.”

The on–air talent has had a different experience. While senior Madison Moore is back in the studio as the anchor for “ICTV Reports with Madison Moore,” her time in the studio is limited. Due to concerns of COVID-19 transmission, Moore said the cast and crew try to get in and out of the studio as quickly as possible. Pre-production, like writing the script — which used to be done in person — has become virtual. The producers also create and print out shot lists for the cast and crew so that everyone in the studio can know and perform their role beforehand without congregating near one another. After filming, they discuss how the day went on Zoom.

“It’s just a bit of extra planning on our end and making it work and kind of rolling with the punches,” she said. “There were definitely a lot of things that when we got into the studio that we had to figure out how to do.”