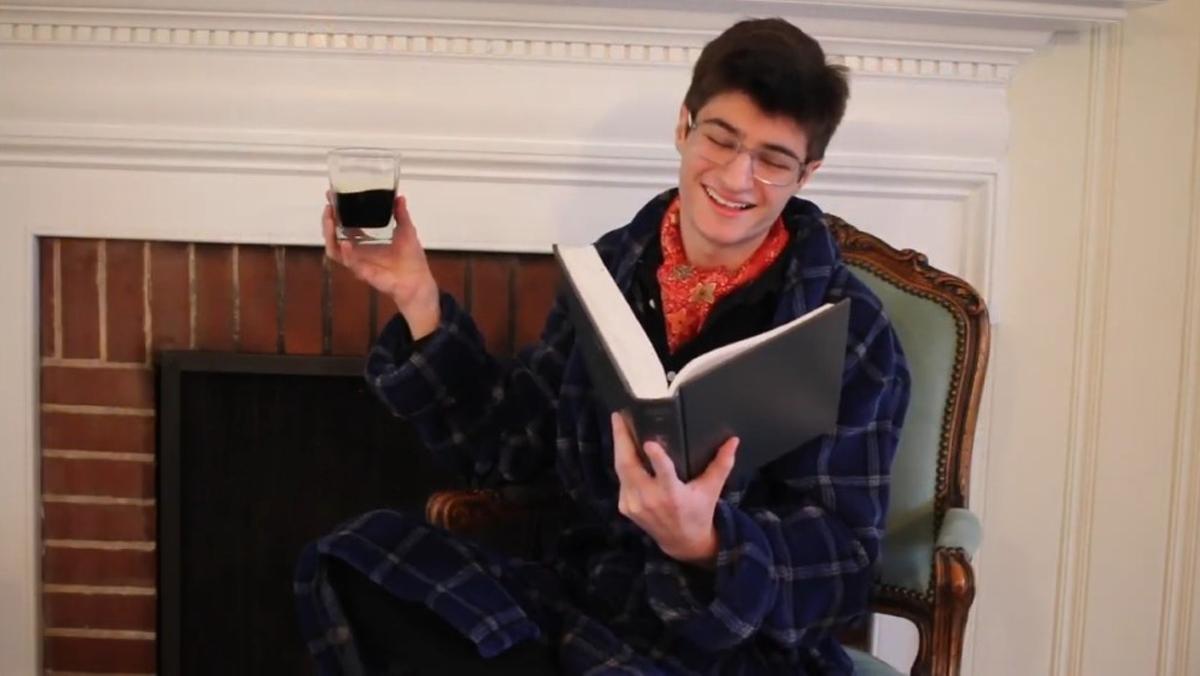 Courtesy of Brittney Cooper
Sophomore Jake Orloff introduces the student-created show “A Piece of Art” in a video recorded to tease the show and raise money for production.
By Katie Krom — Staff Writer
Published: February 10, 2021

With the COVID-19 pandemic transforming the process of television production, one group of Ithaca College students is adapting in the face of these challenges to create a feel-good comedy.

The new ICTV production, titled “A Piece of Art,” is a mockumentary that follows three high school artists — a cult-indoctrinated painter, a sellout actress and an uncoordinated fashion designer — as they compete for a scholarship to the University of Louisville. Sophomore Jake Orloff is the head writer for the production, along with sophomores Kyle Friedman and Brittney Cooper, who are producers.

Orloff said the group first met in their freshman orientation group in Fall 2019 with the same goal of creating a production. Soon after, they wrote a script for “A Piece of Art.”

Orloff said he has been a member of other ICTV shows, but felt that they didn’t have enough community for him.

“When I first joined an ICTV show my freshman year, it felt like a job that you were not getting paid for and you didn’t really get much out of it,” Orloff said. “That’s also why we wanted to create this show.”

To make their creation come to life, the students are attempting to raise $6,000 to fund equipment, props, location, food and safety gear. So far, the project has raised approximately $1,500. Due to COVID-19 protocols, the team has limited access to equipment from the Roy H. Park School of Communications. Friedman said ICTV provided the “A Piece of Art” team with $100, but this wasn’t enough for safety supplies for COVID-19, props, costumes or other expenses associated with production.

“A Piece of Art” will start filming on March 1. Orloff said the team will follow the New York State Guidelines for Film and Entertainment, as well as put a significant amount of their money towards cleaning supplies.

“We don’t want to pull a Tom Cruise, but we will if we have to,” Orloff said. “We’re missing a bunch of clubs and classes and we’re stuck in our dorms. We want to give people that opportunity to just do something related to film.”

Making safety a priority, the team has had to make adjustments to their script by taking out any unnecessary interactions. Orloff said that when filming, only 50% occupancy is allowed at every location and nine people in a room.

Friedman said the team has had to limit their filming locations, but they have been able to utilize some sets on campus. Friedman also said they purchased a bed and breakfast room with a bathroom to film in since they could not film in an on-campus bathroom.

Sophomore Alaysia Duncan became involved in the production after seeing posters and signs for the show in Fall 2019. Duncan plays the dramatic, bossy character, Virginia. She will be acting in the production in-person, and she believes that the crew is doing everything to stay safe.

“I think no matter what, it’s always going to be kind of [nerve-wracking] doing something during COVID,” Duncan said. “I am just going to do my best and be as safe as possible.”

Friedman said the goals of the production are to create an educational experience by having underclassmen working with upperclassmen, to build a community and have a fun and productive environment.

Duncan said this production is her first time being part of a large on-camera show, but working with upperclassmen has allowed it to go smoothly.

“The best part about a mix of ages is that you do get to learn a lot from upperclassmen,” Duncan said. “In general, they set a really good example of set etiquette and how to work together as a group. I definitely think that the upperclassmen help the underclassmen feel more welcome and that they are included in this space.”

Cooper said the students are excited to see what will come out of the show and most importantly, just want people to get a good laugh in.

“I hope people just have fun with it, it’s a comedy,” Cooper said. “If someone can laugh at least once, I’d find that quite enjoyable. If they laugh more, that is going to be amazing. Not even for the audience, but for the crew that is working on it. I hope they have fun and come out with a great experience, some learning experience.”