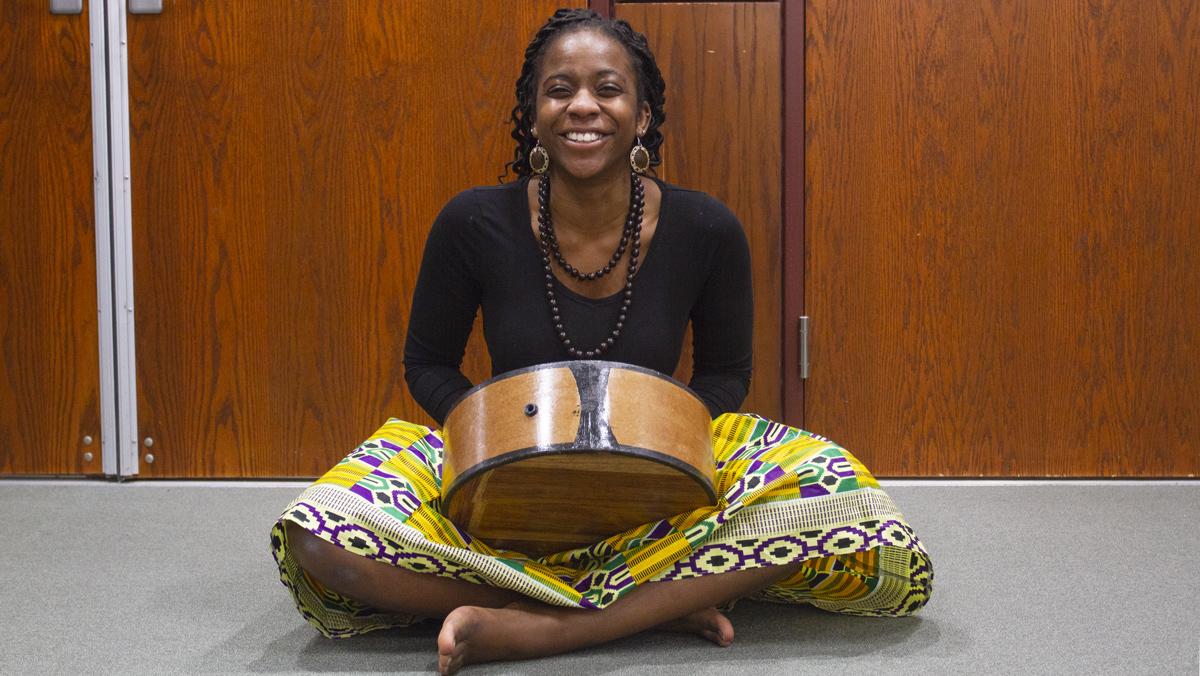 Arriving on campus in August after leaving her home in the bustling city of Mumbai, India, freshman Shreya Kadam walked around Ithaca College, feeling uneasy and wondering how to find her place and build connections in the college community.

“I was worried about how I would fit in and the whole friendship circles and everything, but otherwise I was pretty confident about it,” Kadam said. “There was that slight hesitation of whether people would like you or not, but I think that comes with going to a new place anyway.”

Kadam said she felt welcomed at the college despite her hesitation at the beginning of the school year. She joined the freshman class along with 40 other international students who helped her to transition and find a sense of home on campus.

“People here are more outgoing — back home, they are more reserved,” Kadam said. “I haven’t met one student that hasn’t made me feel welcomed as of now.”

For domestic students on campus, the familiarity of home can be lost when they arrive for their first semester, but for most, the feeling can be easily found again with a weekend trip home. This year’s freshman class saw 1,403 of its 1,563 students hailing from the Northeast, according to the Office of Analytics and Institutional Research. But for international students, first-year nerves are maximized due to the unfamiliarity of establishing a life in a new country. However, many international students have combatted this uneasiness by recreating a sense of home on the college’s campus through the relationships they build, clubs and the college’s
international orientation.

Freshman Khangelani Mhlanga said she found friends with similar cultural backgrounds after leaving her home in Zimbabwe to begin her academic career in veterinary medicine.

“I never felt isolated,” Mhlanga said. “I’m part of the African Students Association, which definitely helped in terms of hanging out with people, because although it’s a really big continent, we have a lot of similarities. Like, if we’re talking about home and moms being crazy, it will literally be the same story.”

Mhlanga said she recreated aspects of Zimbabwe to make Ithaca feel more like home through cooking, wearing African clothing and keeping African dorm decor in her room. She said that holding onto where she came from made her transition easier and made Ithaca feel familiar.

“Not letting go of things of home makes it feel like home because I know sometimes people are like, ‘They should start all over,’ but I think it is important to take your aspects of home and bring them in,” Mhlanga said. “Like I still cook food from home and wear clothing from home.”

Mhlanga said one type of food from home that she tries to recreate in her dorm room is called Sadza, which is one of Zimbabwe’s staple foods. Sadza is a thick porridge made out of maize meal that can be eaten with collard greens and meat stew, or collard greens and peanut butter. Mhlanga can also often be spotted on campus wearing African print skirts with a wrap called a Zambia, which is named after the country in East Africa that it originated from.

Mhlanga also said that incorporating parts of her culture into her dorm room made the feeling of home more prevalent.

“I have a sculpture of our national bird, pictures from home, cooking utensils from home, a sheet that says ‘Zimbabwe,’ a flag and food from home,” Mhlanga said. 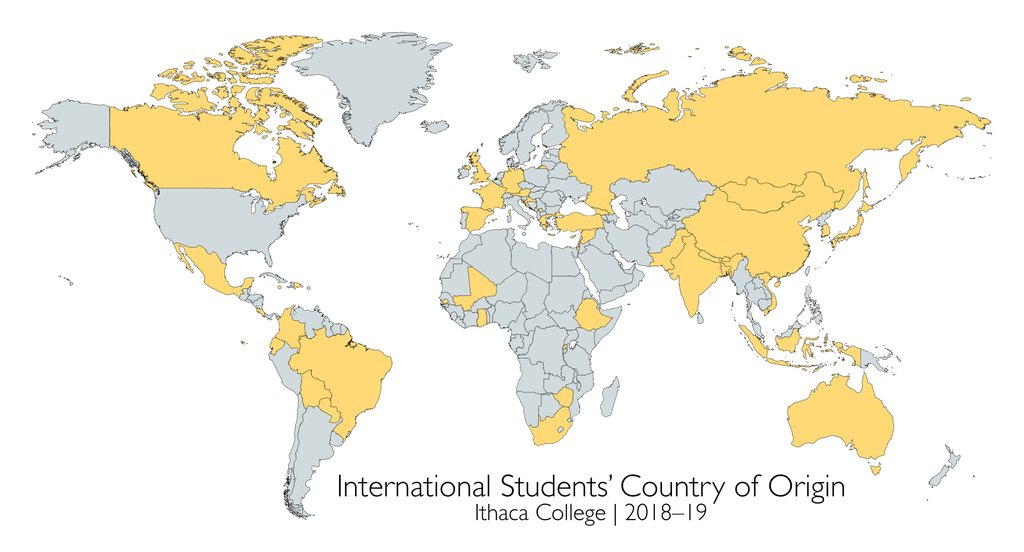 Some international students said they have felt comfortable since their first day on campus, beginning with the college’s international orientation. This orientation is designed to facilitate their acclimatization into a different cultural environment. They discuss the basics of college and a United States college classroom. The majority of international students participating in this orientation quickly build close-knit connections with people undergoing similar transition experiences. Many said that there, they found their group of people who now feel like family.

Diana Dimitrova, director of International Student Services, said the international orientation, along with several other opportunities, allows students to connect to services and people who can help them transition into their new, temporary homes.

“We do our best to connect them to the Ithaca College family because that is a big part of the transition,” Dimitrova said. “We know that international orientation is the one time that we have everyone together. We offer multiple opportunities for people to check in. Each cluster of students has a pal that they form a relationship with. There’s an international support group called the International Conversation Group that happens every Thursday.”

Freshman Bryan Wood, from Ghana, said the orientation allowed him to grow comfortable while embarking on his new academic journey with people in similar situations.

“I felt welcomed the very first day at international orientation just because I was surrounded by international students and we made this group of friendships, so we’re all close together even though we don’t see each other all the time,” Wood said.

Mhlanga said joining clubs last semester encouraged her to share more about herself; however, she said she would like to share more. As part of the college’s International Club, she partook in the annual One World Concert, where she could contribute something from her home in Zimbabwe along with other students from diverse backgrounds.

“It’s a chance for you to educate people about your culture and show them parts of it that they might have never heard or seen before,” Mhlanga said. “It’s important to have people who are passionate about sharing their favorite parts of their community that are easily overlooked.”

Freshman Leticia Guibunda, who is from Brazil, said she is also eager to share what her home is like with other students by starting conversations with them about it. She said she hopes that sharing her culture and background with others will help to recreate a part of her home in Brazil here.

“I think I’ve shared my culture through the International Club, mostly,” Guibunda said. “I participated in their photo campaign for us to tell a little about our country, our culture, and during my classes, whenever someone asks or there is an opportunity to share my perspective about my culture, I try to share as well.”

Guibunda said the people she’s met and built friendships with at the college have come to feel like family.

“The people that I talk to, I feel they get where I’m coming from, so I get that feeling of home,” Guibunda said.

Sandy Kelley, associate director of Transfer, International and Graduate Admission, said the main goal of the international departments on campus is to make the college a place where international students feel like they can speak to anyone.

“Our focus is to work with students so they know there is an individual connection,” Kelley said. “There’s the one-on-one sort of feeling that they are really welcomed at Ithaca College and they know a person to contact and not just an office or something impersonal.”

Dimitrova also said that the transition for each individual student is different and that there are many obstacles that some students face in hopes of having a smooth transition to college life.

“The experience of transitioning tends to be different for everyone,” Dimitrova said. “The transition of living in this climate zone and colder temperatures are, of course, complicated, and the transition to a very different academic system in terms of how to teach, how to test, how to interact and those things.”

Becoming accustomed to college life is not the only hurdle international students have to face. Under President Donald Trump’s administration, some have had to navigate political uncertainty, specifically when Trump signed an executive order Jan. 27, 2017, that severely restricted travel from seven Muslim-majority countries. At the time, two students were affected. Dimitrova said that when this happened, her office provided as much support as it could to help those students directly affected. The college also offered free housing to international students during summer 2017 to help as well.

“We had an immigration attorney come when the ban was initially put in place, and she also came at the end of last semester to … do an overall review of all those things that have happened and also of what has changed and what hasn’t changed,” Dimitrova said.

Despite a the challenges international students may face in transitioning, many students  said they believe the services at the college help them through tough situations.

Junior Marcos André from Brazil said he is able to call Ithaca his home based on what “home” means to him.