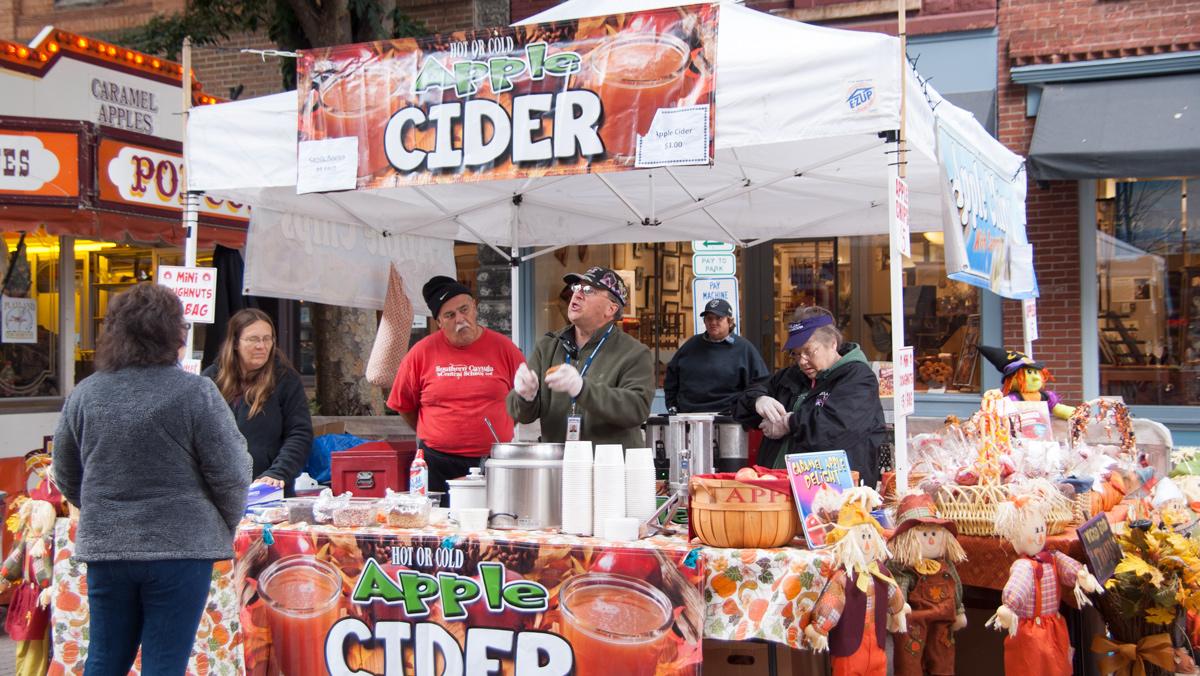 File Photo / The Ithacan
After being significantly smaller in 2020 due to the COVID-19 pandemic, the Ithaca Apple Fest will make its return to its previous size.
By Sarah Marsh — Contributing Writer
Published: September 29, 2021

Amid the busy and bustling sights and sounds of the Ithaca Farmers Market, vendors pour cup after cup of hot apple cider for eager patrons, steam rising off every drink. Their local, Ithaca-based farms are busy with preparations for an upcoming town event widely anticipated by residents and visitors alike — the Annual Apple Harvest Festival.

The 39th Annual Apple Harvest Festival — or Apple Fest, for short — is a long standing tradition in Ithaca. The festival will be held from noon to 6 p.m. Oct. 1 and 10 a.m. to 6 p.m. Oct. 2 and 3 on The Commons and promises a weekend full of fresh apples and apple–based treats, food trucks, live music and artisan goods. Organized by the Downtown Ithaca Alliance (DIA), Apple Fest is about to round out its fourth decade of operation.

The event is making a return to its traditional, large–scale format after a modified version of the festival, Apple Festive, was presented in 2020. To comply with social distancing and COVID-19 safety policies, Apple Festive featured an open-air market and apple and cider trail, but presented fewer vendors and activities.

While Apple Fest will be returning this year, other festivals have not been as fortunate. PorchFest, an annual music festival that highlights artists throughout Ithaca, was cancelled just 40 days before its scheduled date. The organizers cited “extensive delays” in the permitting process as well as concern for the ability to follow safety guidelines as cause for the cancellation.

There is no word yet on other future festivals like Ice Fest, which traditionally takes place every December. The DIA is taking its time to assess the local health status as it plans its events, and as it continues preparations for this year’s Apple Fest, it has asked potential attendees to continue to “check back for updates and details about attending the festival safely.”

Allison Graffin, the marketing director for the DIA, said this year the DIA is aiming to bring Apple Fest back to the strength of previous years. Graffin said Apple Fest is important to apple farmers and vendors due to the crowds that it draws and the esteem it is held to.

“The whole community has had to change,” Graffin said. “It’s an optimistic sign that we can have this as a large gathering for both the farmers that are selling produce and our craft vendors.”

Amara Steinkraus, co-owner of family–run Littletree Orchards, said she is all too familiar with the struggles the COVID-19 pandemic has posed for the festival.

“In its incarnation, [Apple Fest] was really started to kind of bring local farms downtown, bring business downtown. And I think the COVID pandemic has really been a struggle for a lot of small businesses,” said Steinkraus, whose mother was a part of the original committee that founded Apple Fest in 1985. “My hope is that the festival can happen without a hitch and that people are safe and responsible so that we can kind of help support all of our amazing local businesses.”

Steinkraus said Littletree Orchards is busy preparing for the return of Apple Fest to a larger capacity for the 2021 season.

“We’re just really excited about being down on The Commons,” Steinkraus said. “We’ll have our donut machine down there. We make lots of fresh cider doughnuts and we’ll have all of our fresh cider. One thing that is special is that this time of year, we always do a limited run of our pear apple cider, which is half pear, half apple and super delicious. And a lot of people kind of wait every year for that to happen.”

Similarly, the return of Apple Fest for the 2021 season has been long awaited by Ithaca College students. Upperclassmen are eager to return to a fall favorite and freshmen are ready to experience an Ithaca classic for the first time. Junior Alex Stewart said she’s excited to return to the festival for the lively atmosphere and the apple slushies.

“I’m definitely looking forward to buying a ton of different food because everything there was so good,” Stewart said. “I’m also excited to just walk around the festival because it gives off good vibes.”

Stewart also said she has happy memories of attending Apple Fest during her freshman year. She said her family came up to attend the festival with her in 2019.

“It was the first community event that I ever went to in Ithaca,” Stewart said. “My family drove up to Ithaca to visit me, so we got to try all of the different foods together. Everyone in The Commons looked like they were having a great time”.

The festival is a popular event for many students across campus. For this year’s freshmen and sophomore classes however, Apple Fest is a brand–new experience. Sophomore Emma Rockey said she is nervous, but eager to attend the festival for the first time, because this is only her second semester on campus.

“I’ve never been,” Rockey said. “I’ve heard great things about it though. I’m looking forward to some fresh apples. We have apple farms at home and my family goes and gets some each year.”

Amid all the excitement for the festival, Rockey said she is concerned about how a large event at full-capacity will affect COVID-19 cases.

“My main concern is crowds with delta variant cases rising,” Rockey said. “I worry about people traveling in for Apple Fest and spreading COVID into this community, especially when they likely won’t be wearing masks outside. Hopefully people will mask up while there.”

With COVID-19 cases rising in the county, others share the same sentiment. Junior Claire Thompson said part of preparing for the fun of Apple Fest is also planning to stay safe.

“I really hope people will be conscious of the health of themselves and others and be tested for COVID before and after attending,” Thompson said. “I would hate for Apple Fest to go down as a super-spreader event. I am hopeful people will be wise and considerate and that the organizers have taken precautions. From what I remember most of it was outdoors anyway, which is a great way to keep safe and enjoy the last of the sun and warmth in Ithaca.”

This article was done with additional reporting from Elijah de Castro, assistant life and culture editor.