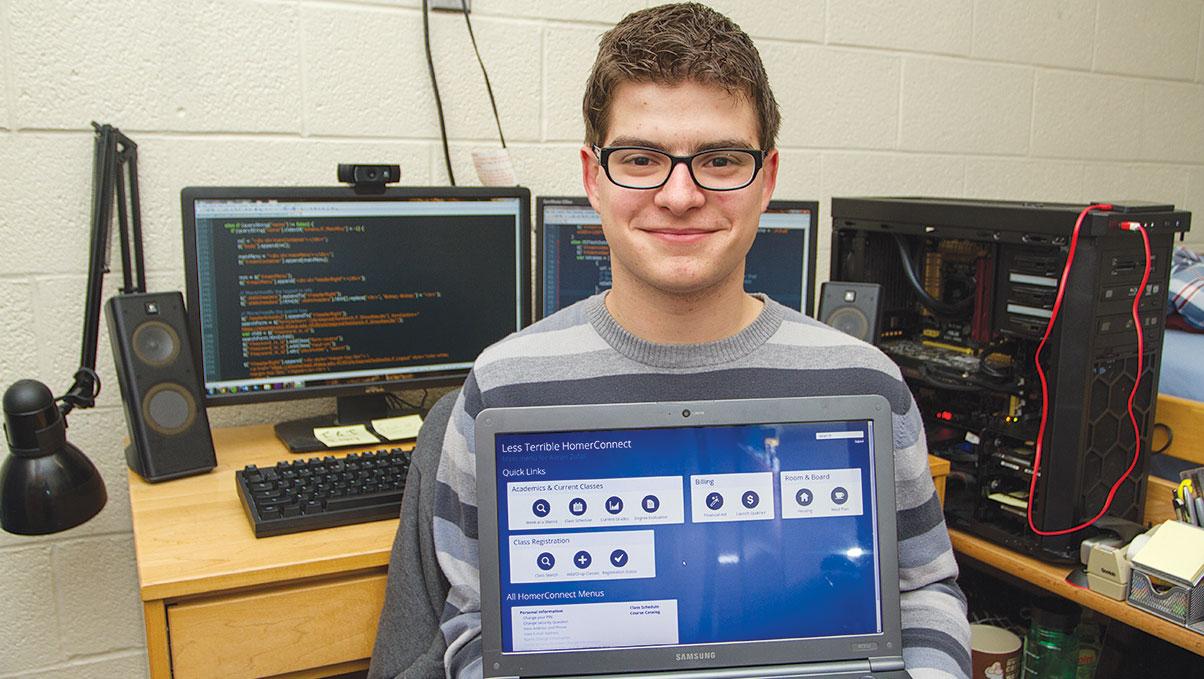 For many Ithaca College students, the HomerConnect website is a maze of links, tabs and information that can be confusing to navigate. However, some students have become increasingly frustrated with the website, creating a significant resistance toward one of the college’s major communication outlets to the student body.

His creation is called the “Less Terrible HomerConnect,” a Google Chrome extension that Zufall said maintains the fundamentals of the original website but reorganizes them in way that is more visually appealing and easier to understand.

Zufall said he initially thought of giving the site a makeover the first time he used HomerConnect at class registration during the freshman summer orientation.

“I really just made it for myself, and then a bunch of people were like, ‘Hey, you should make this a thing,’” Zufall said. “And so, I figured the best way to do it would be through a browser plug-in, so I just sat down for a couple hours and figured out how to make one,” Zufall said.

The new site allows for an easy-to-understand menu, located on the homepage, and features the most popular assets of HomerConnect, such as the “Week at a Glance,” “Financial Aid” and “Housing” tabs.

“If you load HomerConnect, it realizes that’s what you’re doing, and then what it actually does is build a new website on top of the old one,” Zufall said. “So, on the main menu, if you were to actually go into the code and delete some of it, you could actually see that normal HomerConnect is just sitting underneath it. So it actually just builds this less-awful facade on top of it so that it’s easier to navigate.”

Zufall’s roommate, freshman Jeremy Block, helped Zufall make the Chrome extension a public application for anyone to use.

“Aaron has a technical ability beyond most freshman computer scientists,” Block said. “I really encouraged him to make his plug-in available on the Chrome Web Store, and I think it’s become a really big success.”

After examining the new browser plug-in for the first time, Registrar Brian Scholten said the “Less Terrible HomerConnect” layout was appealing and user-friendly, but he did see some weaknesses.

“On the new version this student has created, we noticed that there are no targeted messages when students login,” Scholten said. “Usually, the office will provide students a notification of upcoming events like class registration when they login. And, the current schedule [on Zufall’s version] is the ‘Detailed Student Schedule,’ not the ‘Concise Student Schedule,’ which is much easier for printout.”

According to Scholten, there have been talks between Information Technology Services and the Office of the Registrar on how to improve HomerConnect, as well as student discussion groups that provide a chance for improvement.

“We are aware it could be easier to use,” Scholten said.

However, Scholten said there is little the school can do to change the website quickly because Ellucian Company L.P., the creators of HomerConnect, makes it difficult for the college to update the site whenever it sees fit, due to the fact that the upgrades can only come from the company.

“The college wants to do something, but if [HomerConnect] comes straight out of a box, we can’t make a ton of changes,” Scholten said.

Despite some challenges in the renovation of the site, Zufall said he is hopeful for the future.

“I’d love to build an entirely new HomerConnnect,” Zufall said. “If someone came up to me and said, ‘Hey, we need you to make a totally new system that we’re going to use,’ I have the capability to do that, I really hope that Ithaca will consider adopting this new version.”